Fluoroquinolone and Other Antimicrobial Resistance in Invasive Pneumococci, Hong Kong, 1995–2001

Stored isolates of S. pneumoniae were obtained from the blood and cerebrospinal fluid (CSF) of patients admitted to five hospitals in Hong Kong during 1995 to 2001. These five hospitals were chosen because they represent the same sentinel network that participated in an earlier study conducted by the same group (4). One hospital did not store the isolates and thus was not included in the present study. The following numbers of isolates were obtained from each of the hospitals: A (140 isolates from 1995 to 2001), B (22 isolates from 1996 to 2001), C (34 isolates from 1997 to 2001), D (64 isolates from 1998 to 2001), and E (5 isolates from 2001). All are public hospitals that provide acute patient care, including all the major specialties. Hospital A is a university teaching hospital with a bone marrow transplant unit, and the others are regional hospitals. Hospitals A and B are located in the same region, and they together serve a population of approximately 1.4 million. Hospitals C, D, and E serve populations of 0.6, 1, and 0.4 million, respectively. Thus, this network together serves approximately 53% of the 6.5 million population in Hong Kong. Isolates included in this study represented all the invasive pneumococcal case-patients with a positive blood or CSF culture in the stated periods. All invasive isolates were tested for antimicrobial susceptibility. Only one isolate from the same patient episode of infection was included. Three patients had two episodes of infections separated by intervals of 3months to 2 years. All isolates were subcultured and reidentified by considering the following characteristics: colony morphologic features, Gram stain results, optochin susceptibility, and bile solubility. Isolates were stored at –20°C until they were tested in batches.

E-test strips of penicillin, amoxycillin (as amoxycillin-clavulanate 2:1), cefotaxime, cefepime, clarithromycin, vancomycin, ciprofloxacin, levofloxacin, sparfloxacin, gatifloxacin, and moxifloxacin were purchased from AB Biodisk, Solna, Sweden. E-test MICs were determined following the manufacturer’s instructions. All susceptibility testing was conducted in a single laboratory at the University of Hong Kong. Test inocula were prepared from pneumococcal colonies grown on sheep blood agar that had been incubated for 20 to 24 h in 5% CO2. Colonies were suspended in 0.9% saline to obtain a suspension equivalent to a 0.5 McFarland standard of turbidity. From this suspension, E-tests were performed on Mueller-Hinton agar with 5% sheep blood (BBL, Becton Dickinson Microbiology Systems, Cockeysville, MD). The plates were incubated at 35°C in 5% CO2 for 20 h to 24 h. MICs falling between two marks on the E-test strip were rounded up to the next higher twofold dilution, as recommended in the instructions. For all MIC determinations, the bacterial inocula were validated by back titration in 10% of the tests to ensure the desired inoculum density. Quality control strains (S. pneumoniae ATCC 49619, Staphylococcus aureus ATCC 29213, and Escherichia coli ATCC 25922) were included with each run. Results were interpreted according to published breakpoints of the National Committee for Clinical Laboratory Standards (5). The term nonsusceptible was used to denote both intermediate and resistant isolates. For ciprofloxacin, the criteria were susceptible, <2 μg/mL; resistant, >4 μg/mL.

All isolates were serotyped by the quellung reaction (6) with sera of various levels of reactivity from the Statens Seruminstitut (Copenhagen, Denmark). The subset of 11 isolates with resistance to ciprofloxacin was examined further by multilocus sequence typing (MLST) and by HinfI restriction analysis of their pbp 2b and 2x genes (7). The well-defined Spanish clones of serotypes 23F and 6B (SP264 ATCC 700669 and GM17 ATCC 700670, respectively) and a strain representative of the fluoroquinolone-resistant variant Hong Kong23F-1 clone were used as controls (4).

The quinolone resistance–determining regions of gyrA, gyrB, parC, and parE were amplified by using primers described previously (8). Nucleotide sequencing was performed by the ByeDye dideoxynucleotide chain termination method (Applied Biosystems, Hong Kong). The sequences of both strands of the amplicons were determined.

Chi-square or Fisher exact test was used for statistical analysis. A p value of <0.05 was considered significant.

In children (ages <12 years), the rate of penicillin nonsusceptibility was significantly higher than that in adults (>13 years of age) (48% vs. 30.9%, respectively; p = 0.005). In general, MICs of penicillin were identical or within one dilution difference of that of amoxicillin. For these two penicillins, the MIC50, MIC90, and mode MIC values were identical. On the other hand, MICs of cefotaxime were generally one dilution lower than that of cefepime. High MICs of penicillin (4 μg/mL) and cefotaxime (4 μg/mL) were found in 2 (0.8%) and 1 (0.4%) of 265 isolates, respectively.

Of 265 isolates, 8 isolates could not be typed; 34 different serotypes were identified among the remaining isolates. The serotype distribution of the isolates according to age group of patients and penicillin resistance is shown in Table 2. Serotype 14 was the most common serotype (24.5%). Four serotypes (6B, 14, 19F, and 23F) accounted for 92.9% of all penicillin-nonsusceptble isolates and 84.5% of all clarithromycin-nonsusceptible isolates. The capsular serotypes of the levofloxacin-resistant isolates were 14 (n = 4), 19F (n = 2), and 23F (n = 4). Serotypes included in 7-valent pneumococcal conjugate vaccine formulations (4, 6B, 9V, 14, 18C, 19F, and 23F) comprised 90.4% and 90.6% of penicillin- and clarithromycin-nonsusceptible strains isolated from persons with age <5 years, respectively. Coverage of the 7-valent conjugate vaccine for all isolates from young children (<5 years of age) was 89.7% (79/88). Serotypes included in the 23-valent pneumococcal polysaccharide vaccine accounted for 92.9% of penicillin-nonsusceptible and 91.1% of clarithromycin-nonsusceptible isolates for all ages, respectively. 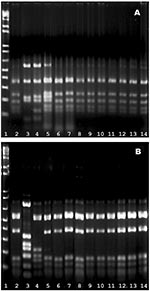 Our findings show that invasive pneumococci with fluoroquinolone resistance in this locality were related to the multidrug-resistant Spanish 23F clone. Three different serotypes were identified among the 10 clonally related levofloxacin-resistant isolates, indicating that this clone is evolving by horizontal transfer of the capsular genes. Elsewhere, early evidence suggested that epidemic clones could be playing a role in dissemination of fluoroquinolone resistance. In an analysis of 29 fluoroquinolone-resistant pneumococci, McGee et al. reported that 6 isolates from Ireland and 1 from France were indistinguishable from the Spain9V-3 clone (14). In Birmingham, George et al. recently reported that two fluoroquinolone-resistant variants closely related to the widely distributed penicillin-resistant Spanish9V-3 clone were emerging (15). Furthermore, Alou et al. report that 30% of 82 pneumococci with reduced susceptibility to ciprofloxacin from 20 hospitals in Spain belonged to two internationally spread clones: France9V-3 and Spain23F-1 (16). The emergence of fluoroquinolone resistance among the internationally distributed S. pneumoniae clones is of concern. The Hong Kong experience is an example of how resistance to the fluoroquinolones could evolve rapidly in pneumococci as a result of clonal expansion.

This study found a high rate of macrolide resistance among the invasive pneumococcal isolates, as was reported for noninvasive isolates (4). This circumstance is likely related to the high local use of macrolides and the dissemination of several drug-resistant clones (17). Among invasive isolates, our figure was similar to that reported in Taiwan (72%) but was higher than those reported from the United States (20.4%), Canada (14.8%), or Germany (15.3%) (18–21). Despite early skepticism, increasing evidence shows that in vitro macrolide resistance does result in clinical and microbiologic failures in systemic pneumococcal infection (22,23). Hence, in the empirical treatment of community-acquired pneumonia, our findings imply that monotherapy with a macrolide is not appropriate in this region.

Our data show that 90% or more of the resistant pneumococci that cause invasive infections in persons of all ages belonged to serotypes that are included in the 23-valent pneumococcal polysaccharide vaccine as well as the 7-valent conjugate vaccine. The 7-valent conjugate vaccine is indicated in young children and is highly effective in preventing vaccine serotype-related invasive diseases (24). In the United States, the 7-valent conjugate vaccine was added to the routine schedule in 2000. According to Whitney et al. (25), after the conjugate vaccine was introduced, the rate of invasive disease caused by vaccine and vaccine-related serotypes has markedly declined. The rate of disease caused by strains that were not susceptible to penicillin was 35% lower in 2001 than in 1999. The rate of disease in adults also declined (25). From the results of trials reported so far, the vaccine will likely also reduce carriage of vaccine types of pneumococci (26,27). Hence, resistant pneumococci might diminish as the vaccine becomes more widely available (25,28). The effectiveness of the 23-valent polysaccharide vaccine has not been as dramatic. In older adults, vaccination with the polysaccharide vaccine effectively reduced the rate of bacteremia but not that of nonbacteremic pneumonia (29). The use of the 23-valent pneumococcal vaccine in Hong Kong is low (with estimated coverage of <10% for those >65 years). While data on the efficacy of the 23-valent pneumococcal vaccine are considered insufficient in patients with chronic obstructive pulmonary disease (30), the benefits of vaccinating elderly people with the 23-valent pneumococcal vaccine are clear (31). In view of the findings from this and our previous study that the elderly and persons with chronic obstructive pulmonary disease are at high risk of developing infection by fluoroquinolone-resistant S. pneumoniae, we believe both patient groups in this locality should receive pneumococcal vaccine.

In conclusion, this study reported high rates of fluoroquinolone resistance among multidrug-resistant strains of pneumococci that cause invasive infections among older adults in Hong Kong. Our experience leads us to call for a more prudent use of fluoroquinolones in all clinical settings. Since carriage of pneumococci is common, collateral exposure could occur anytime a person is treated with fluoroquinolones for any infection, including skin, soft tissue, or urinary tract infections. In patients with chronic obstructive pulmonary disease, high-density colonization of the airway is common, which could explain why these patients are at high risk for fluoroquinolone-resistant pneumococci (9). In young children, high numbers of pneumococci are frequently found in the nasopharynx. If fluoroquinolone use is extended from adults to children, who are frequently colonized by the antimicrobial-resistant serotypes, transmission and spread of fluoroquinolone-resistant strains would occur rapidly in the community (32). For pneumonia, all evidence so far indicates that infection caused by pneumococci intermediately resistant to penicillin (MIC <1 μg/L or 2 μg/mL) should respond well to a penicillin given in appropriate doses. In view of this and the emergence of fluoroquinolone resistance in both noninvasive and invasive isolates in this locality, we believe that fluoroquinolones should not be used as first-line treatment in community-acquired pneumonia. In local guidelines, amoxicillin-clavulanate or the combination of amoxicillin and a new macrolide are the recommended first-line drugs for empirical treatment of community-acquired pneumonia in the outpatient setting. As pneumococcal infections become increasing difficult to treat, public health authorities should give priority to pneumococcal vaccination of persons at high risk of acquiring infections by the resistant pneumococci. Since substantial changes can occur in a short period, fluoroquinolone-resistant isolates must be monitored and tracked as part of ongoing and routine pneumococcal surveillance.

Dr. Ho is associate professor in the Department of Microbiology, University of Hong Kong. His research interests include emerging infectious diseases and antimicrobial resistance.

This work was supported by grants from the Health Care and Promotion Fund Committee, the Committee on Research and Conference Grants and Bristol-Myers Squibb (Hong Kong) Ltd.