Distribution and Characteristics of Escherichia coli Clonal Group A1

Among 1,102 recent Escherichia coli clinical isolates, clonal group A was identified in 17 of 20 (U.S. and non-U.S.) geographic locales, mainly among U.S. isolates (9% vs. 3%; p < 0.001) and those resistant to trimethoprim-sulfamethoxazole (10% vs. 1.7%; p < 0.001). The extensive antimicrobial resistance and virulence profiles of clonal group A may underlie its recent widespread emergence.

To date, CGA has been studied only within the United States, predominantly among women with uncomplicated urinary tract infections (UTI). Its occurrence in some locales has been questioned (5), and its antimicrobial susceptibility profile has been assessed for only 12 drugs (1,2,6). Accordingly, we sought to more fully define the global distribution, host range, virulence characteristics, and resistance phenotypes of CGA.

Twenty clinical microbiology laboratories (10 U.S., 10 non-U.S.) each provided approximately 25 consecutive TMP-SMZ–resistant and TMP-SMZ–susceptible E. coli isolates, except for 2 that provided resistant isolates only (Table 1). Isolates were distributed by specimen type (urine/other) and source (inpatient/outpatient). Antimicrobial drug–resistant and –susceptible isolates were collected approximately concurrently in 2001 from each site, except London (1999) (7) and Columbus (1999 and 2002). When available, data regarding specimen type and host gender, age, and inpatient/outpatient status were provided.

CGA isolates and (2:1) geographically matched controls selected randomly based on the local TMP-SMZ resistance prevalence were tested for 35 ExPEC-associated virulence markers and 13 papA alleles by PCR (2). Such typing predicts experimental in vivo virulence (9). Isolates were defined as ExPEC if positive for > 2 of papA and/or papC, sfa/foc, afa/dra, iutA, and kpsM (10). The aggregate virulence score was the number of different virulence markers detected in an isolate, adjusted for multiple detection of certain operons.

Susceptibility testing of the isolates to 30 drugs was carried out by broth microdilution (11) or disk diffusion (nitrofurantoin) (11), by using E. coli ATCC 25299 for reference and National Committee for Clinical Laboratory Standards (NCCLS)–specified interpretative criteria (12), except for kanamycin, spectinomycin, and streptomycin (resistant at MICs of >25 mg/L, >128 mg/L, and >8 mg/L, respectively). The aggregate resistance score was the number of different agents to which an isolate exhibited resistance.

The 1,102 clinical E. coli isolates were divided evenly by U.S. and non-U.S. origin and TMP-SMZ resistance status (Table 2). Overall, phylogenetic group B2 predominated (44%), followed by group D (27%). Group D was significantly more prevalent among U.S. than non-U.S. isolates (34% vs. 21%: p < 0.001). TMP-SMZ–resistant isolates exhibited significant shifts from group B2 toward groups A, D, or both. The nearly 2-fold greater prevalence of group D among TMP-SMZ-resistant isolates reversed, for U.S. isolates, the “B2 > D” pattern of susceptible isolates.

By RAPD analysis, 23% of group D isolates (6% overall) represented CGA (Table 2). CGA was strongly associated with TMP-SMZ resistance (10% of resistant isolates, 1.7% of susceptible: p < 0.001) and a U.S. origin (9% vs. 3%: p < 0.001). CGA accounted for 15% of U.S. TMP-SMZ–resistant isolates and 5% of those from abroad (p < 0.001), but for a similarly low proportion of U.S. (2%) and non-U.S. (1.5%) susceptible isolates. According to multivariate logistic regression analysis, after accounting for TMP-SMZ resistance and U.S. origin, none of the other source variables (specimen type and host gender, age, and inpatient/outpatient status) was significantly associated with CGA status or appreciably altered the association of TMP-SMZ resistance or U.S. origin with CGA status (not shown). 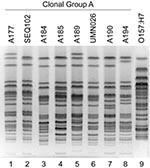 CGA occurred in all but 3 locales (1–10 isolates per locale), accounting for up to 29% of local resistant isolates (median, 9.5%) (Table 1). CGA was highly prevalent (20%–25%) among resistant isolates from the 3 pediatric centers (Columbus, Houston, and Toulouse) and the veterans’ hospital (Tucson). Toulouse exhibited the highest non-U.S. CGA prevalence, whereas nearby Brest lacked CGA (Table 1). CGA accounted for 29% of the ostensibly nonclonal (5) TMP-SMZ–resistant isolates from Chicago. Consistent with this, XbaI PFGE profiles of 6 Chicago and 2 reference CGA isolates were highly similar (Figure 1).

CGA isolates differed significantly from controls, according to almost all characteristics analyzed; they were significantly enriched with the O11, O17, and O77 antigens, certain VFs (F16 papA allele, papAHCEFG, papG allele II, iha, iutA, kpsM II, traT, and ompT), and ExPEC status, but lacked other traits (Figure 2). Aggregate virulence scores were similar for CGA and controls (medians, 8.0) but were less diverse for CGA (range 5–9, vs. 1–13).

Antimicrobial resistance phenotypes were compared between CGA isolates and a subset of the controls, which had been selected to provide an unbiased distribution of TMP-SMZ resistance (Figure 2). CGA exhibited a higher prevalence of resistance to 10 individual drugs, any drug, and ACSSuTTp, whereas controls exhibited a low but measurable prevalence of resistance to 7 drugs to which all CGA isolates were susceptible. Accordingly, resistance scores were significantly higher for CGA than controls (median 8.0 [range 1–11] vs. 5.5 [range 0–15]; p = 0.001). Among TMP-SMZ–resistant isolates, TMP-SMZ MICs ranged from 32/608 mg/L to >520/9,880 mg/L; 61% of resistant isolates had MICs >520/9,880 mg/L. CGA accounted for 67% of this highly resistant population (p = 0.01 vs. controls).

We found that the recently described E. coli CGA is globally but heterogeneously distributed and more prevalent within the United States than abroad. Clonal group A affects diverse host populations (including inpatients, outpatients, adults, children, men, and women), infects urinary tract and nonurinary tract sites, is strongly associated with TMP-SMZ resistance (including high-level resistance), and exhibits a robust virulence profile suggesting enhanced extraintestinal virulence. This combination of resistance and virulence may account for CGA’s recent emergence as a broadly disseminated “epidemic clone” (1–3,6,13,14).

The greater overall prevalence of CGA within the United States suggests a U.S. origin for CGA. However, it also could reflect more rapid clonal expansion within the United States due to enhanced dissemination or more favorable conditions for outgrowth, including possibly less competition from other potential occupants of the same niche(s). The variable prevalence of CGA among even closely situated locales, both within the United States and abroad, might reflect true geographic heterogeneity, versus locale-specific differences in patient populations, selection criteria, and collection intervals. Studies that compare well-defined, homogeneous, concurrent populations from different locales are needed.

The new evidence of CGA as a prominent TMP-SMZ–resistant pathogen among children and veterans extends the known host range of CGA, consistent with a recent report of CGA as a community-wide TMP-SMZ-resistant pathogen in Denver, Colorado (6). This finding illustrates CGA’s pathogenic versatility.

That 29% of the TMP-SMZ–resistant isolates from Chicago, Illinois, proved to be CGA and resembled reference CGA isolates by PFGE, despite a previous PFGE-based assessment of nonclonality (5), illustrates the limitations of conventional PFGE analysis as a screen for CGA. We have developed a CGA-specific PCR assay, based on a single nucleotide polymorphism within fumC, to provide improved screening for CGA (15).

In our study, antimicrobial resistance was more extensive and, with TMP-SMZ, more potent for CGA than controls. These factors may be contributing to CGA’s global emergence. Conceivably, high-level TMP-SMZ resistance could allow CGA to out-compete even other TMP-SMZ–resistant strains. CGA’s resistance involved primarily older agents, whereas fluoroquinolone and cephalosporin resistance was confined to controls. However, the emergence of fluoroquinolone resistance within the closely related O15:K52:H1 clonal group (2,13) suggests that this potential exists also for CGA.

The study’s strengths include large population, broad geographic sampling, matching of CGA and control isolates, and extensive range of traits analyzed. Limitations include the heterogeneous inclusion criteria, gaps in global surveillance, possible type I errors from multiple comparisons, and limited sampling per locale.

In summary, we found CGA to be a globally disseminated, multidrug-resistant clonal group of pathogenic E. coli with a broad range of human hosts. Although more prevalent within the United States than abroad, CGA exhibits characteristic O antigens, resistance markers, and virulence traits wherever encountered. Further study is needed of the origins, virulence mechanisms, geographic distribution, clinical associations, and modes of dissemination of CGA.

This material is based upon work supported by Office of Research and Development, Medical Research Service, Department of Veterans Affairs, and by Bayer Inc., Merck, and Procter & Gamble (J.R.J.). J.R.J. has received grants, honoraria, or both, from Bayer, Merck, Ortho-McNeill, Procter and Gamble, and Wyeth-Ayerst.

Distribution and Characteristics of Escherichia coli Clonal Group A