Death rates exceeded emergency thresholds at 4 sites during epidemics of Plasmodium falciparum malaria in Burundi (2000–2001) and in Ethiopia (2003–2004). Deaths likely from malaria ranged from 1,000 to 8,900, depending on site, and accounted for 52% to 78% of total deaths. Earlier detection of malaria and better case management are needed.

Plasmodium falciparum malaria epidemics are poorly documented, partly because they occur in remote, underresourced areas where proper data collection is difficult. Although the public health problems from these epidemics are well recognized (1,2), quantitative evidence of their effect on death rates is scarce (3). Hospital-based death data, when available, provide a grossly incomplete picture because most malaria patients do not seek healthcare and, thus, these cases are not reported (4). Thus, current estimates (2) rely on extrapolations of limited site-specific or empirical observations. Accurate information is needed not only to improve our knowledge of malaria epidemics, but also to assess progress of malaria control initiatives that aim to decrease deaths from malaria worldwide by 50% by 2010 (5). We report community-based death rates from 2 P. falciparum malaria epidemics (Burundi, 2000–2001; Ethiopia, 2003–2004) in which Médecins Sans Frontières intervened. 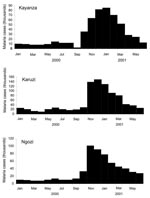 During the epidemics, a retrospective survey of deaths was conducted at each site. Surveys were approved by local authorities, and respondents gave oral consent. Thirty clusters of 30 households were selected by using 2- or 3-stage sampling (8). Households were defined as groups of persons who slept under the same roof under 1 family head at the time of the survey; occasional visitors were excluded. Selection within each cluster followed a standard rule of proximity (9). Information collected included number, age, and sex of persons living in the household; number of deaths (age, sex, and date of death) since the beginning of the recall period; and cause of death. Malaria was defined as the probable cause if a decedent’s household reported “presence of fever” (Burundi) or “fever and shivering without severe diarrhea or severe respiratory infection” (Ethiopia). Recall periods were defined by easily recognizable starting dates (Table 1).

Data were analyzed by using EpiInfo (Centers for Disease Control and Prevention, Atlanta, GA, USA). Death rates were expressed as deaths/10,000 persons/day, and 95% confidence intervals (CIs) were adjusted for design effects. Mortality rates were compared with standard emergency thresholds of 1 death/10,000/day (crude mortality rate [CMR]) and 2 deaths/10,000/day (under 5 mortality rate [U5MR]) (10). Excess number of deaths probably due to malaria was estimated by applying the specific death rates due to self-reported malaria to the population and time period covered by each survey.

We provide novel data based on representative population sampling, rather than health facility–based reporting. P. falciparum epidemics seem responsible for high death rates: the estimated number of deaths probably due to malaria at our sites (≈18,000) represents about 10% of the worldwide total estimated annual deaths due to epidemic malaria (2).

The limitations of retrospective mortality surveys are well known (11); hence, results should be interpreted with caution. Reporting bias was minimized by defining a limited recall period and by training interviewers extensively. In Kayanza, the survey was conducted before the epidemic peak; the estimated death rate may have been lower than average for the entire epidemic, which may have led to underestimation of the true death rate. Generally, postmortem diagnosis of malaria at the household level is difficult, and even advanced verbal autopsy techniques (not used in these surveys due to lack of skilled human resources) are of limited accuracy (12). Decedents’ next of kin may underreport or overreport certain signs and symptoms. Malaria deaths may thus have been overestimated, particularly in Burundi, where fever was the sole criterion of probable malaria; use of this 1 criterion may have masked other causes, such as acute respiratory infection. Furthermore, in 3 of the areas surveyed (Kayanza excepted), the epidemics occurred concurrently with nutritional crises. Malnutrition as a cause of death could not be assessed because of its implication in various infectious diseases, but high prevalence of malnutrition is usually associated with excess U5MR (13). Nevertheless, mortality rates among persons ≥5 years of age (CMR – [U5MR × proportion of children <5 years in survey sample]/[1 – proportion of children <5 years in survey sample]) were also elevated. Rates ranged from 0.5 in Kayanza to 1.7 in Damot Gale, higher than the expected rate of 0.27 in sub-Saharan Africa (14). In the absence of other specific causes of acute death for adults, we speculate that malaria was largely responsible for these excess deaths.

At all sites, early warning systems were not operational and surveillance was ineffective, which led to substantial delays in epidemic detection (6). First-line treatment regimens (chloroquine in Burundi, sulfadoxine/pyrimethamine in Ethiopia) were not very effective. In Damot Gale, access to treatment was poor (data not shown), probably due to the dearth of health facilities. All these factors may have exacerbated the epidemics and contributed to excessive death rates.

Early diagnosis and prompt treatment of malaria remain cornerstones of the global malaria control strategy (15). The degree to which these interventions will be made available will largely determine the death rates in future epidemics.

Dr Guthmann is a physician and senior epidemiologist who has worked at Epicentre since January 2000. Although his main interest is the epidemiology of malaria, he has also conducted research on other topics such as leishmaniasis and measles.

We are grateful to Médecins Sans Frontières personnel at headquarters and field staff who actively contributed to the studies.

Each survey was supervised by an Epicentre epidemiologist. The work was done in collaboration with National Ministries of Health, which authorized inspection of records and provided the necessary information when appropriate.

All surveys, as well as this review, were financed by Médecins Sans Frontières.