Neisseria meningitidis serogroup A is the major cause of meningitis outbreaks worldwide, especially in African and Asian countries, including India. Meningococcal disease is endemic in India, and sporadic cases of meningococcal meningitis have occurred in Delhi in previous years (1). During 1966, 616 cases of meningitis were reported; case-fatality rate was 20.9%. In 1985, an outbreak of greater magnitude had 6,133 cases with 799 deaths (13%). An outbreak of meningococcal meningitis also occurred in Delhi during April–July 2005 (1), and the disease reappeared in January–March 2006.

When a sporadic case or epidemic occurs, the close contacts need to receive a vaccine and chemoprophylaxis with antimicrobial drugs to cover the delay between vaccination and protection. Recently, ciprofloxacin and ceftriaxone have been established as acceptable alternatives to rifampin for prophylaxis of meningococcal disease (2). Because ciprofloxacin can be used in single doses during meningococcal epidemics, ciprofloxacin is the chemoprophylactic agent of choice (3). Because meningococcal disease is a serious and rapidly progressing illness, monitoring the trends in the resistance to antimicrobial agents is important. To date, ciprofloxacin-resistant serogroup A N. meningitidis has not been reported anywhere in the world. Four reports of sporadic instances of decreased susceptibility to ciprofloxacin: serogroup B from France in 1999 and Spain in 2002, serogroup C from Australia in 1998, and serogroup Y from Argentina in 2002 (4–6). For the first time, to our knowledge, we report the emergence of decreased susceptibility of serogroup A N. meningitidis to ciprofloxacin from the 2005 outbreak in Delhi.

Fourteen N. meningitidis clinical isolates were collected from the major hospitals in Delhi. All these isolates were from patients with meningococcal meningitis from the outbreak. The strains were isolated mainly from cerebrospinal fluid and a few from skin swabs; the primary culture, isolation, and serogrouping (Latex agglutination kit, Wellcogen, Wellcome, Dartford, UK) were performed in the respective hospitals. N. meningitidis strains from Ranbaxy Research Laboratories culture collection (RRL-1 and RRL-2) were used as reference serogroup A strains. In addition, 11 clinical isolates collected during the January–March 2006 recurrent outbreak were also included for selective antimicrobial drug susceptibility testing in this study.

The MICs of antimicrobial agents against these isolates were determined by the agar dilution method on Mueller-Hinton agar plates with 5% sheep blood as recommended by Clinical and Laboratory Standard Institute (CLSI) guidelines (7). The pulsed-field gel electrophoresis (PFGE) method used in this study was based on the procedures described by Popovic et al. (8). Two isolates (Ap-II 420 and Ir-I 442) from the outbreak were used for genotyping as described by Maiden et al. (9) and analyzed by using the multilocus sequence typing (MLST) database (10).

Because the N. meningitidis isolates showed resistance to ciprofloxacin, the DNA gyrase A quinolone-resistance–determining regions (QRDRs) of 2 ciprofloxacin-sensitive and 7 ciprofloxacin-resistant meningococcal strains from this outbreak and 2 reference strains were sequenced. The following primers were used for QRDR study. The forward primer was 5′-CGTACTGTACGCGATGCACGA-3′; the reverse primer was 5′-TTTCGCCATGCGGATTTCGGT-3′. The genomic DNA was isolated from the strains and PCR was performed as described by Shultz et al. (11).

The MIC pattern of the clinical isolates of N. meningitidis from the outbreak showed that they were susceptible to β-lactam antibiotics penicillin, ampicillin, and a third-generation cephalosporin, ceftriaxone. The MIC against ceftriaxone for all the clinical N. meningitidis isolates was <0.001 µg/mL. Of 14 strains, 12 showed decreased susceptibility to all the fluoroquinolones, especially to ciprofloxacin (MIC 0.25 µg/mL) (Appendix Table). In addition, all these 12 strains were resistant to nalidixic acid (MIC >16 µg/ml). A notable shift in antimicrobial susceptibility was not observed in these isolates against protein synthesis inhibitors (Appendix Table). Eleven meningococcal isolates from the recurrent outbreak showed resistance to ciprofloxacin as well as nalidixic acid (Table). The break points are based on the CLSI guidelines (7). 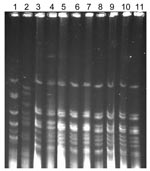 The PFGE patterns of the strains from the outbreak (9 strains) were indistinguishable, and they appeared to be from the same origin (Figure 1). The antimicrobial drug resistance patterns were not distinguishable from the PFGE types. The PFGE pattern of the strains from the outbreak was different from that of the reference strains RRL-1 and RRL-2. The housekeeping genes of the ciprofloxacin-resistant strain (Ir-I 442) showed no alteration or mutation, and they were identical to the ciprofloxacin-sensitive strain (Ap-II 420). Neisseria MLST analysis with the MLST database showed that these isolates were similar to the outbreak strains from Dhaka, Bangladesh (2002), and Nigeria (2003) (10). In addition to the endemicity in Delhi, the migration of persons or visitors from other countries may have contributed to the spread of the serogroup A outbreak.

The antimicrobial drug susceptibility of the clinical isolates and further sequencing of the QRDRs of gyrase A of the strains confirms the emergence of ciprofloxacin resistance in the outbreak in Delhi. In addition to chemoprophylaxis, fluoroquinolone consumption in the community, for a range of infections may be, in part, responsible for the emergence of ciprofloxacin resistance in N. meningitidis isolates. Lack of N. gonorrhoeae isolate response to ciprofloxacin has been reported in Delhi (13). Drift in susceptibility of N. gonorrhoeae to ciprofloxacin caused therapeutic failure. Ciprofloxacin treatment failure in cases of typhoid fever has also been reported (14). To date, to our knowledge, no failure of ciprofloxacin as chemoprophylaxis for N. meningitidis has been reported. To predict clinical outcome, further detailed pharmacokinetic/pharmacodynamic (PK/PD) analysis is needed to determine the impact of the PK/PD parameters on resistance selectivity (15).

Dr Singhal is a senior research scientist at Ranbaxy Research Laboratories, Gurgaon, India, and coordinator of the microbial in vitro susceptibility testing program. Her major research interest is the emergence of bacterial resistance to existing antimicrobial agents.

We thank Pradip Kumar Bhatnagar and Kulvinder Singh Saini for critical review of this article and R. Madhubala for providing the laboratory facility for PFGE experiments. We appreciate the useful discussions regarding the epidemiology of meningococcal outbreaks with Shiv Lal, Sashi Khare, and R. Gaind.