We detected rotavirus G5P[6] with a long RNA pattern in a Vietnamese child with diarrhea. Viral outer capsid protein VP7 and VP4 genes suggest that it likely originated from porcine rotavirus either by genetic reassortment or as whole virions. To our knowledge, this is the first report of human rotavirus G5 in Asia.

The G and P types were determined by using reverse transcription–PCR (5) Samples that could not be typed were subjected to nucleotide sequencing. Amplification of the nonstructural protein NSP4 gene was conducted as described (6).

Rotavirus genomic RNAs were visualized by polyacrylamide gel electrophoresis (7) and staining with a Silver Stain II kit (Wako Pure Chemical Industries Ltd., Osaka, Japan) with a few modifications. The gel was incubated in staining solution for 45 min instead of 15 min, and in each washing step, the temperature of deionized water was maintained at 25°C.

VP7, the VP8* portion of outer capsid VP4, and NSP4 genes were sequenced by using the method previously described (5). Sequence similarity was searched with BLAST (www.ncbi.nlm.nih.gov/blast), multiple sequence alignment was conducted with ClustalW (www.ebi.ac.uk/clustalw), and phylogenetic trees were constructed by the neighbor-joining method using MEGA version 3.1 (8). Bootstrap analysis of 1,000 replicates was used to investigate branching of constructed trees. The N-glycosylation site of VP7 was predicted by using a NetNGlyc 1.0 Server (www.cbs.dtu.dk/services/NetNGlyc).

A total of 38 samples were obtained (31 from Khanh Hoa General Hospital and 7 from Ninh Hoa Hospital). G and P types were determined for 35 samples. G type could not be determined for 3 samples (KH142, KH228, and KH210). However, these samples were typed as G2, G4, and G5, respectively, by a homology search of VP7 gene sequence. Thirty-three samples were typed as G1P[8], 2 as G2P[4], 1 as G4P[6], 1 as G5P[6], and 1 as G9P[8]. Three different electropherotypes with a long pattern were identified in 20 electrophoretic-positive samples. Of these, 18 samples showed the same electropherotype and all were typed as G1P[8]. Each of the G4P[6] and G5P[6] rotaviruses showed different electropherotypes. The sample that contained G5 rotavirus was isolated from a 7-month-old girl admitted to Khanh Hoa General Hospital in 2004 with diarrhea, fever, and malnutrition.

Figure 1. A) Phylogenetic tree constructed from deduced amino acid sequences of the VP7 gene of animal and human G5 rotaviruses. Strain 4695G5, an equine G3 strain, was used as an outgroup. Bootstrap...

Phylogenetic analysis of the amino acid sequence of the VP7 gene (Figure 1A) of G5 strains showed 2 genetically distinct groups; KH210 clustered with a porcine G5 strain from Australia. This group also contained a human G5 strain from Cameroon. The human G5 strain from Brazil may belong to the other group. Similar to other G5 strains, VP7 of KH210 showed 1 potential N-glycosylation site at position 69. 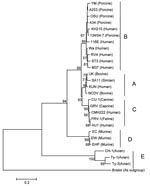 Figure 2. Phylogenetic tree constructed from the deduced amino acid sequences of the NSP4 gene of rotaviruses representing all genotypes. Strain Bristol, a group C rotavirus, was used as an outgroup. Bootstrap values...

Phylogenetic analysis of the amino acid sequence of NSP4 showed that KH210 was closely related to porcine rotaviruses and belonged to genotype B (Figure 2), with identity of 94% to 96% to porcine stains and 91% to 95% to human strains of genotype B. Similar to the structure of most rotaviruses, 2 potential N-glycosylation sites were located at aa positions 8 and 18 (8).

The human G5 rotavirus from Cameroon has a short RNA pattern. In contrast, the human G5 rotaviruses detected in Vietnam and Brazil have long RNA patterns. However, their VP7 genes are not in the same cluster in the phylogenetic tree. Brazilian G5 rotaviruses isolated from humans are usually found in combination with the P[8] genotype (10). This combination is a result of naturally occurring reassortment between human (P[8], Wa-like) and animal (G5, OSU-like) strains (14).

We have identified the combination of KH210 with genotype P[6]. This genotype is found predominantly in strains of porcine origin. VP8* of Vietnamese strains clustered with porcine strains isolated in Italy and belonged to the Ic lineage of P[6]. The NSP4 gene of KH210 belonged to genotype B and had high amino acid identities with both human and porcine rotaviruses of the same genotype. These findings are consistent with those of RNA-RNA hybridization (7) and sequence analysis (15). Human strain Wa and porcine strain OSU were shown to form 3 hybrid bands, including the one that corresponded to the NSP4 gene (7).

Rotaviruses from different species were shown by phylogenetic analysis to have similar NSP4 sequences that were clustered into the same NSP4 genotype. However, identifying the origin of the NSP4 gene in KH210 was not possible. On the basis of unique amino acid substitutions in VP7 and phylogenetic analysis of VP7 and VP8*, we believe that Vietnamese G5 strain most likely originated from porcine rotavirus by genetic reassortment or as whole virions. Although 2 strains with different G genotypes (G5 for KH210 and G4 for KH228) have identical VP8* genes (Figure 1B), which suggests a contemporary genetic reassortment event, it is not known whether sequence divergence between KH210 and porcine rotaviruses indicates interspecies transmission.

More information will be obtained from sequencing of contemporary porcine rotavirus strains in Vietnam. Identification of a human G5P[6] strain in Vietnam will provide a rationale for expanded surveillance to understand its prevalence in Vietnam and other Asian countries.

Dr Ahmed is an associate professor at the Institute of Scientific Research, Oita University, Oita, Japan. His primary research interests are molecular epidemiology and pathogenesis of infectious diseases.

This study was supported by the grant The Collaborative Study on Emerging and Re-emerging Infectious Diseases in Vietnam: Enhancement of Research Capacity, from the Ministry of Education, Culture, Sports, Science and Technology, Japan.