Novel Human Rhinoviruses and Exacerbation of Asthma in Children1

To determine links between human rhinoviruses (HRV) and asthma, we used data from a case–control study, March 2003–February 2004, among children with asthma. Molecular characterization identified several likely new HRVs and showed that association with asthma exacerbations was largely driven by HRV-A and a phylogenetically distinct clade of 8 strains, genogroup C.

Human rhinovirus (HRV) infection triggers asthma exacerbation (1), but there are no data on links between specific HRVs and asthma. Molecular sequence–based methods enabled recent identification of several novel HRVs (2–9) and have made it practical to look for genogroup and genotype-specific correlations with disease. In a previous study, we found a significantly higher prevalence of HRVs in children with asthma exacerbations than in children with well-controlled asthma (10). In this study, we used molecular characterization methods to examine HRVs from these patients with asthma.

The case–control study was conducted in metropolitan Atlanta, Georgia, USA, during March 2003–February 2004, among children with asthma who were >2 years of age (10). Case-patients were defined as patients with asthma exacerbation; controls were defined as patients with stable asthma. Information on symptoms of acute viral respiratory illness was also collected. The definitions, epidemiologic and laboratory methods, and clinical description of patients are available from Table 1 and the previously published report (10).

HRVs were detected in nasopharyngeal swab specimens by seminested reverse transcription–PCR (RT-PCR) targeting the 5′-noncoding region (NCR) (10). For further genetic characterization, HRV-positive samples were extracted from a previously unopened aliquot and amplified by using a nested RT-PCR that targeted the virus capsid protein 1 (VP1) gene at positions 2432–2781, based on HRV 1B (GenBank accession no. D00239) for species A and positions 2531–2799, based on HRV 14 (GenBank accession no. NC_001490) for species B. We used Sequencher 3.1.1 software (Gene Codes, Ann Arbor, MI, USA) for sequence assembly and editing. Nucleotide and predicted amino acid sequences were aligned with previously published HRV VP1 sequences (GenBank accession nos. AY355180–AY3552831, EF186077, EF077279, EF077280, EF582385–EF582387) by using ClustalW as implemented in BioEdit (version 7.0.5) (www.mbio.ncsu.edu/BioEdit/bioedit.html). 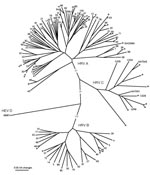 Of the 29 HRVs successfully genotyped, species A accounted for 18 (62%) strains, species B accounted for 3 (10%), whereas 8 (28%) strains formed a phylogenetically distinct clade, which we provisionally named “genogroup C” (Table 2, Figure). Of the 18 HRV-A strains, 17 showed close genetic relatedness (80.7%–93.8% nucleotide and 89.6%–98.8% predicted amino acid sequence identity) to HRV prototype strains. One HRV-A strain (GA23584) was highly divergent from the closest prototype, HRV80 (73.2% nucleotide and 73.0% amino acid sequence identity), which suggests that it could represent a distinct previously undescribed HRV. The 3 HRV-B strains were closely related to prototype strains (84.0%–88.6% nucleotide and 89.7%–93.4% predicted amino acid sequence identity).

The partial VP1 sequences of genogroup C strains were phylogenetically distinct from HRV species A and B and showed a substantial intragroup diversity (Figure). VP1 sequence identity of these viruses with the closest match within the same genogroup ranged from 68.4% to 74.6% for nucleotide and from 68.5% to 85.5% for amino acid sequences. These novel viruses were related to other recently described HRVs: HRV–QPM detected in specimens from Australia (4), C024–C026 detected in specimens from Hong Kong (6), and NAT001 and NAT045 detected in specimens from California (8) (Figure). Their identity scores compared with HRV–QPM were 66.0%–82.7% for nucleotide and 65.2%–86.9% for amino acid sequences. One of the strains (GA23592) was almost identical in partial VP1 sequence to C026 (Figure). The degree of genetic diversity among the genogroup C viruses far exceeded that between HRVs defined as distinct serotypes by classical serologic methods, which suggests that at least 7 of 8 of these viruses are antigenically distinct from each other rather than minor variants of the same serotype. The genogroup C HRV identity scores were substantially lower when compared with their closest matches from species A and B: 48.2%–51.1% for nucleotide and 38.5%–49.8% for amino acid sequences, and 35.9%–42.8% for nucleotide and 29.3%–35.8% for amino acid sequences, respectively.

In our study, the association of asthma exacerbations with HRV infection appeared to be largely driven by the novel genogroup C, which was found exclusively in case-patients, and species A. The association was statistically significant for species A (detected in 15 [23%] of 65 case-patients vs. 3 [4%] of 77 controls; OR 7.4; 95% CI 1.9–43.1; p<0.001) and for genogroup C (detected in 8 [12%] case-patients vs. 0 controls; OR undefined; p<0.010) but not for infrequently identified species B (detected in 1 [2%] case-patient vs. 2 [3%] controls, p>0.05) or for HRVs that could not be genotyped (15 [23%] cases vs. 9 [12%] controls; p>0.05). The distribution of HRVs between case-patients and controls still differed when the analysis was limited to the HRV-positive group (p = 0.05) or to genotyped HRVs only (p<0.05). The results of the only other study that reported novel HRVs in asthma patients (2 of which, NAT001 and NAT045, were related to genogroup C viruses in our study) are difficult to interpret because that study of adults with “cold” symptoms showed an unexpected lack of association of HRVs with asthma exacerbation (8).

Patients infected with genogroup C HRVs had lower forced expiratory volumes during the first second (FEV1) than did those infected with other HRVs (median 58.5% vs. 93%; p = 0.01), but the distribution of demographic and other clinical variables did not differ significantly between the 2 groups. Lower FEV1 with genogroup C infection than with other HRVs suggests a potentially greater severity of asthma exacerbation in patients infected with these HRVs. When one considers the great variation among HRV serotypes in levels of sensitivity to candidate antiviral compounds (12,13), genogroup-related differences in associated disease patterns have implications for clinical management of HRV infections in asthma patients and for development of antiviral drugs against HRVs. Preliminary data suggest that HRV-QPM and related HRV-C strains from Hong Kong share certain VP1 sequence characteristics with HRVs that are resistant to a candidate antipicornavirus drug, pleconaril (4,6,13). These data raise the possibility that these novel HRVs might also be resistant to this compound.

The HRV-positive specimens from which VP1 gene sequences could not be obtained derived predominantly from patients without symptoms of acute respiratory viral illness. The absence of symptoms in HRV-infected persons likely reflects subclinical, asymptomatic infection, which is common for HRVs (14), or HRV persistence after a recently resolved infection (15), both of which are likely associated with lower viral loads (as opposed to acute symptomatic infections), thus leading to lower detection rates in a VP1 assay that uses highly degenerate primers.

In conclusion, we found a striking genetic diversity of HRVs among children with asthma and confirmed the existence and wide geographic distribution (USA, Australia, Hong Kong) of HRVs distinct from both previously recognized HRV species, A and B. Our finding supports the role of the novel HRVs as human pathogens. Additional studies are needed to further explore clinical and public health implications of these findings.

Dr Khetsuriani is a medical epidemiologist at the National Center for Immunization and Respiratory Diseases, Centers for Disease Control and Prevention. Her research interests include diseases associated with picornaviruses, encephalitis, vaccine-preventable diseases, immunization programs, asthma, and allergies.

We thank Stephen Redd, Eric Hunter, Nick Raviele, and Joanne Costolnick for their contributions to the initial study, which enabled us to conduct this analysis.

This study was supported in part by the National Center for Environmental Health, Centers for Disease Control and Prevention, contract 200-1998-00103.

1Part of the information in this article was presented at the International Conference of the American Thoracic Society, May 16–21, 2008, Toronto, Ontario, Canada.

Novel Human Rhinoviruses and Exacerbation of Asthma in Children