We conducted a phylogenetic analysis of 19 hepatitis B virus strains from Laos that belonged to 2 subgenotypes of a new genotype I. This emerging new genotype likely developed outside Southeast Asia and is now found in mixed infections and in recombinations with local strains in a geographically confined region.

As a result of mutations and recombinations, hepatitis B virus (HBV) has evolved into 8 known genotypes (A–H), with a putative new genotype I recently found in Asia (1,2). Some genotypes have been associated with distinct clinical patterns, and their detection and identification are important for virus and disease surveillance.

In Laos, 8.7% of the population are chronically infected with HBV, and perinatal transmission is the most common route of infection. Here, we present the phylogenetic analysis of 19 related strains found in voluntary blood donors from Laos that cluster with the new genotype I. 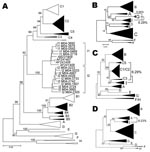 Figure 1. A) Phylogenetic comparison of all complete genotype I genomes (n = 15) obtained and compared to sequences of all known genotypes and subgenotypes. Non–genotype I genotypes identified in Lao People’s Democratic...

Phylogenetic analysis of sequences obtained from hepatitis B surface antigen–positive first-time blood donors from donation centers in Vientiane City and central provinces of Laos showed that 163 (42.2%) strains were of genotype B, and 204 (55.4%) were of genotype C. Subgenotypes included B2 (18), B3 (1), B4 (128), and B5 (16), as well as C2 (190), C3 (1), and C5 (13) (Figure 1, panel A). Nineteen strains, including 15 complete sequences, did not group with any of the known genotypes A–H. These sequences formed 2 clusters, which were emerging from a common node (bootstrap value of 100%; Figure 1, panel A). One of the clusters grouped with a recently reported single strain from Vietnam, for which we had previously defined a new genotype I (2). The 2 new groups from Laos will be referred to here as subgenotypes I1 and I2. Notably, all I1 strains were of serotype adw, whereas all I2 subgenotypes were of serotype ayw. With 1 exception, all genotype I strains were found in donors living in Vientiane City. Strains recovered from Hanoi, Vietnam, 8 years ago and reported as aberrant strains (3) also group with subgenotype I1.

Detailed analysis of full genome sequences showed that genotype C strains as a group were most closely related to genotype I (average Kimura distance of 7.89%, Table 1). The closest subgenotype was C3 with a 7.0% average Kimura distance (data not shown). The bootstrap value of the separating node was 92% (Figure 1, panel A), which is well above the bootstrap value of the G/DE node. On the S gene level, genotype I was most closely related to genotype G with a distance of 4.23% and a bootstrap value of 96% at the separating node (data not shown). Within the 2 subgenotypes I1 and I2, an average diversity over the complete genome of 1.19% and 0.94% was calculated; this difference increased to 2.33% when all strains were considered as a single group. The maximal genetic distance between 2 full-length genotype I strains was 4.3%. All clusterings were verified by maximum likelihood tree construction (data not shown). Thus, in accordance with published criteria (4), these values warrant the definition of a new genotype I with 2 subgenotypes I1 and I2.

Figure 2. Bootscan analysis of genotypes I, A, B, C, and G compared with genotypes A–H. Data points correspond to the center of sequence windows of 800 bp. For the analysis of the...

Most current genotypes of HBV seem to be the result of 1 or several recombination events (5). In particular, this is evident for the B/C recombinant, which has spread in mainland Asia (6) and has been defined as genotype Ba. Also genotypes B and C show some similarity with each other (Figure 2). Bootscan analysis (7) of all genotype I strains, including M04–3665, amplified by complete genome PCR, showed similarities with genotype C (nt 1400–3000), A (nt 3000–400), and G (nt 400–1400) by using a window size of 800 nt (Figure 2). Smaller bootscan windows tended to blur the relatedness. Phylogenetic reconstruction (Figure 1, panels B–D) and BLAST searches (http://blast.ncbi.nlm.nih.gov) (Table 2) of the above fragments of genotype I sequences confirmed the results of the bootscan analysis, which suggests that this genotype may also have evolved from a series of recombination events in a distant past.

The genotype C–like fragment was most closely related to subgenotype C3 (Table 2), thus far found only in the Pacific, except for a single incomplete strain in Laos (from this study). C1, found in Japan, South Korea, the People’s Republic of China, and Uzbekistan (8,9), is the second most closely related subgenotype. The genotype A–like fragment was most similar to subgenotypes A3 and A4, recently found by us and confirmed by others in sub-Saharan Africa (10–12). The apparent relatedness with the defective genotype G is even more surprising, since it has only been found sporadically in the United States, Japan, Germany, and France (13–15). Thus, none of the contributing genotypes or subgenotypes have ever been identified in Southeast Asia, which evokes questions about the origin of genotype I in this region.

Four strains with no signs of mixed infections in the sequence electropherograms clustered inconclusively in the phylogenetic analysis of partial sequences (data not shown). These strains were cloned and identified by bootscan analysis as recombinants between several genotypes and/or subgenotypes. In 3 recombinants, only subgenotypes I1 and I2 were involved (M04–3739, M04–2531, and M04–0309). The 2 latter recombinants had identical bootscan patterns (I1 between nt 1400–1900), while in the first recombinant, the I2 sequence was shifted downstream by 200 nt (data not shown). Strain C04–0790 showed a similar pattern to M04–3739, but the I1 sequence was replaced by a C2 sequence. Bootscan analysis of a previously reported strain (GenBank/EMBL/DDBJ no. AB231909) showed a B4/I1 recombinant with the I1 sequence identified between positions 600 and 1864. The most similar strains for each of the distinct regions of these recombinants are virtually all circulating in Laos (this study). In fact, the C2 sequence of the C04–0790 recombinant strain was identical to the C04–1257 strain found in a different district of Vientiane. This strain could have been a potential donor strain.

In a preliminary report, we discussed the need to assign a new genotype (I) to strains that we had found in Laos (1). More recently, Tran et al. defined a new genotype I on the basis of a single, similar strain from Vietnam (2). Here we analyzed a larger number of new sequences which formally comply with the definition of a new genotype (I) and 2 subgenotypes of it. A complex recombination pattern suggests that genotype I was formed by recombinations outside of Southeast Asia before spreading within Laos and Vietnam, and giving birth to a new genotype with subgenotypes, which later recombined with regional strains. Identification and analysis of genotype I strains provide further evidence of the importance of recombination in the evolution and genesis of new HBV genotypes, a complexity not fully acknowledged by the current genotype classification. Nucleotide sequences from this study have been submitted to international public databases under accession nos. FJ023546–48, FJ023553–60, FJ023566–68, FJ023572–73, FJ023577–630, FJ023642, FJ023659–83, FJ023700–07, FJ023854, FJ023878–85, FJ023936, FJ023968, FJ023994, and FJ358584–98.

Dr Olinger is a molecular biologist and virologist working in the Institute of Immunology of the National Health Laboratory in Luxembourg. He specializes in the detection and molecular epidemiology of viruses.

We are grateful to Lynn Grignard and Iris Andernach as well as Sébastien de Landtsheer, Emilie Charpentier, and Aurélie Sausy for their technical expertise and help in performing the experiments.