Orangutans Not Infected with Plasmodium vivax or P. cynomolgi, Indonesia

Parasites belonging to the genus Plasmodium cause malaria and are usually host specific. For example, humans are natural hosts for P. falciparum, P. vivax, P. malaria, and P. ovale, and orangutans are naturally infected with P. pitheci and P. silvaticum (1,2). However, simian malaria parasites can infect humans (1); for example, P. knowlesi, normally associated with infections in long-tailed and pig-tailed macaques, has recently been found to have caused malaria in humans in several countries in Southeast Asia (3–8). This finding raises the possibility that other zoonotic malaria parasites may emerge in humans.

Malaria parasites have distinct small subunit ribosomal RNA (SSU rRNA) genes that are developmentally regulated (9). Each Plasmodium species has at least 2 types of SSU rRNA genes, and the stage-specific expression of these genes varies among species. In general, the A-type genes are transcribed or expressed mainly during the asexual stages, and the S-type genes are transcribed mainly during the sporozoite stage. P. vivax also has O-type genes, which are expressed during ookinete and oocyst development. Phylogenetic analysis of the P. vivax and P. cynomolgi SSU rRNA genes has indicated that the genes appear to have evolved as a result of 2 gene duplication events (10). A more recent study, involving SSU rRNA sequence data from a much larger number of Plasmodium spp., demonstrated that gene duplication events giving rise to the A-type and S-type sequences took place independently at least 3 times during the evolution of Plasmodium spp. (11).

When taxonomic inferences of species within a genus are made from phylogenetic trees, trees must be reconstructed by using orthologous genes and must include as many species sequences as possible. However, Reid et al. used sequence data of only the S-type SSU rRNA genes for P. vivax, P. cynomolgi, and P. knowlesi and data of only the A-type genes for P. inui and P. fragile. Furthermore, they analyzed sequence data from only 4 simian malaria parasites. Nishimoto et al. recently included data from 10 simian malaria parasites (11). We therefore reanalyzed the SSU rRNA sequence data of malaria parasites of orangutans together with the A-type, S-type, and O-type SSUrRNA gene sequence data for various Plasmodium spp. 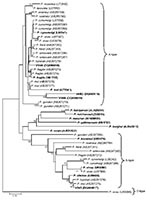 We used the neighbor-joining method, as described previously, to reconstruct the phylogenetic tree (3). Our phylogenetic analyses showed that SSU rRNA gene sequences VM88, VM82, and VM40 from orangutans (12) represent A-type SSU rRNA genes and that the VS63 sequence represents an S-type gene of Plasmodium spp. (Figure). No morphologic features of the malaria parasite stages in the blood were described for the Kalimantan orangutans by Reid et al. (12). Therefore, on the basis of SSU rRNA sequence data available for VM82 and VM88, whether these represent P. pitheci or P. silvaticum, previously described malaria parasites of orangutans, or some other species of Plasmodium cannot be determined with certainty.

The VS63 sequence is clearly not P. vivax, as previously reported by Reid et al. (12); it represents a Plasmodium sp. that is closely related to P. inui. It is most probably the S-type gene for either VM82 or VM88, which are A-type genes of P. pitheci and/or P. silvaticum. Furthermore, the VM40 sequence from orangutans represents a Plasmodium sp. closely related to the gibbon malaria parasite, P. hylobati (1), and is not the macaque malaria parasite, P. cynomolgi, as previously reported (12).

Phylogenetic analyses of the SSU rRNA genes indicate that none of the Plasmodium spp. isolated from orangutans in Kalimantan, Indonesia, are P. cynomolgi or P. vivax, as previously reported by Reid et al. (12). Before any conclusion about the identity of the malaria parasites infecting orangutans and their corresponding SSU rRNA gene sequences can be derived, a second or third gene of malaria parasites from these orangutans needs to be analyzed and the morphology of the corresponding blood stages needs to be described. Our study underscores the importance of using orthologous genes and sequence data from as many species as possible when inferring species within a genus from phylogenetic trees.

Prof Singh is director of the Malaria Research Centre, Universiti Malaysia Sarawak. His main research interests are centered on understanding the epidemiology of P. knowlesi and other primate malarias.

Mr Divis recently completed a Master of Science degree at Universiti Malaysia Sarawak, where he worked on the molecular characterization of malaria parasites in macaques. His research interests focus on the transmission of primate malarias.

This research was supported by grants from the Wellcome Trust, UK, and Universiti Malaysia Sarawak to B.S. and P.C.S.D.

Orangutans Not Infected with Plasmodium vivax or P. cynomolgi, Indonesia