We developed a specific and rapid detection system for Rickettsia japonica and R. heilongjiangensis, the causative agents of spotted fever, using a TaqMan minor groove binder probe for a particular open reading frame (ORF) identified by the R. japonica genome project. The target ORF was present only in R. japonica–related strains.

Rickettsia, a genus that includes the causative agents for spotted fever rickettsioses and typhus fever, comprises obligate intracellular bacteria (1). The first case of Japanese spotted fever (JSF), caused by R. japonica (2), was reported in 1984 in Japan (3). According to the national surveillance system in Japan (http://idsc.nih.go.jp/idwr/ybata/report-Ea.html), JSF cases, including sporadic cases resulting in death, have been gradually increasing. Rapid diagnosis of rickettsial infections is important because rickettsioses can be cured when appropriate antimicrobial drug treatment is given during the early clinical stages of the disease. Furthermore, development of a rapid and specific diagnostic system for R. japonica is now a matter of increasing urgency (4) because JSF has also been reported in several other countries in Asia (1).

Since 1998, thirteen complete Rickettsia genome sequences have been reported (www.ncbi.nlm.nih.gov/Genbank/index.html). In addition, the National Center for Biotechnology Information (NCBI) genome project for R. japonica strain YH has recently concluded (project ID 38487). Results of this project show specific DNA regions for R. japonica in the Rickettsia genome. One of these regions includes a 216-bp open reading frame (ORF) (GenBank accession no. AB437281). On the basis of information from this genome project, we performed DNA sequencing for this 216-bp ORF to determine whether the specific DNA sequences are conserved in all R. japonica strains and other closely related strains, including R. heilongjiangensis (5) and Rickettsia sp. LON (6). 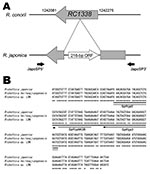 DNA sequencing was performed by using an ABI PRISM BigDye Terminator version 3.1 Kit (Applied Biosystems, Foster City, CA, USA) with an ABI 3130 sequence detector. DNA sequences were aligned by ClustalW software (http://clustalw.ddbj.nig.ac.jp/top-e.html) with an open gap penalty of 15, a gap extension penalty of 6.66, a gap distance of 8, and a maximum division penalty of 40. For determination of the DNA sequence for the 216-bp ORF, the primer pair of JapoSP5′ (5′-ACAACATCAATATTATAATTAGTATCC-3′) and JapoSP3′ (5′-TTCACGTATGTCTATATATGCTGCAGCG-3′) was used to amplify a 564-bp section, including this ORF, because this unique DNA sequence was located as the inserted sequence of the homolog for R. conorii RC1338 (Figure, panel A).

The nucleotide sequence of this ORF was identical among 5 of the R. japonica strains: DT-1, YH, FLA-1, HH-8, and HH-9 (100%); the sequence was highly conserved with significant identity in R. heilongjiangensis (99.5%), except for the Rickettsia sp. LON strains (92.1%; Figure, panel B). This 216-bp ORF had been previously applied to BLAST searches with NCBI blast (nblast) for humans, mice, and others (http://blast.ncbi.nlm.nih.gov/Blast.cgi). The results showed that no similar ORF had been reported to date. Therefore, we focused on this conserved region of the 216-bp ORF to develop a TaqMan minor groove binder (MGB) probe (Applied Biosystems) that could detect the pathogenic R. japonica group, including R. heilongjiangensis, with a high degree of specificity.

Real-time PCR was performed by using an ABI 7500 system (Applied Biosystems). DNA polymerase (perfect real-time PCR) for the PCR was obtained from Takara Bio (Kyoto, Japan). A 20-μL sample was added to each well of a 96-well microplate (Thermo Fisher Scientific Inc., Waltham, MA, USA) according to the manufacturer’s instructions. Thermal cycle protocol was performed as follows: first incubation stage, 20 s at 95°C; second stage, 5 s at 95°C and 34 s at 60°C. The second stage was repeated 45 times. For analysis of real-time PCR, the threshold line was fixed at 0.2 to avoid detection of nonspecific fluorescence. This detection procedure can be completed within 1 h.

The reactivity of this assay was examined by using various copy numbers of synthetic R. japonica DNA fragments that were amplified by the primer pairs JapoSP5′ and JapoSP3′ within the R. japonica genome. Genomic DNA of R. japonica strain YH was prepared from cultivated bacteria according to methods proposed by Furuya et al. (7). A calibration curve was generated with 5 calibrators, ranging from 102 to 109 copies/well in triplicate. We found a linear correlation (R>0.99) between the detection cycle numbers and R. japonica DNA copy numbers from 102 to 109 copies/reaction (data not shown).

A total of 26 rickettsial strains, classified into 11 species, were used in this study (Table 1). Specificities for this TaqMan PCR are also summarized in Table 1. Genomic DNA of R. prowazekii and R. rickettsii were prepared from antigen slides (Panbio Inc., Sinnamon Park, Queensland, Australia) by using a Gentra Puregene kit (QIAGEN, Valencia, CA, USA). Genomic DNA of other Rickettsia strains was also prepared from cultivated bacteria according to methods proposed by Furuya et al. (7).

Our results showed that this novel assay could detect all 5 R. japonica strains and 1 R. heilongjiangensis strain used in this study. However, it could not detect R. rickettsii, R. prowazekii, or other Rickettsia strains. These results indicate that the combination of probes and primers in this study had high specificity for the pathogenic R. japonica group. Nonspecific reactions were not observed when genomic DNA from human or murine fibroblasts was used in any of the assays (data not shown).

The detection limits of this PCR were compared to those of conventional PCRs by using serially diluted genomic DNA. The conventional PCRs, designated as Rj5-Rj10 and R1-R2 assays, were designed to detect the 17-kDa antigen gene of Rickettsia, by using a primer set of Rj5 (5′-CGCCATTCTACGTTACTACC-3′) and Rj10 (5′-ATTCTAAAAACCATATACTG-3′) (7) and R1 (5′-TCAATTCACAACTTGCCATT-3′) and R2 (5′-TTTACAAAATTCTAAAAACC-3′) (15), respectively. Since 1996, these assays have been used for molecular diagnosis of JSF in clinical laboratories in Japan. Recent studies have suggested that a TaqMan PCR assay may be as much as 100× more sensitive than these assays (data not shown). Therefore, in our study, the TaqMan PCR was assumed to be much more sensitive than the conventional assays that are known to show false-negative results, even for a patient with acute-stage JSF.

We requested clinical samples to verify the validity of our assay. Eighteen DNA templates were extracted from blood clots collected from 18 patients in the acute stages of illness (male:female ratio 1:1; average age 64.1 years [range 27–88 years); average number of days after onset of fever 4.6 [range 2–7 days; Table 2]). These templates were reexamined by using our TaqMan PCR. Although the conventional assays could not detect the presence of any Rickettsia DNA, 9 of 18 samples displayed positive results with the TaqMan PCR (Table 2). The blood clot from the patient in whom Scrub typhus disease was previously diagnosed was used as a negative control in this real-time PCR assay, resulted were not detected. Our TaqMan PCR is currently available to clinical laboratories that need to rule out false-negative results in molecular diagnoses.

JSF is a threat to public health in Japan. Our results suggest that an R. japonica–specific 216-bp ORF may have been conserved throughout the R. japonica species and closely related Rickettsia spp. The newly developed real-time PCR system, which demonstrated a high level of sensitivity and specificity, may be a useful tool for laboratory diagnosis.

Dr Hanaoka is a research resident in the Laboratory of Rickettsia and Chlamydia, Department of Virology I, National Institute of Infectious Diseases, Japan. His primary research interests are ecology, epidemiology, etiology, and development of diagnosis for zoonoses, especially vector-borne diseases.

We thank Fumihiko Mahara for providing clinical samples. We are also grateful to Mika Shigematsu and John M. Kobayashi for their suggestions and critical reading of the manuscript.

This work was supported by a Health Science research grant for research on emerging and reemerging infectious diseases from the Japan Health Sciences Foundation and a grant from the Emerging and Reemerging Infectious Diseases, Ministry of Health, Labor, and Welfare of Japan.