After our recent discovery of a Streptococcus pneumoniae 19A “superbug” (Legacy strain) that is resistant to all Food and Drug Administration–approved antimicrobial drugs for treatment of acute otitis media (AOM) in children, other S. pneumoniae isolates from children with AOM were characterized by multilocus sequence typing (MLST). Among 40 isolates studied, 16 (40%) were serotype 19A, and 9 (23%) were resistant to multiple antimicrobial drugs. Two others had unreported sequence types (STs) that expressed the 19A capsule, and 8 (88%) of the 9 multidrug-resistant strains were serotype 19A, including the Legacy strain with the new ST-2722. In genetic relatedness, ST-2722 belonged to a cluster of reported strains of S. pneumoniae in which all strains had 6 of the same alleles as ST-156. The multidrug-resistant strains related to ST-156 expressed different capsular serotypes: 9V, 14, 11A, 15C, and 19F.

The increasing global emergence and rapid spread of multidrug-resistant Streptococcus pneumoniae is a serious concern (1,2). Clonal dissemination of problematic pneumococcal strains have created clinically important treatment problems (3,4). Pneumococcal resistance to antimicrobial drugs was first reported in the mid-1960s (5,6). Since 1990, drug-resistant isolates of S. pneumoniae have spread rapidly throughout the United States (7). In the early 1990s, high-level resistance to penicillin and other antimicrobial drugs appeared in the United States with a low prevalence (8). Over the past decade, multidrug-resistant clones of S. pneumoniae have rapidly emerged (8–11). Of 90 serotypes, 19A is one of the most common types found in children. It can cause severe disease and easily develop antimicrobial drug resistance (9). The first 19A strain of S. pneumoniae with penicillin resistance was reported in the United States in 1986 (12). Introduction in 2000 of a pneumococcal 7-valent pneumococcal conjugate vaccine (PCV7) in the United States has substantially curtailed pneumococcal infections caused by 7 vaccine strains in children (13–15). However, nonvaccine strains, including drug-resistant strains, are increasingly being identified in patients. Among multidrug-resistant strains, a high proportion is serotype 19A, a strain not included in the vaccine; however, the proportion of invasive pneumococcal diseases caused by serotype 19A has substantially increased (8–11).

We recently discovered and reported a “superbug” strain of S. pneumoniae (Legacy strain) that is resistant to all Food and Drug Administration (FDA)–approved antimicrobial drugs and to 8 non-FDA–approved antimicrobial drugs used to treat acute otitis media (AOM) in children (11). Using molecular epidemiologic methods, particularly multilocus sequence typing (MLST), we characterized the molecular type of multidrug-resistant strains of S. pneumoniae recently isolated from children with AOM, compared the Legacy strain sequence type (ST) 2722 with 67 strains with the closest types in the MLST database, and reported the likely evolution and spread of the ancestor strains of the Legacy strain.

All pneumococcal bacteria were isolated from children seen at a private pediatric group in suburban Rochester, New York (Legacy Pediatrics). Isolates were obtained from middle ear fluid of children with AOM at 6–36 months of age during 2004–2006. The children received age-appropriate inoculations with PCV7 at 2, 4, 6, and 12–15 months of age. The University of Rochester Institutional Review Board approved the study, and written informed consent was obtained from parents or guardians for the study and for all tympanocentesis procedures. Serotypes of pneumococci were determined by latex agglutination (Pneumotest-Latex; Statens Serum Institute, Copenhagen, Denmark) according to the manufacturer's instructions and confirmed by Quelling reaction. The antimicrobial drug susceptibility of pneumococci was determined as described previously by E-test or microbroth dilution (11).

The sequences at each of the 7 loci were then compared with the sequences of all of the known alleles at those loci in the database at the pneumococcal MLST website (http://spneumoniae.mlst.net). The sequences identical to a known sequence were assigned the same allele number, and nonidentities to any known allele sequences were assigned new allele numbers. The allele at each of the 7 loci defines the allelic profile of each strain, as well as its ST. New allelic number or new ST number was assigned by a curator of the pneumococcal MLST database. The relatedness of isolates and known similar strains in the database was determined by constructing a neighbor-joining tree using a program online, Draw Tree Using Own MLST Data, found at the pneumococcal MLST website.

Among 40 S. pneumoniae isolates recovered from middle ear fluid of children with AOM, 16 (40%) were serotype 19A. Serotype 19A was the most common serotype isolated in the study during 2004–2006.

Antimicrobial drug susceptibility testing was performed on the serotype 19A isolates. Eight (50%) of the 16 isolates of 19A were highly penicillin resistant (MIC >2.0 µg/mL), and all 8 were also multidrug resistant. 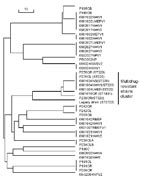 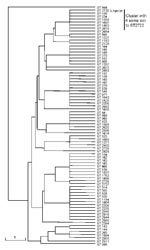 Figure 2. Genetic relatedness of Streptococcus pneumoniae ST-2722 (Legacy strain) to reported types that have 5 or 6 of the same loci as the Legacy strain. List of types available at the multilocus...

Figure 3. Variable sites (colors) in recP DNA sequences (allele) of ST-2722 (Legacy strain) and those in other Streptococcus pneumoniae that have the same 6 loci. List of types available at the multilocus...

We described the molecular and capsular types of pneumococci causing AOM in children tested in Rochester, New York, during 2004–2006. Serotype 19A, a relatively new molecular type, accounted for 40% of the isolates and has emerged as the major serotype causing ear infections in children. Eight different molecular STs expressed the 19A capsule; most of the strains were multidrug resistant. Among the 40 strains studied, 5% were new molecular STs. In addition, we analyzed the genetic relatedness of the strains to other previously described strains of serotype 19A. We traced the genetic origin of ST-2722 to a strain first identified in 1988 in Spain as ST-156, which expressed capsular serotype 9V (16). Over nearly 20 years before ST-2722 emerged, variants of this original ST-156 strain were identified in 18 countries, with 8 different STs and 13 different sequence/capsular type combinations (according to records in S. pneumoniae database).

ST-2722 (Legacy strain) appears to have resulted from a mutation identified in the recP gene that coincided with acquisition of multidrug resistance, including a ceftriaxone MIC of 6.0 µg/mL, and acquisition of capsular DNA associated with the 19A serotype. Because of genetic plasticity, different capsular genes of S. pneumoniae may transfer through DNA-mediated genetic recombination (17–19). The multidrug-resistant epidemic type 23F Spanish/USA clone has expressed capsular types 3, 9N, 14, and 19F. Capsular transformation may equip multidrug-resistant strains with highly virulent blood invasive phenotypes (18).

Many studies have documented the impact of the PCV7 on pneumococcal diseases. Introduction of PCV7 containing serotype 4, 6B, 9V, 14, 18C, 19F, and 23F has dramatically decreased the rate of carriage and disease caused by these vaccine serotypes. However, the proportion of invasive pneumococcal diseases caused by nonvaccine serotypes has increased substantially in recent years, and multiresistant strains have rapidly emerged (16,20–23). In addition, PCV7 offers moderate protection against AOM (24). The lowest level of protective activity provided by PCV7 was against serotype 19F, and 19F polysaccharide antigen provided less cross-protection for disease caused by related serotypes such as 19A (24,25). An increase in the rate of middle ear infections with 19A strains and other strains expressing capsular types not contained in PCV7 also has been reported (11). These developments encourage further ongoing epidemiologic surveillance. Emergence of new 19A strains may represent a successful vaccine escape mechanism used by PCV7-targeted clones, and antimicrobial drug nonsusceptibility provides an additional survival advantage that could help these organisms spread further.

By MLST analysis and capsular typing, we found that multiple STs expressing capsular type 19A have emerged as the most important otopathogens of children. We also found a new strain of S. pneumoniae (ST-2722), expressing a 19A capsule that is resistant to all FDA-approved antimicrobial drugs. ST-2722 has a genetic relatedness close to ST-156 reported to the S. pneumoniae MLST database from 18 countries. ST-2722 was multiresistant to antimicrobial drugs but had an MIC to ceftriaxone of 6.0 µg/mL. A study by Pelton et al. showed that multidrug-resistant 19A strains with ST-320 had an MIC to ceftriaxone of 8.0 µg/mL (10). The clinical importance of such strains is potentially high because empiric treatment of suspected and even proven pneumococcal infections typically relies on the efficacy of ceftriaxone.

Dr. Xu is an instructor of microbiology and immunology at University of Rochester Medical Center, Rochester, New York. His primary research interests include bacterial pathogenesis and vaccine development.

We gratefully acknowledge the staff of Legacy Pediatrics for providing S. pneumoniae isolates. We also express appreciation to Cynthia Bishop, the curator for the S. pneumoniae MLST database (http://spneumoniae.mlst.net).

This work was supported by the Thrasher Research Fund (Salt Lake City, UT, USA) award #02823-2 to M.E.P. and by an investigator-initiated research grant from Wyeth Pharmaceuticals (Collegeville, PA, USA) to M.E.P. Q.X. and M.Z. also were supported by the National Institute on Deafness and Other Communication Disorders research grant DC05845 to M.Z.