We assessed methicillin-resistant Staphylococcus aureus (MRSA) in persons on 49 swine farms in Belgium. Surveys showed that 48 (37.8%) persons carried MRSA ST398 and 1 (0.8%) had concurrent skin infection. Risk factors for carriage were MRSA carriage by pigs, regular contact with pigs and companion animals, and use of protective clothing.

Prevalence of methicillin-resistant Staphylococcus aureus (MRSA) carriage has been high (>10%) among swine and exposed farmers and veterinarians (1,2). These MRSA strains are genetically unrelated to hospital- or community-acquired clones. They are resistant to digestion with SmaI and belong to ST398 (1). We assessed prevalence and characteristics of MRSA carriage and infection and associated risk factors for swine farm residents and workers in Belgium during 2007.

We randomly selected 50 farms from the 7,500 farms in the pig farm national database of the Belgian Federal Agency for Food Safety. Sample size was based on an estimated 20% prevalence of MRSA colonization among farm workers and residents (1). The sample size was calculated to test the null hypothesis of prevalence <10% with a power of 80%. Participation was offered to all persons on the farm at the time of the visit, including farmers, co-workers, and household members. After giving written consent, participants were screened for MRSA carriage and interviewed. Simultaneously, on the same farms, a study of MRSA carriage in 30 randomly selected pigs per farm was conducted by veterinarians (3).

Univariate analysis showed MRSA carriage to be associated with being a farmer or farm co-worker, being male, having regular contact with animals (including goats, sheep, dogs, or cats) and, paradoxically, wearing gloves and apron and reporting occasional or regular hand disinfection with an antimicrobial product. Multivariate analysis showed MRSA carriage to be independently associated with MRSA prevalence among pigs at the farm, being a farmer with regular pig contact, reporting regular contact with dogs and horses, and reporting use of protective clothing (apron, gloves, or mask) (Table 1). 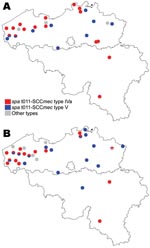 The 48 MRSA isolates were nontypeable by SmaI; some harbored SCCmec type IVa (n = 26), type V (n = 20), or were nontypeable (n = 2), and some exhibited 3 related spa types, t011 (n = 45), t034 (n = 2), and t567 (n = 1) (Table 2). Of the spa types, 4 representative strains belonged to ST398. Of the strains, 94% were classified into 2 genotypes, t011-SCCmec type IVa and t011-SCCmec type V, each found on 14 and 10 farms, respectively. In 8 of 11 farms with >2 MRSA carriers, all carriers harbored the same spa-SCCmec genotype. On 17 of 24 farms with MRSA colonization of humans and pigs, both groups carried the same genotype, suggesting animal-to-human transmission (Figure 1). Of MRSA isolates, 40 (83%) were resistant to tetracycline, cotrimoxazole, macrolides-lincosamides, aminoglycosides, and ciprofloxacin (Figure 2). Nearly all strains were susceptible to fusidic acid and mupirocin; all were susceptible to linezolid, rifampin, and glycopeptides. Resistance to aminoglycosides was conferred by the aac(6′)–aph(2′′) gene (n = 23) and the ant(4′) gene (n = 9). Resistance to macrolides-lincosamides was mainly mediated by ermC gene (n = 24). Tetracycline resistance was encoded by tetM and tetK genes in 48 (100%) and 23 (50%) isolates, respectively. Resistance profiles were related to clonal types (Table 2).

Human carriage of MRSA was associated with swine colonization with MRSA. Prevalence rate (38%) was higher than that for hospitalized patients or nursing home residents in Belgium (www.nsih.be/surv_mrsa/download_fr.asp). MRSA isolates from farmers belonged to closely related spa types corresponding to ST398, which are unrelated to hospital- and community-acquired strains but identical to strains from humans in contact with pigs in other European countries (1,2,10).

Despite the high prevalence of nasal MRSA, active MRSA skin infection was detected infrequently (<1%), within the range described in recent US-based studies (11). In a hospital in the Netherlands, a lower attack rate was found for MRSA ST398 than for other MRSA strains (12). However, invasive infections caused by MRSA ST398 have been reported, suggesting that this genotype is pathogenic for humans (2). In our study, MRSA strains did not harbor exotoxin.

Two MRSA genotypes were predominant. For 70% of farms with multiple MRSA carriers, all strains belonged to the same genotype, suggesting transmission within the farm. Although these strains have been shown to not spread easily in hospitals (12), outbreaks of MRSA ST398 in a residential care facility and a hospital probably originated from healthcare workers living on pig farms (13,14). In contrast with MRSA strains, MSSA isolates in our study showed diverse genotypes that frequently colonize human populations (4). MSSA isolates from 3 farmers belonged to the ST398 genotype, which is infrequently reported in humans except in pig farmers with contact with pigs (4).

Risk factors for MRSA ST398 carriage included regular contact with pigs but also with horses and dogs (10), suggesting that different animals could be MRSA ST398 reservoirs or vectors, at least on pig farms. Protective measures did not seem to reduce the risk of becoming colonized with MRSA; this lack of effectiveness has previously been observed for veterinarians (15). This apparent lack of protection should be further investigated to determine routes of transmission other than direct contact with pigs, including airborne transmission and contact with contaminated surfaces and companion animals.

Dr Denis is a clinical microbiologist in the Belgian National Reference Laboratory for MRSA, Université Libre de Bruxelles Hôpital Erasme. His primary research interest is the epidemiology of MRSA.

This study was supported by the Belgian Antibiotic Policy Coordination Committee, the Federal Public Health Service, and the Sanitary Fund against Porcine Diseases. The study protocol was based on the protocol of a similar survey by the Dutch Working Party on Surveillance and Research of MRSA, kindly provided by Edine Tiemersma and Jan Kluytmans.