Rotavirus group A G12 genotypes were detected in 3 (1.5%) of 198 stool samples positive for human rotavirus. G12P[6] was present in 2 samples, and a mixed G3G12P[8] was found in 1 sample. Phylogenetic analysis of complete open reading frames of all 11 genomic RNA segments proved their Wa-like genogroup affiliation.

Rotaviruses are worldwide enteric pathogens in humans and animals. Most prevalent human strains in Europe are group A rotaviruses with genotypes G1P[8], G2P[4], G3P[8], G4P[8], and G9P[8] (1,2). Oral live attenuated vaccines were licensed in 2006 in Germany after they were found to be efficient and safe. Monovalent Rotarix (GlaxoSmithKline Biologicals, Rixensart, Belgium) contains a G1P[8] strain, whereas RotaTeq (Merck and Co., West Point, PA, USA) contains 5 bovine-human reassortants representing genotypes G1–4 in association with P[5] and G6P[8] (3,4). To evaluate rotavirus vaccine efficacy and possible escape of genotypes from host immunity, post-marketing monitoring of circulating wildtype rotaviruses is necessary. That G12, which was detected 1987 in the Philippines, will be a predominant genotype in the future has been assumed. In recent years, a growing number of countries worldwide have reported the occurrence of G12, both sporadically and as a genotype of notable incidence (5).

A total of 2,752 stool specimens were collected in 2008 from inpatients with diarrhea at Leipzig University Hospital. The samples were derived from 1,804 patients, of whom 715 were <6 years of age. Several aliquots of a 10% stool suspension in phosphate-buffered saline were prepared from each specimen. One aliquot was screened on rotavirus group A antigen by IDEIA (Dako Ltd, Ely, UK). RNA of antigen-positive samples was extracted from a second aliquot by NucliSens easyMAG system (bioMérieux, Boxtel, the Netherlands). Rotavirus gene segments coding for structural viral proteins (VP) 1, VP2, and VP3 were amplified by reverse transcription–PCR with consensus primers (Metabion, Martinsried, Germany): VP1-F 5′-GGCTATTAAAGCTGTACAATG-3′ (nt 1–21), VP1-R 5′-GGTCACATCTAAGCACTC-3′ (nt3302–3285), VP2-F 5′-GGCTATTAAAGGCTCAAT-3′ (nt 1–18), VP2-R 5′-GGTCATATCTCCACAGTGG-3′ (nt 2717–2699), VP3-F 5′-GGCTATTAAAGCAATACTAG-3′ (nt 1–20), VP3-R 5′-GGTCACATCATGACTAGT-3′ (nt 2591–2574), and the other gene segments with primers described elsewhere (6–8). In the case of gene segments with short untranslated regions, primer ligation and reverse transcription steps were performed as described by Lambden et al. (9). Their primer 2 and gene-specific primers were used in subsequent PCRs to determine entire open reading frames.

Of samples from 1,804 patients, 198 (11%) were positive for rotavirus; of those with positive samples, 174 patients were <6 years of age. Genotyping showed G1P[8], G2P[4], G3P[8], G4P[8], G9P[8], G12P[6], G1G9P[8], and G3G12P[8]. G12 rotavirus strains were detected in 3 stool specimens. Strain GER126–08 was derived from the specimen of a 10-year-old boy who had been admitted to the hospital on April 14 because of a first manifestation of type 1 diabetes. After 1 week, he was transferred to our pediatric ward where diarrhea and vomiting developed 3 days later. Rotavirus genotypes of concurrently hospitalized children on the same ward were distinct. G12 strain GER172–08 was found in samples of 2 bottle-fed young infants who had gastroenteritis: a 15-day-old boy on July 31 and a 30-day-old girl on August 11. There was no direct contact between the 3 patients, and none of the patients or their close family members had any migration background or recent travel abroad. They also had not been previously vaccinated against rotavirus. 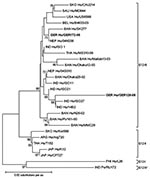 Figure 1. Phylogenetic dendrogram of viral protein 7 (VP7) of G12 rotavirus at the amino acid level. Bootstraps values (1,000 replicates) >65% are shown. The strain name is prefixed by the country of... 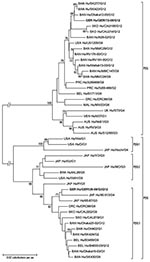 Figure 2. Phylogenetic dendrogram of viral protein 4 (VP4) P[6] and P[8] rotaviruses at the amino acid level. Bootstraps values (1,000 replicates) >65% are shown. The strain name is prefixed by the country...

Direct sequencing of gel-purified GER126-08 VP7 amplicons resulted in peak superpositions in sequencing gels; the sequencing of clones of this isolate showed a mixture of G3 and G12 genotypes. Contamination was excluded by a second RNA extraction and by comparing sequences to all G3 and G12 types detected in 2008, which were distinct. An amino acid alignment of VP7 G3 showed highest identity (97.5%) to G3 strains from Southeast Asia (data not shown). The G12 genotype belonged to G12-III lineage but was distinct from published full-length sequences, including the only European sequence from Belgium (Figure 1). Highest homology (97.8%) was shown in comparison to the Indian strain 14B2 (Appendix Table). Partial sequence data from European isolates showed no closer relationship, and G12 was not detected in 19 porcine rotaviruses from different piggeries of Saxony (data not shown). Amplification of VP1–4, VP6, and NSP1–5 by gene segment-specific consensus primers within conserved regions in the respective 5′ and 3′ ends was performed. No peak superposition occurred in sequencing of these amplicons, that is, only 1 variant of each genomic RNA segment could be detected. This finding indicates recent reassortment events. Although less likely, minor species of these 10 genomic RNA segments are not entirely excluded; they might have been missed in amplification or cloning and sequencing. The deduced amino acid sequences (Appendix Table) signified a Wa-like genogroup virus (G3G12-P[8]-I1-R1-C1-M1-A1-N1-T1-E1-H1) (11,12). Its VP4 genomic RNA segment was phylogenetically related to those of Japanese G3 and G4 genotypes (Figure 2) and distinct from all other P[8] genotypes of this collection (data not shown). The origin of the associated genomic RNA segments from either a G3 or a G12 type rotavirus remains unclear, due to the lack of substantial numbers of available full-length sequences.

Two distinct G12 rotaviruses with different P type associations were detected. The findings suggest that they were individually introduced into the local rotavirus diversity. Although GER172-08 is closely related to Southeast Asian strains, the origin of GER126-08 remains unclear. No conclusively related G12 sequence was published or detected in local piggeries.

A G3 VP7 sequence was found in addition in the stool sample GER126-08, however. Mixed infections are fairly common in crowded areas where population density is high and diverse rotavirus strains are co-circulating. They are required for reassortment, the major mechanism of rotavirus evolution (13,14). Pediatric wards match this setting during rotavirus seasons, because children with different rotavirus strains may be hospitalized simultaneously. Successive nosocomial rotavirus infections during hospitalization may facilitate asynchronous infections that favor reassortment (15). The case of the 10-year-old boy in this study fits into this pattern. Indications for recent reassortment events of strain GER126-08 have been detected consistently.

The detection of G12 rotavirus strains in Germany accentuates the need for extended multicenter studies to describe rotavirus diversity and control vaccine efficacy. Rotaviruses in animals should also be included to evaluate the origin of emerging genotypes.

Ms Pietsch is a scientific assistant at Leipzig University. She is currently pursuing research on the molecular epidemiology of virus infections.

Dr Liebert is head of the Department of Virology, Leipzig University. His research focuses on pathogenesis of virus infections and clinical virology.

We thank Bernd-Andreas Schwarz for providing the porcine rotavirus samples.