Despite longstanding vaccination programs, pertussis remains endemic to many industrialized countries, including Australia, Canada, Italy, Japan, the Netherlands, Switzerland, and the United States, all of which have reported recent increases in incidence (1). Although pertussis is classically a disease of infants and children, this increase has been mainly among adults and adolescents (2,3). Factors contributing to pertussis resurgence remain unclear, but possible causes are waning immunity, suboptimal vaccine coverage, improved surveillance and diagnosis, the switch from whole cell vaccine (WCV) to acellular vaccine (ACV), and adaptation of circulating Bordetella pertussis strains (4–9). To determine the global epidemiology of pertussis, we analyzed an international collection of B. pertussis isolates collected mainly over the past 40 years.

We used 8 variable-number tandem-repeats, including 6 from Schouls et al. (10), to develop a multiplex PCR multilocus variable-number tandem-repeats analysis (MLVA) assay (Table 1; Technical Appendix) and used it to characterize 316 B. pertussis isolates from 12 countries on 4 continents, including 208 isolates from Australia and 87 isolates representative of common pulsed field gel electrophoresis types from Canada, Japan, Finland, and the United States (complete list available from authors). The Simpson index of diversity (D) ranged from 0.02 to 0.73 per locus with a combined D of 0.911 (Table 2). The isolates were resolved into 66 MLVA types (MTs) (complete list available from authors). Thirty-five MTs were represented by single isolates, including 15 of 208 isolates from Australia and 10 of 49 isolates from Japan. Thirty-seven MTs were previously found in Europe (10,11) and 27 were novel. Fourteen MTs were found in >2 countries or regions.

We typed 5 genes, the products of which are used in ACVs (prn, ptxA, fim2, fim3, and fhaB), using the method of Chan et al. (12) to assess the effect of the switch from WCV to ACV on prevalence of the 4 predominant MTs (MT27, MT29, MT64, and MT70) in Australia. Isolates from these MTs have the same ptxA1 and fhaB1 alleles but vary in the other 3 genes investigated (complete list available from authors). The predominant ACV used in Australia is from GlaxoSmithKline (GSK) (Research Triangle Park, NC, USA), which contains pertussis toxoid, filamentous hemagglutinin, and pertactin but no fimbriae (FIMs). The strain used for GSK ACV contains the alleles prn1, ptxA2, and fhaB1 (10,13). However, ACV from Sanofi-Aventis (Pasteur, Lyon, France), which contains FIM2+3 in addition to pertussis toxoid, pertactin, and filamentous hemagglutinin with unknown allele types, is also licensed in Australia, complicating interpretation of variation in fim genes. On the basis of their frequencies and late appearance, fim2-2 and fim3-B are not likely to be the vaccine alleles. A significant increase (p<0.005) of prn2 (36% vs. 3%), fim2-2 (34% vs. 8%), and fim3-B (24% vs. 0%) was observed in the ACV period in comparison to the WCV period.

This increase of allelic frequency is better reflected in changes in antigenic profiles. MT27 has 3 profiles (prn1, fim2-1, fim3-A; prn2, fim2-1, fim3-A; and prn2, fim2-1, fim3-B). The first profile was seen once in the WCV period, whereas the other 2 first appeared in the WCV/ACV transition period and increased in frequency in the ACV period; the third profile, which differed by 2 alleles from the first, was more frequent. The appearance of prn2 in the second profile and additional change from fim3-A to fim3-B in the third represent increases in prevalence of alleles absent from ACV. MT29 also has 3 profiles ([prn1, prn2, or prn3], fim2-1, fim3-A), which differ in prn only. Most MT29 isolates carry prn3, and the profile is prevalent in both WCV and ACV periods, with no obvious increase in non-ACV alleles.

MT70 and MT64 both have uniform allelic profiles (prn1, fim2-2, fim3-A and prn1, fim2-1, fim3-A, respectively). However, MT70 (with fim2-2, not likely to be in ACV) increased significantly over the study period while MT64 with all alleles likely to be in ACV remained steady. Overall, the frequency of MT27 and MT70, with non-ACV alleles, increased significantly (p<0.0001) and correlated with the introduction of ACV, suggesting that antigenic changes could be driven by selection pressure.

The 2 MTs predominant in Australia were also prevalent in other countries and possibly have a global distribution. MT27 (18% of isolates) was found in 8 countries and MT29 (17% isolates) in 5. However, absence of an MT in a country might result from the small samples used. MT27 and MT29 were the most common types in the Netherlands (10) and the United Kingdom (11). MT10, MT64, MT70, MT84, and MT186 were also relatively common. MT10 and MT186 were found predominantly in Japan, although each had been found elsewhere, in China (1957) and Hong Kong (2002), respectively. MT64 was predominantly from Australia with 1 isolate from Japan, and MT70 was only found in Australia. However, all of these frequent MTs (except MT186) have been observed before. MT10 was frequent in the United Kingdom in the prepertussis vaccine era, while MT70 was common during 1998–2001 (11). 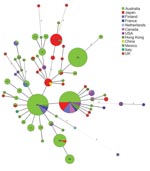 MLVA data were used to construct a minimum spanning tree (MST) (Figure 2). The 66 MTs were grouped into 2 clonal complexes and 9 singletons. Most MTs (54 of 66) belong to 1 clonal complex and 3 (MT186, MT187, and MT194) belong to another. Relationships between singletons with multiple allelic differences are not robust because they can be connected to other nodes equally. Thus, the MST cannot be rooted to infer the direction of change. Two internationally predominant MTs (27 and 29) are closely related with 1 allele difference. MT10, prevalent in Japan, is also closely related to MT29, with 1 allele difference. MT29, first isolated in the prevaccine era in the United Kingdom (11), has the highest number of SLVs and was found over 4 continents, which suggests that it arose early. Because MT10 and MT27 have a high frequency of SLVs, both likely emerged quite early. MT10 was isolated as early as 1957 in China and MT27 in 1950 in the Netherlands (10). Two high-frequency MTs (MT64 and MT70) were found in Australia only recently, with few SLVs, and may have contributed to the resurgence of pertussis in Australia.

Analysis of 208 isolates from Australia and representative isolates of common pulsed-field gel electrophoresis types from Canada, Japan, Finland, and the United States identified 6 predominant MTs (clones). Two (MT27 and MT29) were distributed worldwide, while 4 (MT10, MT64, MT70 and MT186) predominated in specific countries. Several MTs have persisted over long periods, including 3 that have circulated for at least half a century. Typing of genes encoding ACV antigens showed that use of ACV may have driven antigenic changes of 2 MTs now predominant in Australia.

Mr Kurniawan is a PhD student in medical microbiology at the University of New South Wales, Sydney, Australia. His research interests include molecular epidemiology and evolution of B. pertussis.