Porcine plasma and factor VIII preparations were screened for parvovirus 4 (PARV)–like viruses. Although the prevalence of PARV4-like viruses in plasma samples was relatively low, viruses appeared to be concentrated during manufacture of factor VIII. PARV4-like viruses from human and porcine origins coevolved likewise with their hosts.

In 2005, a previously unknown virus, parvovirus 4 (PARV4), was detected in a plasma sample from a hepatitis B–positive injection drug user (IDU) (1). Although PARV4 was subsequently detected in plasma from healthy donors, its prevalence is higher in samples from IDUs, AIDS patients, and hepatitis C virus–infected persons (2,3). In recent serologic studies, 67% of HIV-infected IDUs had antibodies to PARV4, whereas non-IDU controls were seronegative (4) This increased prevalence in IDUs and persons with hemophilia most likely reflects parenteral transmission of the virus (4,5). Furthermore, PARV4 was frequently detected in human coagulation factor concentrates prepared from older plasma samples (6). The lower detection frequency in current concentrates may be due to exclusion of high-risk batches, e.g., from IDU or hepatitis C virus–infected persons during plasma collection, and to improved purification methods. The presence of PARV4 in plasma suggests a viremic phase enabling spread of the virus to different organs. Even though recent studies by Kleinman et al. indicate that parvovirus B19 is not readily transmitted to susceptible hosts by blood component transfusion, similar evaluation of PARV4 transmission will be invaluable in assessing the need to routinely screen for this emerging virus (7).

PARV4 contains a 5-kb single-stranded DNA genome with inverted terminal repeats  and a large open reading frame (ORF) in each half of the genome coding for nonstructural protein (NS) and structural protein, respectively. PARV4-like viruses form a separate cluster among the parvoviruses (1,8). Three genotypes of human PARV4 parvoviruses with ≈93% nucleotide sequence identity have been described. The sequence of genotype 1 (PARV4-g1) is highly conserved, whereas that of genotype 2 (PARV4-g2 [formerly PARV5]) is somewhat more diverse. PARV4-g2 is found mostly in older coagulation factor concentrates (1960s–1980s), suggesting that genotype 1 emerged recently (6,8). A third genotype (PARV4-g3) was isolated from persons in sub-Saharan Africa (9). Additionally, PARV4-like viruses with a 60%–65% nucleotide identity were recently identified at high frequencies in porcine and bovine tissue samples in People’s Republic of China (10).

In this study, porcine plasma samples and factor VIII (FVIII) concentrates used by persons with hemophilia who have autoimmune antibodies against human FVIII were investigated for PARV4-like viruses. We then determined the degree of identity of these isolates with the human virus. 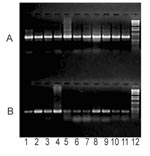 Figure 1. Parallel PCR amplification of PARV4-like (A) and PPV (B) by using purified DNA from clotting FVIII preparations. The results of this PCR usually suggested a higher PARV4 load despite the higher...

The genomes of these newly isolated PARV4-like viruses were similar to the PHoVs previously identified in Hong Kong Special Administrative Region, People’s Republic of China. Although, these new isolates showed some diversity (98%–99% identity), they differed somewhat more from the PHoVs (97%–98% identity). The viral protein (VP)-ORF was highly conserved (99%), whereas the NS-ORF showed more diversity (97%–98%). Genomic and protein-coding sequences were also compared with other PARV4-like viruses (Tables 1, 2). Phylogenic analysis using neighbor-joining and maximum parsimony methods demonstrated that PHoVs grouped together, whereas PARV4-like sequences from FVIII prepared at different times were less uniform (Figure 2). Older FVIII PARV4 contaminants (especially from 1994) were related more closely to the bovine hokoviruses (BHoVs) and to PARV4-g2. Finally, analysis of the newly identified virus genomes showed an alternative coding sequence inside of the VP gene with a recognizable relationship to small alternatively translated (SAT) proteins (13). In the porcine PARV4-like viruses, the start codon for the SAT protein was 3 nt downstream relative to the position of SAT-ATG in the human and bovine PARV4 viruses. Although the SAT protein was 67 aa in all the characterized human PARV4 viruses, porcine and bovine PARV-like viruses contained SAT proteins with 84 aa. The amino acid sequences of the SAT proteins were highly conserved in each PARV4 virus group; however, they differed greatly between PARV4 viruses belonging to different host species (Table 2).

Improved virus detection methods have facilitated the discovery of new viruses and have provided insight into the existence of a wide variety of potentially pathogenic strains in biopharmaceutical products. Plasma samples, collected from individual pigs in 2001–2002, and FVIII samples, prepared during 1994–2001, were tested for PARV4-like viruses.

Sequence analysis showed that PARV4-like viruses may have undergone some degree of selective pressure during this time because the genomes sequenced showed a greater variability than the porcine parvovirus NS sequences isolated from the same samples (J. Szelei and P. Tijssen, unpub. data). In the current study, comparison of the genomic and NS protein coding sequences indicated that viruses in the older samples were more closely related to BHoV and PARV4-g2 (Figure 2). Fewer changes were observed in the VP coding sequence (Table 2). Because VPs are responsible for the entry of parvoviruses, they usually adapt to host-specific receptor(s). The presence of PARV4-g2–like isolates in older samples and the omnipresence of PARV4-like viruses in more recent samples suggested that the porcine PARV4-like virus and human PARV4 may have similarly evolved (8). These new parvovirus isolates from Great Britain would belong to a different cluster of porcine PARV4-like viruses than the hokoviruses from Hong Kong Special Administrative Region.

Although older isolates shared more identity with BHoV and PARV4-g2, the substantial differences in the DNA sequences of PARV4-like viruses from different species (human, bovine, pig) suggested that they would have diverged a long time ago. This hypothesis was also supported by the sequence stabilization of the SAT proteins, which may play important host-specific roles in the viral exit (13). Nevertheless, the existence of a wide variety of different PARV4 strains, most of which result in chronic infections, could provide a basis for an evolutionary jump and recombination and should raise major concerns about the dangers of parenteral transmission.

This research was supported by a grant to P.T. from the Natural Sciences and Engineering Council of Canada.