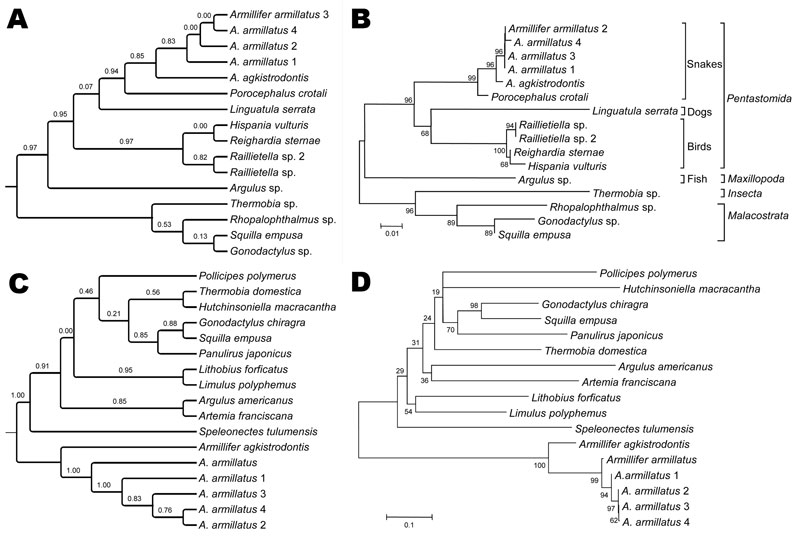 Figure 2. Molecular phylogeny of 4 Armillifer amillatus specimens based on partial 18S rRNA and partial cytochrome c oxidase (cox) gene sequences. Panels A and C show cladograms based on maximum-likelihood (ML); panels B and D show minimum-evolution (ME). In the cladograms, the approximate likelihood ratios are given next to the branches to indicate the statistical support for the respective branches. In panels B and D, the percentage of replicate trees in which the associated taxa clustered together in the bootstrap test (1,000 replicates) is shown next to the branches, and the evolutionary distances are given as scale bars as the number of base substitutions per site. The phylogram of the partial 18S rRNA sequences (B) depicts respective host species for the parasitic Pentastomida. The bird parasites Raillietiella sp., Reighardia sternae, and Hispania vulturis belong to the order Cephalobaenida, whereas snake parasites Armillifer spp. and Porocephalus spp. and dog parasites Linguatula spp. belong to the order Porocephalida. Note that not all species have entries for 18S rRNA and cox genes in GenBank. GenBank accession numbers of the species depicted can be found in the Table (Table). MUSCLE (www.ebi.ac.uk/Tools/muscle/index.html) and RevTrans 1.4 (www.cbs.dtu.dk/services/RevTrans/) were used for the alignment of partial 18S rDNA and cox sequences, respectively. Poorly aligned regions were removed with Gblocks. MODELTEST (darwin.uvigo.es/software/modeltest.html) was used for the selection of the substitution models. ML analyses of the 18S rDNA sequences were performed with PhyML 3.0 (http://atgc.lirmm.fr/phyml/) under the TN93 + I + Γ substitution model (6 rate classes and NNI algorithm for tree searching). ML analyses of the cox sequences were performed under the generalized time reversible + I + Γ substitution model. Approximate likelihood ratios were used to estimate the branch supports of the inferred ML phylogeny, which was visualized with TreeGraph2. MEGA4 (www.megasoftware.net) was used for ME analysis of the 18S rDNA sequences under the TN93 + I + Γ substitution model, and with maximum composite likelihood for cox sequences. The close neighbor interchange algorithm was used for tree searching, with pair-wise deletion of sequence gaps and considering differences in the substitution pattern among lineages.