Visceral pentastomiasis caused by Armillifer armillatus larvae was diagnosed in 2 dogs in The Gambia. Parasites were subjected to PCR; phylogenetic analysis confirmed relatedness with branchiurans/crustaceans. Our investigation highlights transmission of infective A. armillatus ova to dogs and, by serologic evidence, also to 1 human, demonstrating a public health concern.

Pentastomes are an unusual group of vermiform parasites that infect humans and animals. Phylogenetically, these parasites represent modified crustaceans probably related to maxillopoda/branchiurans (1). Most documented human infections are caused by members of the species Armillifer armillatus, which cause visceral pentastomiasis in West and Central Africa (2–4). An increasing number of infections are reported from these regions (5–7). Close contact with snake excretions, such as in python tribal totemism in Africa (5) and tropical snake farming (2), as well as consumption of undercooked contaminated snake meat (8), likely plays a major role in transmission of pentastome ova to humans. 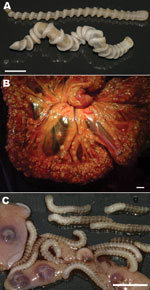 In May 2009, a 7-year-old female dog was admitted to a veterinary clinic in Bijilo, The Gambia, for elective ovariohysterectomy. The owner of the dog, a snake farm operator, reported late abortions during several pregnancies of the animal. The dog had been kept on the farm premises, where adult snakes (African rock pythons, Python sebae) had died several months before of infection with adult A. armillatus pentastomes (Figure 1, panel A). During the dog’s surgery, hundreds of pentastomid larvae were seen on the enteral serosa, bladder, uterus, and in the omentum (Figure 1, panels B, C). In April 2010, a male stray dog, 6 months of age, was admitted to the veterinary clinic for elective neutering. Coiled pentastomid larvae were found in the vaginal processes of the testes during surgery. Adult and larval parasite specimens were preserved in 100% ethanol for further parasitologic, histologic, and molecular examinations.

To investigate the extent of infection and determine whether transmission to humans on the snake farm grounds had occurred, we collected serum specimens from the 46-year-old male Caucasian snake farm owner, his 28-year-old wife, his 3 children, and the infected female dog. All human patients were asymptomatic, and informed consent was obtained. Serum samples were transferred to the Institute of Hygiene and Microbiology (University of Würzburg, Würzburg, Germany) for analysis by ELISA and Western blot based on larval parasite antigens.

DNA of the pentastome specimens (2 adults from the snakes, 1 larva from each dog) was extracted by using the QIAGEN Tissue Kit (QIAGEN, Hilden, Germany) and subjected to 18S rRNA and cytochrome c oxidase (cox) gene PCR with primers Pent629F (5′-CGGTTAAAAAGCTCGTAGTTGG-3′) and Pent629R (5′-GGCATCGTTTATGGTTAGAACTAGGG-3′ [9]) and primers Cox1-F (5′-CTGCGACAATGACTATTTTCAAC-3′) and Cox1-R (5′-ATATGGGAAGTTCTGAGTAGG-3′ [10]). After sequencing and BLAST (www.ncbi.nlm.nih.gov/blast) analysis of the partial 18S rRNA gene amplicons, the sequences showed high homology with A. agkistrodontis and Porocephalus crotali parasites. However, no A. armillatus 18S rRNA gene entry existed in GenBank; cox gene sequences showed high homology with A. armillatus, followed by A. agkistrodontis. The 4 amplified partial 18S rRNA gene sequences were 100% identical, as expected for the same species, but heterogenicity was seen in the cox sequences (99.7% identity). When phylogenetic trees were constructed, the nearest neighbor of A. armillatus was A. agkistrodontis in both models for both genes, followed by P. crotali and Linguatula serrata (18S rRNA only as no cox entry existed). All pentastomes analyzed clustered together and formed their own branch, with Argulus sp. being the nearest maxillopodan/branchiuran neighbor in both models by using 18S rRNA sequence data, and Speleonectes tulumensis (Remipedia) crustaceans when cox sequences were used (Figure 2). The 18S sequence of A. armillatus was submitted to GenBank (accession no. HM756289).

When tested by Western blot, the serum of the farm owner demonstrated a banding pattern similar to the L. serrata–positive control serum. Both serum samples exhibited 97-kDa and 37-kDa bands, and the serum from the patient with linguatuliasis had an additional 50-kDa band (not shown). All human serum samples were negative for various helminthic diseases. When dog serum samples were tested, only the sample from The Gambia showed a positive reaction in the ELISA, with an index of 1.0.

Pentastomiasis is a parasitic zoonosis with an increasing number of recognized human infections in West Africa. Our investigation highlights the local transmission of infective A. armillatus ova to dogs and, by serologic evidence, also to 1 human, and thus demonstrates a public health concern. Possibly because of their eating habits (e.g., consumption of dead snakes), dogs seem to be at high risk and could function as sentinel animals. In this study, we set up serologic assays for pentastomiasis based on raw larval A. armillatus antigens and screened the farm workers for past infection. The infection of 1 person, the snake farm owner, could be demonstrated by ELISA and Western blot for human serum samples. In 1982, an indirect immunofluorescence assay based on A. armillatus larvae was used for a survey in the Ivory Coast; results indicated a low seroprevalence (13).

In most human cases, pentastomiasis is asymptomatic and is an incidental finding during surgery or autopsy, and diagnosis largely relies on parasitologic and histopathologic examination (2,14,15). Recently, PCRs have been developed for canine pentastomiasis (9), but DNA sequences in the databases are limited to a few species of pentastomes only.

We have provided partial 18S rRNA gene sequences of A. armillatus pentastomes and used PCR for the diagnosis of pentastomiasis from a clinical sample (9). We also constructed phylogenetic trees for all pentastome species infecting humans and animals from which sequence data were available. Phylogenetic analysis showed that pentastomes formed their own branch in proximity to the Branchiura and Remipedia, a finding which is consistent with results of a previous study by others who investigated A. armillatus as a sole member of the pentastomes in comparison with pancrustaceans (1). The nearest phylogenetic relatives of A. armillatus are A. agkistrodontis and P. crotali, 2 species of the Porocephalida, followed by L. serrata and by the members of the Cephalobaenida (pentastomes that infect birds). The phylogenetic trees constructed here indicate a coevolution of the pentastomes and other maxillopodan/branchiuran parasites with their vertebrate hosts (birds, snakes, mammals, and fish).

We demonstrated that the serum of a patient with linguatuliasis markedly cross-reacted on the ELISA and Western blot based on Armillifer spp. antigens. To prevent further infections, personal hygiene measures were implemented, such as thorough hand cleansing after handling snakes and avoidance of contact with snake excretions. Public health institutions have been informed, and future studies will address the extent of seroprevalence in the local population.

Dr Tappe is a clinical microbiologist at the Institute of Hygiene and Microbiology, University of Würzburg, Germany, and a fellow in clinical tropical medicine, Medical Mission Hospital, Würzburg. His research interests focus on tissue-dwelling parasites and travel-related infections.

We thank Brigitte Heim and Cornelia Heeg for excellent assistance with the serologic assays.

This study was supported in part by the Robert Koch Institute, Federal Ministry of Health, Germany (fund 1369-378).