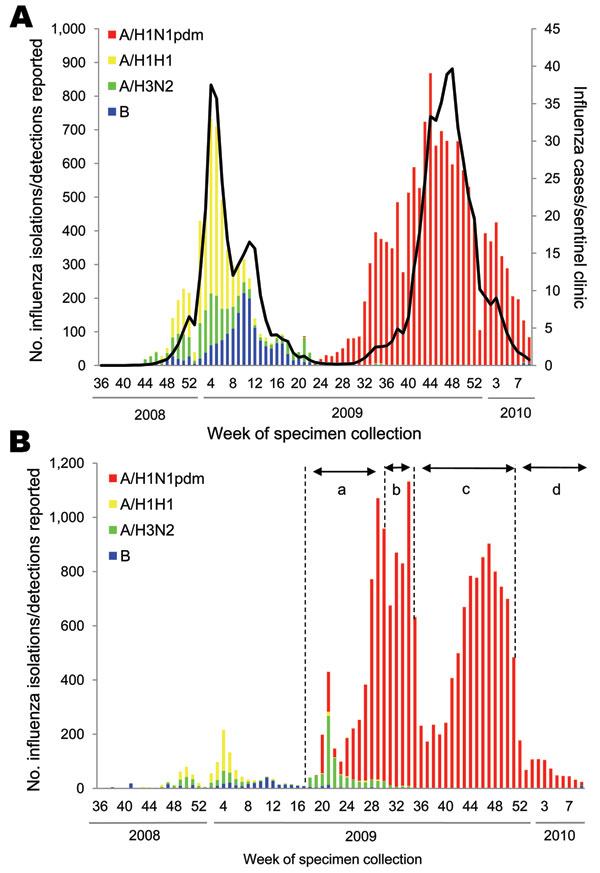 Figure 1. Weekly cases of influenza and isolation or detection of influenza viruses by influenza sentinel clinics (A) and nonsentinel clinics (B) from week 36 of 2008 to week 9 of 2010 in Japan (as of March 9, 2010). Pandemic (H1N1) 2009 (A/H1N1pdm) surveillance in Japan was divided into 4 stages depending on the prevalence situation, as shown in panel B: a) case-based surveillance (April 28–July 23), b) outbreak and hospitalization surveillance (July 24–August 24), c) hospitalization surveillance (August 25–December 20), and d) severe/fatal case surveillance (December 21 onwards). The sentinel clinics, consisting of 3,000 pediatric clinics and 2,000 internal medical clinics, collected samples randomly, while the nonsentinel clinics collected samples depending on the surveillance stage. Local public health laboratories randomly selected these samples for neuraminidase (NA) surveillance from both sentinel and nonsentinel clinics. In this study, 4,307 clinical specimens, comprising both original samples (n = 440) and isolates (n = 3,867), were subjected to full or partial NA sequencing for detection of the H275Y mutation. All oseltamivir-resistant (n = 61) and ≈10% of oseltamivir-susceptible pandemic (H1N1) 2009 (n = 421) isolates were then subjected to NA assay. The treatment history of the 4,307 cases consists of NA inhibitor–untreated (n = 1,088), oseltamivir use (n = 516), zanamivir use (n = 103), and unknown history (n = 2,600). Black line in panel A indicates weekly cases of influenza-like illness per influenza sentinel clinic.

1Members of the Influenza Virus Surveillance Group of Japan are listed at the end of this article.