As a result of human-to-pig transmission, pandemic influenza A (H1N1) 2009 virus was detected in pigs soon after it emerged in humans. In the United States, this transmission was quickly followed by multiple reassortment between the pandemic virus and endemic swine viruses. Nine reassortant viruses representing 7 genotypes were detected in commercial pig farms in the United States. Field observations suggested that the newly described reassortant viruses did not differ substantially from pandemic (H1N1) 2009 or endemic strains in their ability to cause disease. Comparable growth properties of reassortant and endemic viruses in vitro supported these observations; similarly, a representative reassortant virus replicated in ferrets to the same extent as did pandemic (H1N1) 2009 and endemic swine virus. These novel reassortant viruses highlight the increasing complexity of influenza viruses within pig populations and the frequency at which viral diversification occurs in this ecologically important viral reservoir.

Since its detection in humans in April 2009 (1), the pandemic influenza A (H1N1) 2009 virus spread quickly throughout the world. The pandemic virus was first detected in pigs in Canada in early May 2009 (2), and at least 14 countries have reported pigs infected with pandemic (H1N1) 2009 viruses (3), a few of which have been thoroughly described in the literature: in the Americas during summer 2009 (4,5); in Norway and Italy during fall 2009 (6,7); in India in May, June, and November 2009 (8); in Hong Kong Special Administrative Region, People’s Republic of China, during October 2009–January 2010 (9); and in South Korea and Thailand during December 2009 (10,11). All of these infections were caused by human-to-pig transmission.

We describe the isolation of 9 pandemic (H1N1) 2009/endemic swine reassortant influenza viruses representing 7 distinct genotypes in pigs in the United States. Our study highlights the effect of reverse zoonotic transmission of the pandemic virus on this population.

Samples used in this study were nasal swabs or lungs collected from pigs with clinical signs of respiratory disease, with the exception of A/swine/Indiana/240218/2010, which was isolated from a healthy pig within the framework of an active swine influenza surveillance program. In this program, nasal swab specimens had been randomly collected on a monthly basis since June 2009 from commercial farms in Iowa, Indiana, Minnesota, North Carolina, and Illinois. A/swine/Indiana/240218/2010 was 1 of 176 viruses detected. Vaccination status of the pigs was unknown. The specimens were transported in virus transport media at 4°C to the laboratory (Newport Laboratories, Worthington, MN, USA, or St. Jude Children’s Research Hospital, Memphis, TN, USA) for influenza screening. Samples were either tested within 48 h or frozen at −80°C before being processed.

RNA was extracted either with a MagMAX−96 AI/ND viral RNA isolation kit (Applied Biosystems/Ambion, Austin, TX, USA) on a Kingfisher Flex (Thermo Scientific, Rockford, IL, USA), or with QIAGEN viral RNA kit (QIAGEN, Valencia, CA, USA), following the manufacturers’ instructions. Real-time reverse transcription PCR (rRT-PCR) was performed to initially screen for all influenza A viruses (24). Positive samples were then screened specifically for swine H3 and H1 HA genes (25) and the pandemic (H1N1) 2009 M gene (24). One-step RT-PCR was performed by using the QIAGEN 1-step RT-PCR kit (QIAGEN), 600 nmol/L of each primer, 300 nmol/L of the probe, and 1.4 mmol/L MgCl2. The ABI Fast real-time PCR system 7500 thermocycler and corresponding software (Applied Biosystems, Foster City, CA, USA) were used with the following cycling conditions: 50°C for 30 min, 95°C for 15 min, followed by 40 cycles of 95°C for 10 sec, and 60°C for 30 sec. For the growth curves, viral titers were monitored by rRT-PCR by using the method described by Harmon et al. (26).

Swab samples were added to MDCK or swine testicle (ST) cells (American Type Culture Collection) as described (27,28). Virus isolates were identified by HA assay, as described in the World Health Organization manual on animal influenza diagnosis and surveillance (28). Specimens were plaque purified 2× on either MDCK or ST cells. Isolates were then characterized by full genome sequencing. Virus growth characteristics were compared on ST cells. Approximately 1.0 50% tissue culture infectious dose per milliliter of each virus was added to a confluent monolayer of ST cells. An aliquot was immediately removed after inoculation and every 24 hours through 4 days postinoculation. Samples were analyzed by using rRT-PCR that targeted the M gene and by titration on ST cells by using the method of Spearman-Karber.

Specimens were sequenced by using an Illumina Genome Analyzer (Illumina, Inc., San Diego, CA, USA). An RT-PCR was performed on RNA templates by using Uni-12 and Uni-13 primers to amplify all 8 segments in 1 reaction with Invitrogen SuperScript III One-Step Reverse Transcriptase and Platinum Taq HiFi (Invitrogen, Carlsbad, CA, USA). Polymerase gene primers were added to optimize the sequencing reaction (29). The obtained double-stranded DNA was sonicated in a Covaris AFA (Covaris, Woburn, MA, USA) until a broad peak at 200 bp appeared. The 3′ overhangs were removed from the sheared DNA by end repair, a Poly-A tail was added, and adapters were then ligated to the DNA fragments by using New England Biolabs (NEB) kits E6050L, E6053L, and E6056L (NEB, Ipswich, MA, USA). The ligation products were purified by gel electrophoresis by using E-Gel SizeSelect 2% agarose precast gels (Invitrogen). Index sequences were added to the DNA samples by Phusion DNA polymerase (NEB) before they were loaded on the illumina sequencer.

For sequence analyses, samples were de-multiplexed and each genome was assembled by using CLC Genomics Workbench software (CLC bio, Germantown, MD, USA) by running a high stringency de novo assembly. Sequences were compared by using BioEdit (30) and ClustalW (31). Phylogenetic analyses were performed by using MEGA version 4.0.2 (32). The sequences of the 9 influenza viruses we studied were submitted to GenBank under accession nos. CY086877–CY086942.

Assessment of Virus Pathogenicity in Ferrets

Eight of the 9 reassortant viruses were successfully isolated on either MDCK or ST cells. Sw/MN/340304/10 could not be isolated, most likely because of lack of initial material, because this specimen had the highest cycle threshold value by rRT-PCR targeting the M gene (cycle threshold value 36). Isolates were plaque-purified on MDCK or ST cells, and the genotypes were all confirmed. Taken together these data show that several novel genotypes of swine influenza viruses had been generated after the reverse zoonotic transmission of pandemic (H1N1) 2009 virus to pigs. 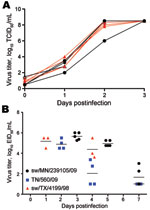 Figure 3. Replication of North American reassortant and endemic swine influenza viruses on swine testicle (ST) cells and in ferrets. A) The growth of 6 endemic swine viruses and 3 reassortant viruses (sw/MN/239105/09,...

To understand whether the increased genetic diversity created through the reassortment was associated with an increase in phenotypic diversity, select reassortants were assessed for growth in vitro and in ferrets. The growth characteristics of 6 endemic viruses from 2009–2010 and 3 pandemic reassortant viruses (sw/MN/239105/09, sw/MN/239106/10, and sw/NC/239108/10) were compared on ST cells. We found no difference in replication potential between any of these viruses, which suggests that no selective growth advantages had occurred through reassortment (Figure 3, panel A).

Because of the recent zoonotic transmissions of triple reassortant swine influenza (H3N2) viruses in the United States during 2010 (36), we also sought to determine whether reassortment had the potential to lead to a more pathogenic virus than previously circulating swine influenza strains. We used the ferret model to assess this possibility. Each of 5 ferrets was inoculated with 106 EID50 of sw/MN/239105/09 (H3N2). This reassortant virus caused only mild clinical signs (relative inactivity index ≈0.1) without marked weight changes or body temperature elevation (maximum of 3% weight loss, and 0.4°C increase in temperature; data not shown). The virus replicated to similar titers, as did the pandemic (H1N1) 2009 virus, TN/560/09, and the triple reassortant swine subtype H3N2 virus, sw/TX/4199/98, with a peak titer of infection of 5–6 log10 of virus and with viral clearance occurring ≈1 week postinfection (Figure 3, panel B). The similar disease and growth property of these viruses in ferrets again suggested that no unusual biologic properties had been inherited upon reassortment.

During 1998–2009, reassortment of influenza viruses in US pigs occurred relatively frequently (37). The genotypes of the viruses generated through these reassortments typically contained different swine or human influenza virus HA and NA genes in combination with the TRIG cassette (13–20). These reassortant viruses provided 6 of the 8 gene segments to the pandemic (H1N1) 2009 virus (38). Thus, and as indicated by similar events in other geographic locations, it was not unexpected that reassortment between pandemic (H1N1) 2009 and endemic swine influenza viruses would occur in US pigs after identification of the former virus in this population.

Somewhat unpredicted, however, was the number of reassortants that we identified in this study; 7 distinct viral genotypes were characterized. Although different genotypes were detected, each had an M gene of pandemic (H1N1) 2009 origin, a novel gene segment introduced into this animal population after human-to-pig transmission of the pandemic strain. The TRIG cassette in the reassortant viruses, a cassette that had remained relatively unchanged since 1998, was disrupted to include not only the M gene segment but also variably the NS, NP, and PA genes of pandemic (H1N1) 2009 virus. Because the pandemic virus contains M and NA gene segments from Eurasian-lineage swine influenza viruses and PB2, PB1, PA, NP, and NS gene segments from TRIG viruses, it is not surprising that several pandemic (H1N1) 2009 genes could be introduced into endemic US swine influenza viruses without altering the viability of the progeny viruses.

The inclusion of the pandemic (H1N1) 2009 M gene in the reassortants suggests a selective advantage to viruses containing it, although we were unable to measure any phenotypic differences in these viruses in our in vitro and in vivo assays. One phenotype that we did not measure was transmission, and it is tempting to speculate that the pandemic (H1N1) 2009 M gene segment could play a role here, both in terms of its selection in the reassortants described and in the human pandemic virus itself. Further studies are required to test this hypothesis.

The effect of these reassortants on the US pig industry is somewhat difficult to predict, although on the basis of the data generated here it is not likely to be great in terms of animal health. Antigenically, the reassortant influenza viruses carried HA genes already within the population (either endemic or pandemic (H1N1) 2009 viruses), and we were unable to detect any replication differences or unusual clinical signs in the field. Thus, and because HA-specific immunity is the target of current vaccines, the generation of these viruses is not expected to have any adverse effect on vaccine efficacy levels or disease severity in the field unless further adaptive changes occur as a result of continued circulation of these viruses.

Although the reassortants invariably contained the pandemic virus M gene and, with the exception of 1 reassortant, endemic virus HA and NA genes, the fact that we only saw viruses of the exact same genotype in limited spatial and temporal space suggests that there is no single dominant reassortant yet. Indeed, it is possible that these reassortants are generated but quickly displaced by other influenza viruses. Nevertheless, the data presented here once again highlight the dynamic nature of influenza viruses in pig populations and the continued monitoring of viruses in US pigs at the level of full genome sequencing is absolutely required.

Dr Ducatez is a postdoctoral fellow at St. Jude Children’s Research Hospital in Memphis, Tennessee. Her research interests include studying the evolution of influenza virus strains at the animal-human interface.

This study was supported by the National Institute of Allergy and Infectious Diseases, National Institutes of Health, US Department of Health and Human Services, under contract no. HHSN266200700005C; and by the American Lebanese Syrian Associated Charities.