Francisella tularensis is the etiologic agent of tularemia and a highly virulent category A biothreat agent (1,2). The most widely distributed subspecies is F. tularensis subsp. holarctica, which is found throughout much of the Northern Hemisphere and is the only subspecies found in Europe (3). Despite its wide geographic distribution, F. tularensis subsp. holarctica contains low genetic diversity, which indicates recent emergence (4). A recent global phylogeographic analysis (5), and several subsequent analyses (6–9), assigned most isolates from Europe to 2 phylogenetic groups: B.FTNF002–00 and B.13 (includes multiple subclades descended from branch B.13 [5,6,8]; branch and subclade nomenclature from [5] has been shortened by removing Br and extra 0s from individual branch and subclade names). These groups appear to be geographically segregated: only isolates from B.FTNF002–00 have been reported from the western European countries of Spain, France, and Switzerland, whereas B.13 is the only or dominant type reported from the Czech Republic, Finland, Georgia, Russia, Slovakia, and Ukraine (5–9). We provide additional information about the geographic distribution of these 2 groups using existing phylogenetic signatures (5,8) to place 45 isolates from Austria, Germany, Hungary, Italy, and Romania (Table A1) into the existing global phylogeographic framework. 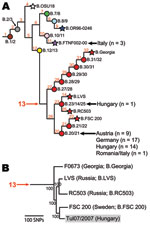 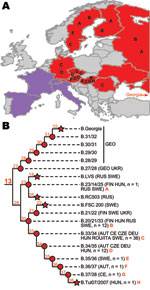 Figure 2. Detailed geographic distribution and phylogeny of Francisella tularensis subsp. holarctica subclades within group B.13. A) Countries from which groups B.13 and B.FTNF002–00 have been reported. Countries of origin for isolates assigned...

We identified new genomic signatures to provide increased genetic resolution within subclade B.20/21. Next-generation sequencing technology (Illumina Inc., San Diego, CA, USA) was used to sequence the genome of an isolate from Hungary (Tul07/2007, GenBank accession no. SRX025133) assigned to subclade B.20/21. Putative single nucleotide polymorphisms (SNPs) were identified in the resulting sequence and the genomes of 4 other strains previously assigned to group B.13 (LVS, AM233362.1; FSC 200, AASP00000000; RC503, SRX000104; Georgia F0673, SRX025885) by using an existing bioinformatics pipeline (5). The more distantly related strain OSU18 (CP000437.1) genome was also included as an outgroup. A maximum-parsimony tree was constructed by using the resulting ≈700 putative SNPs and PAUP 4.0b10 software (Sinauer Associates, Inc., Sunderland, MA, USA) (Figure 1, panel B). Most of the putative SNPs separated OSU18 from the B.13 strains (data not shown), but the remaining putative SNPs provided resolution among the B.13 strains, including 20 putative SNPs specific to the branch leading to the strain from Hungary (Figure 1, panel B). Consistent with previous analyses (Figure 1, panel A), the strain from Hungary clustered as a sister taxon to strain FSC 200 (Figure 1, panel B).

To show additional phylogenetic structure within subclade B.20/21, we designed genotyping assays targeting the 20 putative SNPs along the branch leading to the strain from Hungary (Figure 1, panel B) and screened them across 64 isolates assigned to subclade B.20/21. This analysis included the 41 isolates from Austria, Germany, Hungary, and Romania, as well as 23 additional isolates from central Europe, the Czech Republic, Finland, Russia, and Sweden that were previously assigned to this subclade (6,8) (Table A1). The assays were constructed and performed as described (5) by using an annealing temperature of 60°C. All 20 SNPs were laboratory confirmed, and 52 of the isolates were assigned to 6 new subclades (B.33/34, B.34/35, B.35/36, B.36/37, B.37/38, and B.Tul07/2007); the 12 other isolates remained in the basal subclade, now identified as B.20/21/33 (Figure 2, panel B; Table A1). Information about assays targeting canonical SNPs for the branches leading to the 6 new subclades are presented in the Table.

This study and previous studies have increased understanding of F. tularensis subsp. holarctica in Europe by placing isolates from multiple countries into the existing global phylogeographic framework. As a result, the genetic background is becoming defined for each country (i.e., the specific subtypes reported from each country). This information can be useful for identifying intentional (e.g., bioterrorism) or unintentional movement of F. tularensis subsp. holarctica between countries. For example, the isolate from Romania examined in this study was actually isolated in Italy from an infected hare that was shipped from Romania for hunting. Genotyping results are consistent with a Romanian origin for this isolate because it was assigned to the B.13 group that is widespread in central and eastern Europe (Figure 2, panel A) and not to the B.FTNF002–00 group, to which the isolates from Italy were assigned (Figure 1, panel A).

Understanding global phylogeographic patterns is possible only if isolates from multiple geographic locations are placed within the same framework (i.e., examined with the same genomic signatures). Because F. tularensis is genetically monomorphic and highly clonal, SNPs are preferred signatures for determining phylogenetic structure within this species (3). Vogler et al. (5) conducted the first SNP-based global phylogeographic analysis of F. tularensis. Subsequent studies (6–8) have used the SNP signatures described by Vogler et al. (5) and new SNPs discovered from new whole-genome sequences or multiple sequence typing data to further refine phylogeographic patterns within F. tularensis, particularly F. tularensis subsp. holarctica. These new signatures, when screened across diverse isolate collections, have identified new subclades within preexisting subclades. This pattern will continue as whole-genome sequencing becomes less expensive and more widely available. As a result, the nomenclature of phylogenetic groups within F. tularensis and the particular subclade to which a given isolate is assigned are constantly changing and will continue to change, which makes comparison of results and findings across different studies difficult. To address this problem, we have included all known F. tularensis subsp. holarctica SNP-based phylogenetic groups within our phylogenetic trees (Figure 1, panel A; Figure 2, panel B), including those discovered by other researchers. In addition, for the isolates analyzed in this study (Table A1), where applicable, we have listed the phylogenetic groups to which they were assigned in previous studies.

We thank Talima Pearson for helpful discussions and Megan Shuey for technical assistance with whole-genome sequencing.

This work was supported in part by the US Department of Homeland Security Science and Technology Directorate through awards HSHQDC-10-C-00139 and 2010-ST-108-000015.