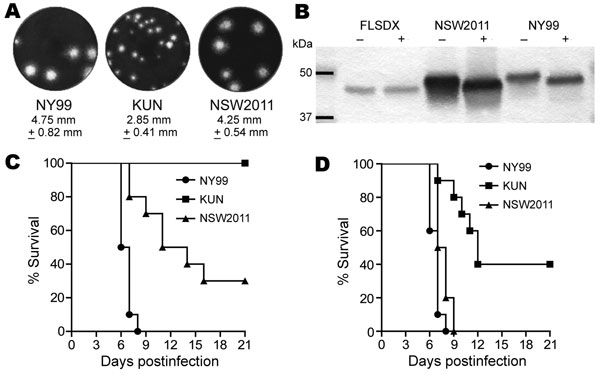 Figure 3. . . Studies of West Nile virus (WNV) properties in cell cultures and mice. A) Plaque morphology of WNVNY99, prototype WNVKUN, and WNVNSW2011 in Vero cells. Cells in 6-well plates were infected with specified virus and overlaid with 0.75% low melting point agarose in Dulbecco modified minimum essential medium (Life Technologies, Carlsbad, CA, USA) containing 2% fetal bovine serum. Four days after infection, the cells were fixed with 4% formaldehyde and stained with 0.2% crystal violet. B) Assessment of envelope (E) protein glycosylation of WNVNSW2011, WNVKUN and WNVNY99 by endoglycosidase digestion (PNGase F; Roche Diagnostics, Basel, Switzerland). Viral proteins in culture supernatant were digested by PNGase F (+) or undigested (−) and then resolved on sodium dodecyl sulfate–polyacrylamide gel electrophoresis. The migration rate of the E protein in each sample was determined by Western blot with E glycoprotein–specific monoclonal antibodies. C) Young adult (4 weeks old) or D) weanling (18–19 days old) Swiss outbred mice survival after intraperitoneal injection with 1,000 PFU (adult) or 10 PFU (weanling) of WNVNY99, WNVKUN, or WNVNSW2011. The mice were monitored for 21 days after injection for signs of encephalitis and then euthanized. The differences in virulence in weanling and adult mice between different pairs of viruses were all highly significant, as calculated by log rank Mantel-Cox algorithm with exact p values: for adult mice, WNVNY99 vs. WNVKUN p<0.0001, WNVNY99 vs. WNVNSW2011 p = 0.0001, and WNVKUN vs. WNVNSW2011 p = 0.0012; and for weanling mice, WNVNY99 vs. WNVKUN p<0.0001, WNVNY99 vs. WNVNSW2011 p =0.0004, and WNVKUN vs. WNVNSW2011 p = 0.0006. NY, New York; KUN, Kunjin; NSW, New South Wales.

1These authors contributed equally to the major technical aspects of this research.