Identified during the 1930s in Kenya, Rift Valley fever (RVF) is a zoonotic disease that circulates in many African countries and in the Arabian Peninsula (1,2). RVF virus (RVFV) epizootics are characterized by large sweeping abortion storms and substantial death rates in adult livestock (primarily sheep, goats, and cattle), with the death rate for newborn animals approaching 100% (3). Humans typically are infected by bites of infected mosquitoes or by percutaneous or aerosol exposure to contaminated fluids from infected animals. In most human cases, RVF is characterized by a self-limiting febrile illness (2–5 days), which progresses to more serious complications (hepatitis, encephalitis, blindness, or hemorrhagic syndrome) in only 1%–2% of infected persons (4,5). A large epizootic–epidemic occurred during 2006–2007 on the eastern African mainland, predominantly in Kenya (6) and Madagascar, during 2 successive rainy seasons (7).

In July 2007, a 12-year-old boy with a 2-month history of severe encephalitis was transferred from the Grande Comore, Union of the Comoros, to Mayotte (8,9). RVF infection was confirmed by IgM serologic analysis. Because of the proximity of Comoros and Mayotte, the RVF situation among humans in Mayotte was assessed. In serum samples from 7 humans with dengue-like syndromes, RVFV IgM or RVFV RNA was detected. We report the isolations and full sequence analysis of 2 RVF viral isolates from these serum specimens.

During January–April 2007, seven patients native to Mayotte were admitted to the hospital for severe dengue-like syndromes. Two patients were RVF seropositive by IgM and IgG, and the other 5 were positive by RVFV-specific reverse transcription PCR (RT-PCR) as detailed in Sissoko et al. (9). As described for other viruses, we used in-house IgM-capture enzyme immunoassays and in-house direct detection for IgG by using microplates coated with RVFV antigen and specific binding by using a peroxidase-labeled goat anti-human IgG conjugate (10).

We used 2 methods for phylogenetic reconstruction: maximum likelihood and the Bayesian inference. The best models of nucleotide substitution for each dataset were selected from the uncorrected and corrected Akaike Information Criterion, the Hannan and Quinn performance-based decision theory and Bayesian Information Criterion of Jmodeltest version 0.1 and TREEFINDER version October 2008 (Munich, Germany, distributed by its author at www.treefinder.de). The consensus substitution models proposed by the different software packages were selected for further analyses. Comparison of the maximum-likelihood method implemented by the TREEFINDER program with others was performed on the small, medium, and large segments by using the neighbor-joining and maximum parsimony methods from Mega5 software and the Bayesian approach by using MrBayes version 3.0B4 for phylogenetic reconstruction with random starting trees and run for 2,000,000 generations, sampling the Markov chains at intervals of 100 generations (12,13). Branch support values were obtained by using nonparametric bootstrapping with 1,000 resampling for PhyML and TREEFINDER and the posterior probabilities for the Bayesian approach estimated on 10,000 samples (sample frequency set to every 100th generation by using the Markov Chain Monte Carlo sampling). We compared topologies of the maximum-likelihood and Bayesian trees obtained for the different segments. 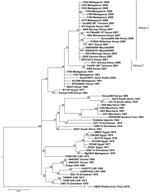 Because maximum-likelihood and Bayesian tree topologies obtained for the 3 segments were similar, only the small segment is presented. The Figure shows the Bayesian tree topology based on all RVFV small segments, with the HB29 phlebovirus from the People’s Republic of China as an outgroup. Tree topologies are consistent with those generated in previous work (7,11). The reliability of the phylogenetic trees was confirmed by performing bootstrap analysis. The Kenya 1 and Kenya 2 lineages clustered together with an overall bootstrap value of 92% but with sublineage bootstrap values of 56%–100%.

The work of Sissoko et al. (9) suggested the indigenous transmission of RVFV in humans in Mayotte. The geographic distribution of the 10 human serum samples found positive for RVFV in 2007 and 2008 was not spatially delimited. All case-patients were native to the island and resided in the following districts: Mamoudzou (3), Brandaboua (2), Dembeni (1), Sada (1), Chirongui (2), and Boueni (1). None reported travel into countries where RVF is endemic (9). The genomic analysis of the Mayotte isolates placed them within the 2006–2007 eastern African Kenya-1 lineage. RVF activity in Mayotte appears to be an expansion of the eastern African mainland 2007–2008 outbreak. It illustrates the risk for introduction in Mayotte or other Comorian islands of infectious agents involved in outbreaks in neighboring eastern African coastal countries, the major source being livestock importation from the African mainland or Madagascar.

Even if mosquito transmission might have occurred among some of the 7 reported RVF case-patients, contact with imported ruminants is the predominant means of exposure among these reported case-patients. However, further entomologic studies need to be conducted to identify all potential vector species in the island and animal surveys need to be conducted to help detect RVF at early stages to gain a better understanding of the ecologic and climatic factors that favor RVFV dissemination. These assessments will help in the development of appropriate control measures to better predict and respond to potential RVF outbreaks.

Mrs Cêtre-Sossah is a virologist at the Unit Control of Animal and Exotic Diseases at Centre de Coopération Internationale en Recherche Agronomique pour le Développement in Montpellier. Her research interests include the diagnosis and control of communicable and noncommunicable diseases, especially Rift Valley fever, and those caused by poxviruses and bluetongue viruses.

We thank Vincent Michaud for his steadfast support.