We amplified gene sequences from Anaplasma phagocytophilum, Borrelia garinii, B. valaisiana, B. turdi, Rickettsia monacensis, R. helvetica, R. sibirica sibirica, and Rickettsia spp. (including Candidatus Rickettsia vini) in ticks removed from birds in Spain. The findings support the role of passerine birds as possible dispersers of these tick-borne pathogens.

Hard ticks are a major vector of infectious diseases in industrialized countries. Several tick-borne bacterial diseases, such as Lyme disease, Mediterranean spotted fever, and tick-borne lymphadenopathy (also called Dermacentor-borne necrosis erythema and lymphadenopathy), are endemic to Spain. Furthermore, a few cases of human anaplasmosis and Rickettsia monacensis infection in humans have been diagnosed in Spain (1–3).

Birds are the preferred host for some tick species. As carriers of infected ticks, birds could be responsible for the spread of tick-borne bacteria that cause human anaplasmosis, Lyme disease, rickettsioses, and other diseases (4). Multiple studies support the conclusion or propose the hypothesis that birds play a role as reservoirs of Anaplasma phagocytophilum, Borrelia burgdorferi, and Rickettsia spp (4–6). Because the Iberian Peninsula plays a major role in the migratory routes of birds, we aimed to determine the presence and prevalence of A. phagocytophilum, B. burgdorferi sensu lato, and Rickettsia spp. in ticks removed from birds captured in northern Spain.

During April–October 2009, bird bandings were conducted in the protected area of Finca Ribavellosa in La Rioja, Spain (42°14′N, 2°54′W). Ticks were collected from birds and classified through taxonomic keys (7) and molecular methods (8). DNA was individually extracted by using 2 incubations of 20 minutes each with ammonium hydroxide (1 mL of 25% ammonia and 19 mL of Milli-Q water that had been autoclaved) at 100°C and 90°C.

DNA extracts were used as templates for PCRs targeting fragment genes for tick classification and for bacteria detection (Table 1). Two negative controls, 1 containing water instead of template DNA and the other with template DNA but without primers, and a positive control (a tick extract, A. phagocytophilum, B. burgdorferi sensu stricto, or R. slovaca) were included in all PCRs. Amplification products were sequenced, and nucleotide sequences were compared with those available in GenBank by using a BLAST search (www.ncbi.nlm.nih.gov/blast/Blast.cgi). Phylogenetic and molecular evolutionary analyses were conducted by using MEGA4 (16 in Technical Appendix). 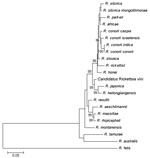 Figure. . . The phylogenetic position of Candidatus Rickettsia vini based on the ompA nucleotide sequences in a study of the role of birds in dispersal of etiologic agents of tick-borne zoonoses,...

A. phagocytophilum was detected only in 1 larva of an I. ricinus tick (0.5%). Twenty-nine (13.1%) samples tested positive for B. burgdorferi s.l. The most prevalent genospecies was B. garinii (n = 19), which was detected in I. ricinus (n = 16), H. punctata (n = 1), I. frontalis (n = 1), and Ixodes sp. (n = 1) ticks. B. valaisiana was amplified in 9 samples (8 I. ricinus and 1 Ixodes sp. ticks). B. turdi was found in 1 I. frontalis tick. Rickettsia infection was detected in 39 (17.6%) ticks. R. monacensis (n = 1), R. helvetica (n = 1), R. sibirica sibirica (n = 1), and Rickettsia spp. (n = 9) were detected in 12 I. ricinus ticks. Furthermore, according to gltA, ompA, and ompB sequence analysis, a possible new Rickettsia sp. was found in 25 I. arboricola ticks and 2 I. ricinus ticks. For these 27 samples, highest identities with R. heilongjiangensis (97.1%) and R. japonica (99.1%) were found for ompA (GenBank accession no. JF758828) and ompB (GenBank accession no. JF758826) nucleotide sequences, respectively, whereas gltA nucleotide sequences were identical to those from both Rickettsia spp. According to multilocus sequence typing (data not shown) and genetic criteria agreed on by experts, a Candidatus status could be assigned. We named it Candidatus Rickettsia vini (17 in Technical Appendix) (Table 2). The phylogenetic tree based on ompA gene shows the nearest relationships among Rickettsia spp. (Figure).

The presence of Anaplasma, Borrelia, and Rickettsia species in ticks removed from passerine birds corroborates the role of these vertebrates in the epidemiology and dispersion of tick-borne pathogens in Spain and in other zones of the planet. Some of the parasitized birds in our study, such as the European robin (Erithacus rubecula) or Eurasian blackcap (Sylvia atricapilla), are considered migratory or partial migratory birds. In addition, these species share an ecologic niche and ectoparasites (horizontal transmission) with other migratory birds that cover long distances from Africa to the Eurasian region.

Except for I. arboricola, the tick species captured in this study previously had been found on birds in Spain (18 in Technical Appendix). Nevertheless, I. arboricola ticks are commonly hosted by birds. The high prevalence of I. ricinus ticks was expected because it is the most frequent tick in this area, and the immature stages of this tick frequently parasitize birds.

Regarding Rickettsia species, R. monacensis and R. helvetica are among the human pathogens detected in our study. Both species have been identified in ticks from birds in Europe (19,20,23 in Technical Appendix). On the contrary, Candidatus Rickettsia vini, a potential new Rickettsia species, also detected in our study, has not been related to human disease (17 in Technical Appendix). Several genospecies closely related to R. heilongjiangensis and R. japonica have been identified in Ixodes spp. ticks removed from birds (23 in Technical Appendix). R. sibirica sibirica, responsible for Siberian tick typhus in western People’s Republic of China and in Siberia, was also amplified in an I. ricinus larva in this study.

Our data confirm the involvement of birds in the cycle of human tick-borne diseases. The findings confirm that birds can disperse vectors and microorganisms.

Dr Palomar has worked in the Center of Rickettsiosis and Arthropod-borne Diseases at the Infectious Diseases Area, Hospital San Pedro–Center for Biomedical Research of La Rioja since March 2009. Her research interests are the taxonomy of ticks and their associated pathogens.

We thank Agustín Estrada-Peña for classifying the I. arboricola ticks and Óscar Gutiérrez for providing tick samples.