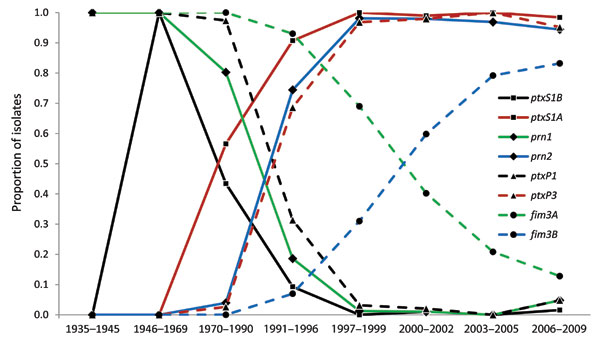 Figure 5. . . Transitions of frequency (by proportion of all isolates tested) of dominant alleles for each multilocus sequence typing (MLST) type target within the Bordetella pertussis population, United States, 1935–2009. The previous dominant type is denoted by a solid line, with the new dominant type denoted by a dashed line of the same style. The dashed lines of prn2 and ptxP3 overlap with each other and multilocus variable number tandem repeat analysis (MLVA) type 27 (Figure 6), which suggests they arose at approximately the same time and resulted in the new dominant MLVA + MLST profile. The transition from fim3A to fim3B occurred much later than the other transitions.

Page created: July 19, 2012
Page updated: July 19, 2012
Page reviewed: July 19, 2012
The conclusions, findings, and opinions expressed by authors contributing to this journal do not necessarily reflect the official position of the U.S. Department of Health and Human Services, the Public Health Service, the Centers for Disease Control and Prevention, or the authors' affiliated institutions. Use of trade names is for identification only and does not imply endorsement by any of the groups named above.