Bangladesh has reported a high number of outbreaks of highly pathogenic avian influenza (HPAI) (H5N1) in poultry. We identified a natural reassortant HPAI (H5N1) virus containing a H9N2-PB1 gene in poultry in Bangladesh. Our findings highlight the risks for prolonged co-circulation of avian influenza viruses and the need to monitor their evolution.

Bangladesh has one of the highest reported number of outbreaks of highly pathogenic avian influenza (HPAI) (H5N1) in poultry (1). As of May 26, 2013, a total of 548 outbreaks of HPAI (H5N1) have been reported (1); these outbreaks have resulted in serious economic repercussions in the poultry sector in this country. Furthermore, 7 cases of human infection with HPAI (H5N1) were confirmed, most recently a fatal case in a 2-year-old child in April 2013 (2).

In addition to the HPAI (H5N1) virus, the H9N2 subtype is widely circulating in poultry in Bangladesh, which raises concerns about the possible implications of the extensive co-circulation of these viruses (3,4). Their coexistence in the same susceptible population is likely to generate appropriate conditions for the emergence of novel reassortant variants, with unknown epizootic and zoonotic potential. We characterized the complete genome of 18 HPAI (H5N1) virus strains from Bangladesh and report the identification and characterization of a novel natural reassortant HPAI (H5N1) virus that contains an H9N2-PB1 gene in poultry.

A total of 18 tracheal and 1 cloacal samples were collected from chickens in 14 layer farms (15 samples) and 2 live-bird markets (4 samples) in 13 districts of Bangladesh during December 2011–April 2012. The samples were submitted by the Department of Livestock Services Dhaka to the World Organisation for Animal Health/United Nations Food and Agriculture Organization Reference laboratory for Avian Influenza in Italy for confirmatory diagnosis and genetic analysis. All samples tested positive for the H5N1 subtype by real-time reverse transcription PCR (rRT-PCR) (5) and virus isolation (http://www.oie.int/fileadmin/Home/eng/Health_standards/tahm/2.03.04_AI.pdf). Because the H7 subtype is also notifiable and the H9N2 subtype circulates in the poultry population in Bangladesh (3), samples were tested for these subtypes as well; results were negative. Epidemiologic information for these viruses is provided in the Table.

The complete genome of 18 HPAI (H5N1) isolates and the hemagglutinin (HA) gene of 1 virus (A/chicken/Bangladesh/12VIR-7140-9/2012) were successfully sequenced, as described (6). The nucleotide sequences obtained in this study have been submitted to GenBank (accession nos. KC616462–KC616606). Maximum-likelihood (ML) trees were estimated for all 8 gene segments (HA, neuraminidase [NA], nucleoprotein [NP], basic polymerase protein [PB] 1 and 2, polymerase [PA], matrix [M], and nonstructural [NS]) by using the best-fit general time reversible + I + Γ4 model of nucleotide substitution in PhyML (7). A bootstrap resampling process (1,000 replications) using the neighbor-joining method was used to assess the robustness of individual nodes of the phylogeny, incorporating the ML substitution model defined above. 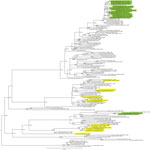 The pathogenicity of 3 subtype H5N1 viruses (the 2 H5N1/H9N2 7:1 reassortants and the H5N1 A/chicken/Bangladesh/12VIR-7140–12/2012 isolate) was determined by intravenous pathogenicity index in specific pathogen–free chickens. This value was 3.0 for all the viruses tested, confirming the isolates can be considered highly pathogenic, according to the World Organisation for Animal Health definition (www.oie.int/fileadmin/Home/eng/Health_standards/tahm/2.03.04_AI.pdf).

Although reassortment represents a major mechanism behind the emergence and evolution of the HPAI (H5N1) in Asia (11,12), data suggest that, in the past decade, these viruses have only sporadically provided the backbone for generation of novel intersubtype reassortants (8,9,13,14). This is surprising considering the prolonged and extensive co-circulation of subtype H5N1 and H9N2 viruses in poultry in Asia; it is unclear whether the limited evidence is because of insufficient surveillance or the low capacity of subtype H5N1 viruses to undergo intersubtype reassortment. We have documented the emergence and circulation of a novel natural H5N1/H9N2 7:1 reassortant strain in Bangladesh in 2012. This finding shows that the HPAI (H5N1) viruses circulating in this area are continuously evolving. Although it is difficult to ascertain where and when the reassortment event occurred, the identification of genetic clustering of the strains analyzed here with subtype H5N1 and H9N2 viruses identified in India confirms intense cross-border transmission between these regions, which has resulted in a favorable epidemiologic system for influenza viruses evolution (15).

The emergence of these natural H5N1/H9N2 reassortant influenza viruses suggests that co-infections with viruses of different subtypes have presumably occurred in poultry, most likely a result of the persistent co-circulation of these viruses along with poor biosecurity measures. This possibility underlines the importance of providing poultry farmers and small-holder poultry producers with educational programs about appropriate control measures for avian influenza. Furthermore, constant efforts must be undertaken to continue monitoring the evolution of influenza A(H5N1) viruses in Bangladesh and bordering countries to estimate the spread of this novel variant and to trace its origin and evolution. There is evidence that the polymerase subunits have a key role in virus replication efficiency and cross-species transmission; therefore, pathogenicity and transmission studies in poultry and mammal models are essential to evaluate the potential animal and public health threat posed by these novel H5N1/H9N2 reassortant influenza viruses.

We thank Marco De Nardi for his constructive comments and the Central Disease Investigation Laboratory, Department of Livestock Services, Ministry of Fisheries and Livestock of Bangladesh, for its cooperation.

The opinions expressed herein are those of the author(s) and do not necessarily reflect the views of the US Agency for International Development.