We report molecular evidence of Tula hantavirus as an etiologic agent of pulmonary-renal syndrome in an immunocompromised patient. Acute hantavirus infection was confirmed by using serologic and molecular methods. Sequencing revealed Tula virus genome RNA in the patient’s blood. This case shows that Tula virus can cause serious disease in humans.

The species Tulavirus was first described by Plyusnin et al. (1) in voles (Microtus arvalis and M. levis) caught in Tula, Russia, in 1987. The presence of TULV was also documented in other vole species in several European countries including Germany, Switzerland, Slovenia, Czech Republic, Slovakia, Austria, Poland, and Serbia (2). In Central Europe, M. arvalis is the main reservoir of TULV. The TULV antigen was found in 10% of the population of common voles in southern Moravia in the Czech Republic (3). The pathogenic potential of Tula virus in humans is considered to be low.

The causative agents of hemorrhagic fever with renal syndrome in Central Europe are Dobrava-Belgrade virus and PUUV (4). These viruses seem to circulate in geographic areas that overlap with the areas where TULV circulates. Despite the massive population of common voles in the Czech Republic and a high prevalence of TULV in its rodent reservoir, human TULV infection has not been reported.

A 14-year-old boy from a rural region in the northeast part of the Czech Republic (Opava region) has received treatment for acute lymphoblastic leukemia since July 2011. Because of the biologic properties of the malignity, the boy was classified into the high-risk group of the treatment protocol. The intensive part of the treatment was finished in August 2012, and the patient has continued maintenance therapy since then.

During his first week of maintenance therapy, the patient experienced a respiratory infection with temperatures of ≈38°C, mild dyspnea, and a cough. These symptoms spontaneously disappeared. One week later, the patient had temperatures up to 38.5°C. He reported a headache, lack of appetite, and vomiting but no cough or respiratory distress. Upon the patient’s admission to the hospital, at the end of September 2012, his conditions deteriorated. He was febrile at 39.3°C and moderately dehydrated. Dyspnea with desaturation developed, so he was transferred to the intensive care unit to receive oxygenotherapy. The antileukemic maintenance therapy therefore had to be interrupted. The x-ray and high-resolution computed tomographic scan revealed severe bilateral bronchopneumonia with a major fluidothorax and bilateral dystelectasis. He was then given amoxicillin/clavulanate, amikacin, and antimycotic drugs. Oliguria also developed, with a minimum of 0.3 mL/kg/h, and it was managed by diuretic medication. Hemodialysis was not needed. He had transiently increased blood pressure followed by hypotension.

During the course of the patient’s hospitalization, his clinical condition, computed tomographic scan, and chest radiographic findings, and laboratory parameters improved. His renal failure gradually subsided with a transient polyuric phase. After 3 weeks of hospitalization, the patient resumed maintenance antileukemic therapy, and he was discharged from the hospital in good condition.

Serum samples taken on days 11, 12, 20, and 39 were tested for IgG and IgM antibodies to hantaviruses by using ELISA (Anti-Hanta Virus Pool 1 “Eurasia”; Euroimmun, Lübeck, Germany). The serum sample taken on day 12 was further tested for IgG and IgM antibodies by using Immunoblot (Anti-Hanta Profile 1; Euroimmun). ELISA results are considered positive when the index value (optical density divided by the cutoff value) is >1.1. Serology results suggested that the causative agent was a hantavirus antigenically closer to PUUV (Table 1). 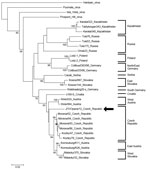 The EDTA plasma sample collected during the acute phase was positive for hantavirus RNA. Sequencing analysis of both L- and S-segments confirmed that the causative agent was TULV. The phylogenetic trees for partial L- and S-segments (Figures 1, 2) indicated that the identified Tula virus strain belongs to the lineage representing strains from middle Europe (Czech Republic, west Slovakia, Austria, and Slovenia). Partial L- and S-segment sequences of the TULV isolated RNA have been deposited in GenBank under accession numbers KC522413 and KC494908, respectively.

Although the presence of TULV in the common vole population in the Czech Republic has been documented, no evidence of its pathogenicity in humans has been shown. Specific antibodies against TULV have been identified in a healthy blood donor in the Czech Republic (8) and in German forestry workers (9), suggesting that TULV can be transmitted to humans. A case of a serologically detected symptomatic TULV infection that followed a rodent bite has been reported in Switzerland (10). However, because of the late occurrence of specific antibodies and because the symptoms were atypical for hantavirus infection, the evidence for the Tula virus as an etiologic agent in this case is questionable (11). Renal and pulmonary syndrome with biphasic course associated with TULV was documented in northern Germany. The diagnosis was made on the basis of the highest neutralizing titer against TULV and detection of TULV RNA in common voles in the region where the patient lived (12).

We provide the molecular evidence of human symptomatic TULV infection. The clinical symptoms included both renal and pulmonary involvement with dominating respiratory failure corresponding to the hantavirus pulmonary syndrome. The course of the disease was severe, and the delayed occurrence of TULV IgG was most likely caused by the patient’s immunodeficiency. The laboratory findings were typical for hantavirus infection, with strongly decreased platelet count but only moderately elevated serum creatinine and urea.

Furthermore, during the acute stage, viral RNA was detected in the patient’s serum, which strongly suggests that TULV is a causative agent of the critical stage. This case illustrates that TULV can cause life-threatening disease in an immunocompromised patient, although under normal circumstances it is a nonpathogenic virus (8).

Dr. Zelená is a head of the Department of Virology (Institute of Public Health Ostrava) and of the National Reference Laboratory for Arboviruses of the Czech Republic. Her main research interests include arboviruses and vector-borne viruses, imported and emerging viruses, and diagnostic electron microscopy.

1The authors contributed equally to this article.