We detected Bartonella quintana in 48.6% of captive rhesus macaques from an animal facility in Beijing, China. Prevalence of infection increased over the period of observation. Our findings suggest that macaques may serve as reservoir hosts for B. quintana and that Pedicinus obtusus lice might act as efficient vectors.

Bartonella quintana is a vector-transmitted, hemotropic, and extremely fastidious gram-negative bacterium. Infection with B. quintana has been recognized to cause a broad spectrum of disease, including trench fever, chronic bacteremia, endocarditis, and bacillary angiomatosis (1�?"4). Humans are the primary reservoir host for B. quintana, which, unlike most other Bartonella species, lacks an identified animal reservoir, although some recent reports have found B. quintana in dogs and in cynomolgus and rhesus macaques (5�?"7). Almost 60 years ago, rhesus macaques were able to be experimentally infected with B. quintana (8). However, nonhuman primates have not been shown to support long-term maintenance, multiplication, and transmission of this pathogen, all of which would be expected if these animals were to act as reservoir species. Observations of monkey ectoparasites transmitting B. quintana between nonhuman primates or infecting humans have also not been reported.

A laboratory animal surveillance program intended to screen for the presence of adventitious pathogens was performed at the Laboratory Animal Center of the Academy of Military Medical Sciences, Beijing, China. Four blood samples from 10 captive-bred rhesus macaques (Macaca mulatta) were presumed to be infected with Bartonella spp. according to Giemsa-stained smears and transmission electron microscopy (Technical Appendix Figure 1). Further PCR and sequence analysis of 3 gene targets (internal transcribed spacer [ITS], gltA, and rnpB) confirmed the existence of B. quintana in the 4 parasite-positive macaques (Technical Appendix Table 1). In addition, B. quintana was successfully isolated from the 4 monkeys by blood plating.

During the 36-day period of observation, 3 screening tests of the 10 macaques showed an increasing prevalence of B. quintana: 4 were found positive at day 1, 7 positive at day 15, and all 10 positive at day 35 (Figure 1, panel A). Close examination of the monkeys revealed no skin scratch or wound indicative of direct contact between them. 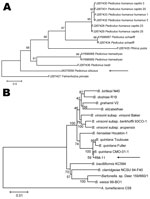 Examination for ectoparasites at the last day of observation (day 36) revealed that all 10 monkeys were infested with lice (mean 10.3 lice/monkey, range 4�?"28 lice). Lice from each infested monkey were combined in 2 pools. B. quintana was identified in all pools of lice by PCR selective for ITS, gltA, and rnpB. Partial Cytb sequence (660-bp) of the louse was obtained (GenBank accession no. JX070558) (Technical Appendix Table 1); phylogenetic analysis of Cytb identified the louse as a relative of lice of the genus Pedicinus (Figure 2, panel A). By means of stereomicroscopy, the louse was then identified as Pedicinus obtusus (Figure 1, panel B), a macaque-specific ectoparasite, according to morphologic criteria (9,10).

Nucleotide sequences of ITS (123-bp), gltA (539-bp), and rnpB (336-bp) from all macaques and pools of lice were identical; they differed from from those of B. quintana strain Toulouse by1�?"3 bp . Phylogenetic markers rnpB, 16S rRNA, and 23S rRNA (11) were amplified and sequenced from the strain identified in this study (RM-11) (Technical Appendix Table 1). Phylogenetic analysis of their combined sequence alignment placed the RM-11 strain on a separate branch along with the strain of B. quintana from a cynomolgus macaque and in the same clade as strains from patients in Europe who had trench fever (strains Toulouse and Fuller) (Figure 2, panel B).

To evaluate the ability of the isolate to cause disease, we intravenously inoculated 4 Bartonella spp.�?"negative rhesus macaques with B. quintana isolated from a blood sample of a macaque from this study and twice passaged on agar (detailed methods described in the Technical Appendix). Bacteremia reached a peak in 1 monkey on day 7 postinoculation (160 CFU/mL), in 2 monkeys on day 14 postinoculation (290 and 240 CFU/mL), and in 1 monkey on day 42 postinoculation (240 CFU/mL). Bacteremia then dropped to below a detectable level after 15 weeks postinoculation for all monkeys (Technical Appendix Figure 2). A relapsing pattern of bacteremia was observed during the experiment. Rectal temperature, hemogram, and blood biochemistry results for the 4 monkeys remained within normal limits.

The animal facility employees who had direct contact with monkeys during cage cleaning and feeding activities were tested for B. quintana infection. Paired serum samples collected at 2 time points 3 months apart were tested for IgG against B. quintana by indirect immunofluorescence assay, as described (12). The baseline serum samples were all negative at a dilution of 1:64. Among the serum samples collected 3 months later, 3 had IgG titers of 256, 1 had a titer of 512, and 4 were negative. For all blood samples collected at the 2 time points, PCR detection, blood-smear staining, and blood culture for Bartonella spp. were negative. Analysis of questionnaires revealed that all 4 of the workers with evidence of seroconversion reported lice exposure; 2 of them were scratched or bitten by monkeys.

We demonstrated high prevalence of B. quintana in a colony of rhesus macaques and postulated the transmission among macaques by P. obtusus lice. Our findings suggest that macaques are susceptible to B. quintana infection and can sustain vector infection and subsequent transmission. In addition, rhesus macaques showed long-lasting chronic bacteremia without apparent clinical abnormalities after experimental inoculation, suggesting a high level of adaptation of the pathogen to macaques.

It is unknown how the macaques were initially exposed to infected lice or how the lice became infected with B. quintana. We postulate that the lice became infected with B. quintana from an infected macaque and thereafter acted as efficient vectors among the rest of the macaques in the colony. We cannot completely exclude the possibility that transmission occurred through direct contact between macaques within the colony; however, we did not observe any skin scratches or wounds on the animals.

Four workers involved with care of the macaques showed seroconversion to antigens derived from our strain. This finding may relate to exposure to the P. obtusus lice found on macaques in the animal facility; however, we cannot exclude the possibility of direct contact with these animals as the mode of Bartonella spp. transmission because information obtained from the questionnaires indicates that 2 of the 4 seropositive workers were scratched or bitten by the colony�?(tm)s macaques. No clinical signs were observed from these persons, indicating an asymptomatic course of B. quintana infection, which has been frequently reported in other studies (1,13). However, we cannot exclude the possibility that bacteremia continued for an extended time in humans, because the animal care personnel were sampled only 2 times, so we might have missed bacteremia of short duration. Bacterial levels obtained after monkey inoculation was low compared with levels in the initial inoculum, a finding similar to that of a previous study (14).

In summary, our findings suggest that the macaques might serve as reservoir hosts for B. quintana and that lice might act as efficient vectors. Our data also indicate that macaques could be a source for human infection with B. quintana. Further research is needed to understand the underlying mechanism of B. quintana transmission by the P. obtusus louse.

Mr Li is an MD candidate in the State Key Laboratory of Pathogen and Biosecurity, Beijing Institute of Microbiology and Epidemiology. His research interests include microbiology, epidemiology, and ecology of vector-borne diseases.

We are grateful to Ying Bai for her help with culture of B. quintana.