An outbreak of foot-and-mouth disease caused by serotype O virus occurred in cattle and pigs in South Korea during November 2010–April 2011. The highest rates of case and virus detection were observed 44 days after the first case was detected. Detection rates declined rapidly after culling and completion of a national vaccination program.

Foot-and-mouth disease (FMD) is a highly contagious disease caused by foot-and-mouth disease virus (FMDV; family Picornaviridae, genus Aphthovirus). FMDV serotypes O, A, and Asia1 are widespread in Southeast Asia (1). In South Korea, small-scale outbreaks of FMDV infection caused by serotype O occurred in March 2000, May 2002, and April 2010 (2–5), and an outbreak caused by serotype A occurred in January 2010 (6). In contrast, an outbreak during November 2010–April 2011 was much more widespread (7). We reviewed the progression of this outbreak and methods used to control it, including culling and vaccination of pigs and cattle.

Because many cattle farms were located in the areas surrounding the pig-farming complex, the virus was detected mainly in cattle during the next 25 days (Technical Appendix Figure 1). After the first detection, the disease spread to 75 cities or counties in 11 provinces over 144 days, through April 21, 2011; the only provinces not affected were Jeonbuk, Jeonnam, and Jeju (Figure 1). As soon as an outbreak was reported, animal movement restrictions were imposed, and a 3-km radius protection zone and 10-km radius surveillance zone were set around the outbreak area.

FMD spread throughout Gyeongbuk Province until December 14; at the same time, it spread rapidly to other regions, including the provinces of Gyeonggi (December 15), Gangwon (December 21), and Incheon (December 23) (Figure 1). For emergency disease control, vaccines were initially administered to cattle in these outbreak areas on December 25. However, FMD continued to spread into additional provinces during January 2011, with outbreaks occurring in Chungnam (January 1), Chungbuk (January 3), Daegu (January 17), and Gyeongnam (January 24). Nationwide vaccination was implemented on January 13, and the last reported case occurred on April 21 in Youngcheon City, Gyeongbuk Province.

An FMD vaccine of high potency was imported for emergency vaccination; the vaccine used FMDV strain O1 Manisa (8). A postvaccination analysis using serum samples collected from vaccinated animals and viruses isolated in the field showed the vaccine’s high efficacy in the field. Cattle in the affected regions were vaccinated first, on December 25; later, vaccination was expanded to the whole cattle population, with vaccination completed by January 31, 2011. Pigs were vaccinated 14 days after the cattle (January 8), and the whole pig population was also vaccinated by the end of January.

According to national policy, culling began in November 2010 for all animals on farms with infected animals. Once vaccination was expanded nationwide in mid-January 2011, a vaccination-to-live policy was implemented; that is, vaccinated animals on farms with infected animals were culled only if the outbreak began within 2 weeks after vaccination but not if the outbreak began >2 weeks after vaccination. Most culled animals were disposed of by burial, which was regarded as a suitable method for a large-scale outbreak, given its advantage of easy handling within a short time. Approximately 3.48 million animals (151,425 cattle, 3,318,299 pigs, 8,071 goats, and 2,728 deer) were buried at 4,583 burial sites (Technical Appendix Figure 2). Some farms that were required to cull livestock because of FMD risk did not undertake the process in a timely manner, which contributed to a spike in new infections on the 38th–64th days after the outbreak began (January 4–31, 2011) (online Technical Appendix Figure 3). These new infections, mainly among pigs, occurred in Chungnam, Chungbuk, Gangwon, Gyeongnam, and Gyeonggi provinces. 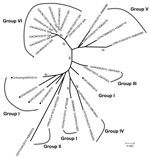 The outbreak quickly spread nationwide across a large distance. This rapid spread occurred for several reasons: 1) the first infection was in a pig-farming complex, and pigs excrete the virus in large amounts; 2) detection of the first infection was delayed; 3) FMDV-contaminated feces from the index pig-farming complex was moved to other provinces to be recycled for use as fuel on November 17, before the first outbreak; 4) the virus has increased stability during the winter months, enabling it to be transmitted more easily; 5) culling of infected animals was not implemented quickly enough by affected farms; and 6) the distance between farms in the area was small.

The FMD virus is believed to have entered South Korea around November 9–16, 2010; the first clinical signs in pigs appeared on November 23, and serologic investigation found that the time point for FMD infection was November 14. The virus might have been brought into the country as a result of a farmer’s trip to Southeast Asia in early November.

FMDV isolates from Mongolia, Vietnam, and other countries in Asia largely group into 2 phylogenetic clusters on the basis of nucleotide similarities (1). To determine the relationship between the South Korea virus strain and those from other countries in Asia, we analyzed the viral protein 1 nucleotide sequence of an FMDV virus isolate from the first FMD case, in November 2010. The sequence showed >99% identity with the O serotype; this type also matched those found in Gyeonggi Province and another location in Gyeongbuk Province during December 2010. However, a group of FMD viruses identified in South Korea and People’s Republic of China (group 1) showed 6 amino acid residues of viral protein 1 different from those of other seasons or countries (Table 2). In addition, among other FMD outbreaks identified in neighboring countries, viruses that originated in China had the most similar composition in amino acid residues to those from South Korea (Table 2; Figure 2) (1,9).

An outbreak of FMD in South Korea during November 2010–April 2011 was caused by serotype O FMDV and affected ≈3,700 farms; 153 farms were identified as index locations for new outbreaks. A total of 3.48 million susceptible animals were culled, including cattle and pigs. A vaccination program was effective in controlling the outbreak, and FMD incidence declined rapidly after its completion.

We thank the staff of the Disease Control Department at the Animal, Plant and Fisheries Quarantine and Inspection Agency, who worked to control the FMD outbreak, and staff who assisted in collecting samples from animals with suspected FMD cases.

This research was supported by a grant from the Animal, Plant and Fisheries Quarantine and Inspection Agency’s National Animal Disease Research Project.

Page created: March 04, 2013
Page updated: March 04, 2013
Page reviewed: March 04, 2013
The conclusions, findings, and opinions expressed by authors contributing to this journal do not necessarily reflect the official position of the U.S. Department of Health and Human Services, the Public Health Service, the Centers for Disease Control and Prevention, or the authors' affiliated institutions. Use of trade names is for identification only and does not imply endorsement by any of the groups named above.