Bat species worldwide have been implicated as reservoirs for several emerging viruses, such as lyssaviruses, henipahviruses, severe acute respiratory syndrome–associated coronaviruses, and filoviruses. Bats have several physiologic, cellular, and natural history characteristics that may make them particularly suited to their role as reservoir hosts (1,2).

Chordopoxviridae is a subfamily of Poxviridae that contains large double-stranded DNA viruses that replicate in the cellular cytoplasm and are known to infect a wide range of vertebrates. Many of these viruses cause zoonotic disease in humans. Although poxviruses are known to have incorporated host genes into their genomes to subvert the host immune system (3), bats and poxviruses may also serve as facilitators in the horizontal transfer of transposable elements to other species (4–6). We report the isolation and characterization of a viable poxvirus from bats.

During 2009–2011, six (5 male and 1 sex unknown) adult big brown bats (Eptesicus fuscus) were brought to a wildlife hospital and rehabilitation center (PAWS Wildlife Center, Lynnwood, WA, USA) during late spring or summer because they could not fly. All but 1 of the bats had >1 visibly swollen and occasionally contused joints involving the long bones of the legs and wings; 1 had contusions of the oral commissures.

All bats received care that included antimicrobial drugs and nutritional and fluid support. However, minimal or no clinical improvement was observed, and the bats showed progressive joint swelling and increased lethargy. All bats were eventually euthanized. In all instances, gross lesions were limited to the joints.

Bat tissues were sent to a facility that specializes in the pathologic analysis of nondomestic species (Northwest ZooPath, Monroe, WA, USA) for further investigation. Histologic examination showed severe fibrino-suppurative and necrotizing tenosynovitis and osteoarthritis that involved the long bones and occasionally facial flat bones and joints with occasional localized vasculitis. No bacterial or fungal agents were seen by light microscopy of specimens stained with hematoxylin and eosin, Giemsa, Warthin-Starry, Brown and Brenn, or Gomori methenamine silver stains or in a Wright-Giemsa–stained cytologic preparation of a joint aspirate. Cultures for aerobic and anaerobic bacteria, and cultures of the joint from 1 bat for mycoplasma showed negative results.

Material was taken from the wing and joint of an affected bat for real-time PCR testing and cell culture isolation. Wing and joint material was positive by real-time PCR for a poxvirus with low genomic G + C content (7). The elbow joint of 1 bat was then processed for poxvirus growth in cell culture. The specimen was emulsified in 500 mL of sterile phosphate-buffered saline by using a tissue grinder. Viral nucleic acid was extracted by using EZ1 Advanced XL (QIAGEN, Valencia, CA, USA). Ten microliters of homogenate was added to 1 mL of RPMI 1640 medium supplemented with 2% fetal bovine serum, -glutamine, and penicillin/streptomycin. Growth medium from a T25 flask containing green monkey kidney epithelial cells (BSC40) was removed and the virus mixture added. The flask was incubated for 1 hour at 56°C, after which 6 mL of RPMI 1640 medium was added to each flask. Cells and supernatant were harvested after 95% of the monolayer was infected.

Negative stain electron microscopy was performed by using cell culture supernatant. Two microliters of supernatant was pipetted onto a 300-mesh formvar-carbon–coated nickel grid. After a 10-min incubation, supernatant was blotted and the grid was rinsed. A negative stain composed of 5% ammonium molybdate, pH 6.9, and 0.1% trehalose (wt/vol) was briefly applied to the grid and blotted. The grid contents were visualized by using a Tecnai BioTwin electron microscope (FEI Company, Hillsboro, OR, USA) operating at 120 kV. Digital images were captured by using a 2K × 2K camera (Advanced Microscopy Techniques). Poxvirus particles were identified in cell culture supernatant (Figure 1, panel B). 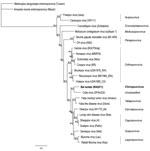 Genome sequencing produced data that were used to construct a phylogenetic tree (Figure 2). Virus DNA sequence data were collected by using the Illumina platform (www.illumina.com/technology/sequencing_technology.ilmn). DNA sequences from 7 open reading frames (A7L, A10L, A24R, D1R, D5R, H4L, and J6R, according to reference sequence vaccinia virus Copenhagen) were extracted on the basis of sequence similarity. Data were deposited in GenBank under accession nos. KC181855–KC181861. Open reading frames were translated into amino acid sequences and aligned by using the ClustalW alignment option in Geneious version 6.0.5 (www.geneious.com/). The tree search was conducted by using MrBayes in Geneious 6.0.5 under default settings and Amsacta moorei (red hairy caterpillar) entomopoxvirus (Moyer) was used as the outgroup with a burn in of 10%.

Historically, osteomyelitis with arthritis has been reported in smallpox patients (osteomyelitis variolosa) and in smallpox vaccine recipients (vaccinia osteomyelitis), but did not occur frequently (8). In such cases, variola virus particles were detected in joint fluid (9), and vaccinia virus was isolated from a bone biopsy specimen of an affected limb (10,11). It is unclear whether the manifestation of arthritis in bats is a normal or rare result of the infection, or a new development in the evolution of the virus. Likewise, the frequency of poxvirus infection in big brown bats is impossible to estimate at this stage. Because the public is generally cautioned against handling downed bats because of possible rabies infection, underestimation of prevalence is likely. Infectious disease surveys of bats might have missed the infection up to this point because no obvious lesions are apparent on the skin, and swollen joints might have been classified as being arthritis without suspicion of infectious disease involvement.

Results of at least 3 investigations that involved detection of viral DNA detection in bat guano have been published; 2 involved bats from North America and 1 involved bats in China (12–14). No evidence of poxviruses was found in the animals investigated in those studies. The zoonotic potential or host range of the virus described herein is not known, but at a minimum, the virus could pose a newly emergent threat to bat populations. Likewise, it is not clear if the infection seen in bats is a result of spillover or possibly an introduction of the virus into a new area. The isolate does not group with any of the 8 characterized genera of Chordopoxvirus; its nearest neighbor is Cotia virus, an as yet unclassified chordopoxvirus first isolated from sentinel suckling mice in a state reserve in Cotia County, São Paulo State, Brazil, in 1961 (15).

Although the 2 viruses are nearest neighbors, levels of shared nucleotide and amino acid identity between them suggest they should likely be considered separate genera (Table, Appendix). We propose that the bat-derived isolate be distinguished as part of a new lineage with the suggested genus designation Chiropoxvirus. Further efforts should be undertaken to determine whether Cotia virus should be included in this genus. The bat-derived virus requires a new species designation for which we propose Eptesipox virus because of its isolation from an Eptesicus fuscus bat specimen.

Dr Emerson is a microbiologist at the Centers for Disease Control and Prevention. Her research interests include the evolution, ecology, and epidemiology of viral zoonoses.

We thank Heather Bair-Brake for initially contacting the poxvirus staff at the Centers for Disease Control and Prevention regarding the events.

Page created: April 24, 2013
Page updated: April 24, 2013
Page reviewed: April 24, 2013
The conclusions, findings, and opinions expressed by authors contributing to this journal do not necessarily reflect the official position of the U.S. Department of Health and Human Services, the Public Health Service, the Centers for Disease Control and Prevention, or the authors' affiliated institutions. Use of trade names is for identification only and does not imply endorsement by any of the groups named above.