G10P[14] rotavirus strains are rarely reported as the source of infection in humans. Of 7 previously reported G10P[4] rotavirus infections, 1 each was in the United Kingdom and Thailand and 5 were in Slovenia (4). During 2011, the Australian Rotavirus Surveillance Program identified 6 G10P[14] strains in the Northern Territory (NT). We report the characterization of G10P[14] strains detected in Australia.

Six rotavirus-positive specimens collected from NT were genetically untypeable by reverse transcription PCR (Technical Appendix). Sequence analysis of the VP7 and VP4 genes of these strains demonstrated highest nucleotide identity with G10 and P[14] rotaviruses, respectively. The G10P[14] strains were from specimens collected from 5 children and 1 adult (84 years of age) during August and September 2011 (Table 1). Of the 6 G10P[14] case-patients, 5 were from Tennant Creek, NT, ≈1,000 km south of Darwin in northern Australia; the residence of the other case-patient is unknown. All strains were detected in indigenous Australians. Specimens V585, V582, and WDP280 were collected from case-patients who had received 2 doses of Rotarix, and specimen SA179 was collected from a case-patient who had received 1 dose. No vaccination data were available for the case-patient from whom specimen SA175 was collected.

Sanger sequencing was used to generate the complete genome of specimen V585 (Technical Appendix). For the other 5 G10P[14] strains, the complete open reading frames of VP7, VP4, NSP4, and NSP5 and partial reading frames of VP1, VP2, VP3, VP6, NSP1, and NSP2 were sequenced (Table 2, Appendix). These 5 strains demonstrated >99.5% sequence identity to V585, confirming that V585 was representative of all 6 strains. The genotype of each segment of V585 was determined by using RotaC version 2.0 (http://rotac.regatools.be), a web-based genotyping tool for group A rotaviruses; a G10-P[14]-I2-R2-C2-M2-A11-N2-T6-E2-H3 constellation was identified. Maximum-likelihood phylogenetic analyses were performed by using full-length open reading frame nucleotide sequences of V585 and other group A rotavirus strains (Technical Appendix). The nucleotide sequences of the 11 gene segments of V585 and the VP7 and VP4 genes of the other 5 G10P[14] strains were deposited in GenBank (accession nos. JX567748–JX567768). 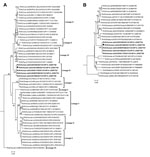 Figure 1. . Phylogenetic trees constructed from the nucleotide sequences of viral protein (VP) 7 gene (A) and VP4 gene (B) of rotavirus strain V585; other group A rotavirus strains represent the G10...

Figure 2. . Phylogenetic trees constructed from the nucleotide sequences of genes of rotavirus strain V585 and other group A rotavirus strains representing the R2, C2, M2, I2, A11, N2, T6, E2, and...

Phylogenetic analysis of VP1, VP2, NSP2, and NSP3 demonstrated that V585 clustered with genes of rotaviruses identified in the mammalian order Artiodactyla (bovine, ovine, and camelid) and human strains derived from zoonotic infections (Figure 2, Appendix). Similarly, VP3, which clustered with the RVA/human-tc/AUS/MG6/1993/G6P[14], was thought to be the result of zoonotic transmission (5) (Figure 2, Appendix, panel C). NSP1, NSP4, and NSP5 clustered with sequences from artiodactyl hosts, however branching was not supported by significant bootstrap values (Figure 2, Appendix, panels E, H, I). The NSP1 and NSP5 genes were divergent from sequences that define their respective genogroups (Table 3). Overall, the 11 genome segments of the G10P[14] strains from NT had relatively low nucleotide identity (80.2%–96.9%) to other strains in each of the respective genogroups, demonstrating that this G10P[14] strain identified in Australia was divergent from other strains identified globally (Table 3).

The V585 strain possessed a G10-P[14]-I2-R2-C2-M2-A11-N2-T6-E2-H3 genome constellation. With the exception of the VP7 gene, the constellation is consistent with G6P[14] and G8P[14] strains identified globally: G6/G8-P[14]-I2-(R2/R5)-C2-M2-(A3/A11)-N2-T6-(E2/E12)-H3 (6). Human P[14] strains are related to rotavirus strains isolated from even-toed ungulates belonging to the mammalian order Artiodactyla (6). Consistent with this observation, each individual genome segment of V585 was most closely related to artiodactyl-derived strains or human zoonotic rotavirus strains characterized to be derived from artiodactyl hosts. In Australia, G10P[11] strains have been isolated from calves, and G8P[14] strains and G6P[14] strains have been isolated from children (7,8). However, the V585 strain demonstrated modest nucleotide identity with these 3 strains identified in Australia. These data suggest that V585 is novel and probably derived from a strain circulating in an artiodactyl host and transmitted to humans. A large feral animal population, including goats, rabbits, and camels, exists in the region where these specimens were collected, thereby supporting the possibility of an interspecies transmission event (9).

Vaccination with the monovalent G1P[8] Rotarix is available in NT, where 2-dose vaccine coverage is 74% for indigenous Australian infants (10). Rotarix vaccination status was available for 4 of the 5 children in this study: 3 were fully vaccinated, and 1 had received the primary dose. The heterotypic G10P[14] strain identified in these vaccinated children suggests a lack of protective immunity, although it cannot be excluded that vaccination provided protection against severe disease from other genotypes. Vaccine effectiveness against gastroenteritis leading to hospitalization has been variable in NT; vaccine was estimated to be 77.7% effective during a 2007 G9P[8] outbreak (11) and 19% effective against a fully heterotypic G2P[4] strain in 2009 (12). Rotarix has been effective for decreasing rotavirus infection notification rates in Darwin, NT (10), and New South Wales (13). However, in 1 location in central NT, reported rotavirus infection rates have remained similar in the vaccine era to those in the prevaccine era (10), suggesting low vaccine uptake, low vaccine take, or waning immunity. The living conditions of the indigenous Australian population in central NT are typically crowded, with inadequate facilities for sanitation and food preparation (14). The number of diarrheal disease cases is high: admissions coded for enteric infections in NT indigenous Australian infants occur at a rate 10-fold higher than among nonindigenous Australian infants (15). The concurrent medical conditions present in the NT indigenous Australian population, combined with diversity of circulating rotavirus types, may have contributed to a lack of immunity. Detection of these unusual G10P[14] strains emphasizes the need for continued rotavirus surveillance to help guide current and future vaccination strategies.

Dr Cowley is a molecular virologist at the Murdoch Childrens Research Institute. His research interests include the molecular characterization and evolution of rotavirus strains in the community of Australia.

We acknowledge the assistance of Heather Cook, Centre for Disease Control, Department of Health, NT, for collection and supply of patient information.

C.D.K. is a codeveloper of an investigational rotavirus vaccine.