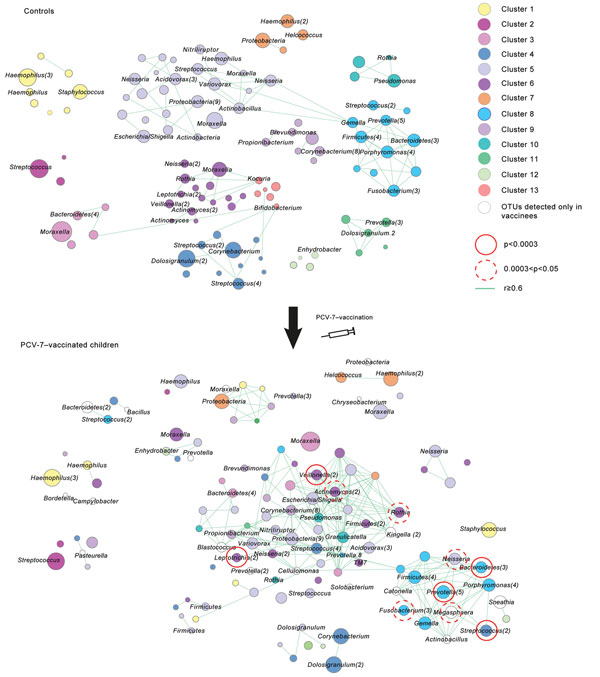 Figure 4. Microbial association network between operational taxonomic units (OTUs) in nonvaccinated children (controls) and children at 12 months of age who were vaccinated with 7-valent pneumococcal conjugate vaccine (PCV-7)Hierarchical clustering with average linkage and Pearson correlation distance is used to identify patterns of co-occurrence or similar abundance patterns between OTUs in the complete sample set of controls and PCV-7–vaccinated childrenResults are depicted in a microbial association networkLines connecting particular OTUs depict positive correlations (correlation coefficient r ≥0.6) between individual OTUsClusters of OTUs are discriminated by different colorsTo enable visualization of shifts in cluster composition, OTUs in PCV-7–vaccinated children are colored according to the cluster they originated from in control childrenNode sizes reflect average relative abundance of the OTU in the selected population (i.e., PCV-7–vaccinated or controls by using a log2 scalingOTUs that were significantly higher in vaccinated children are indicated by red circles around nodesFor visualization purposes, we did not depict all OTU names at the nodesAlso, if multiple OTUs of the same genus clustered together, we depicted only 1 node of that genus and indicated the number of representing OTUs for that genus in parenthesesIn 12 month-old children (controls), we identified 13 OTU clustersHaemophilus influennzae and Staphylococcus aureus clustered together in a small cluster distant from the other OTUs (cluster 1)Streptococcus pneumoniae formed, together with 2 other OTUs, a separate cluster that was also distant from the other OTUs (cluster 2)Cluster 3 contained, among others, the largest Moraxella catarrhalis OTUClusters 4–13 represent the remaining clusters and showed on average more OTUs per cluster and more interrelatedness with one anotherClear shifts in cluster composition and distribution between vaccinated and unvaccinated children were also observedStaphylococcus aureus drifted from cluster 1 in controls toward cluster 8 in vaccinated childrenThis particular cluster increased in vaccinees because of increased abundance of OTUs already present in that cluster and because of emergence of new OTUs within the clusterIn addition, after vaccination, cluster 3 including Moraxella catarrhalis became part of 1 large cluster, which was composed mostly of OTUs in clusters 4–6, 9, and 10The 10 OTUs that had expanded in vaccinated children all originated from clusters 6 and 8, or were newly emerged, such as Megasphaera spp.