African swine fever virus (ASFV) was first reported in eastern Europe/Eurasia in 2007. Continued spread of ASFV has placed central European countries at risk, and in 2014, ASFV was detected in Lithuania and Poland. Sequencing showed the isolates are identical to a 2013 ASFV from Belarus but differ from ASFV isolated in Georgia in 2007. 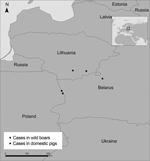 Figure 1. Locations of 4 cases of African swine fever in wild boars in the European Union countries of Poland and Lithuania and location of a 2013 outbreak among domestic pigs in Belarus,...

African swine fever (ASF) is a devastating disease of domestic and wild suids, and there is no vaccine to protect against the disease. ASF is caused by a DNA arbovirus, African swine fever virus (ASFV), belonging to the family Asfaviridae (1); the virus genome is 170–192 kb long. ASF is endemic in sub-Saharan countries and in Sardinia (Italy) and has become more prevalent in Russia and the Caucasus region (2) since its spread from eastern Africa to Georgia (in the Caucasus region) in 2007 (3). The ongoing spread of ASFV to adjacent eastern European countries, such as Ukraine (4,5) and Belarus (6), and the uncontrolled spread of the disease in Russia have placed the bordering areas of the European Union at high risk for the introduction of ASFV. In early 2014, the first cases of ASF in the European Union were reported; the cases occurred in 4 wild boars in areas of Lithuania and Poland that border the eastern European country of Belarus (7,8) (Figure 1). To further our knowledge of the epidemiology and spread of ASFV, we determined the virus sequences of the ASFVs isolated in Poland and Lithuania by using international standardized procedures (9) and by the analysis of an additional ASFV genome marker region characterized by the presence of tandem repeat sequences (TRSs). We report the genetic characterization of these ASFVs.

On January 24, 2014, the European Commission and the World Organisation for Animal Health received reports from Lithuanian authorities of 2 cases of ASF in wild boars. One of the infected animals was found in Salcininkai and the other in Varena, 5 km and 40 km, respectively, from the Belarus border (7). Then, on February 14 and 17, 2014, reports of 2 cases of ASF in wild boars were received from northeastern Poland (Sokolka County, Podlaskie Province). One of the infected animals in Poland was found in the municipality of Szudzialowo; the other was found in Kruszyniany, a forest area (8). The 2 wild boars in Poland were found dead ≈900 m and ≈200 m, respectively, from Poland’s border with Belarus.

ASFV-positive clinical samples (spleen, kidney, lung, bone marrow) from the 4 infected wild boars were sent to the European Union reference laboratory for ASF, Centro de Investigación en Sanidad Animal (CISA-INIA), Madrid, Spain, for confirmatory testing and genetic characterization. After the presence of ASFV was confirmed in samples, initial genetic characterization was performed by using standardized genotyping procedures on virus DNA extracted directly from homogenized tissues and from bone marrow samples. These analyses included the C-terminal end of the p72 gene, the full sequence of the p54 gene, and the central variable region within the B602L gene (9). We also included in the study 21 genotype II ASFVs that were isolated from wild and domestic pigs in Russia and the Caucasus region during April 2007–June 2013 (Table). 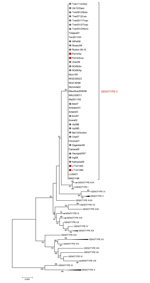 Figure 2. Minimum evolution (ME) phylogenetic tree of African swine fever virus (ASFV) isolates from Lithuania and Poland based on the C-terminal end of the p72 coding gene relative to the 22 p72...

We compared the nucleotide sequences obtained from the p72- and p54-based PCRs with those of previously described representative isolates (10). We used Clustal Omega (http://www.clustal.org/) to perform multiple sequence alignments. Minimum evolution trees, rooted at the midpoint, were constructed by using MEGA V6.0 (http://www.megasoftware.net/) with the p-distance nucleotide substitution model. The 2014 ASFVs from Lithuania (LT14/1482, LT14/1490) and Poland (Pol14/Sz and Pol14/Krus) clustered, as expected, within p72 genotype II (Figure 2) and showed 100% nucleotide identity with all compared ASFV isolates from eastern Europe across the 478-bp C-terminal p72 gene and the 558-bp full length p54 gene. We obtained the same result by sequencing the central variable region within the B602L gene, revealing 10 copies of amino acid tetramer repeats that were 100% identical and unique to those of the ASFV circulating in the Caucasus regions since 2007 (11).

Figure 3. Partial nucleotide sequence alignment of the intergenic region between I73R and I329L in African swine fever virus (ASFV) isolates from eastern and central Europe, including a virus isolated in 2007 in...

Although the central variable region has proven useful for resolving epidemiologic complexities at the genotype (12), country (13), and region levels, additional genome markers are required to determine the origin and to map the spread of closely related ASFV isolates circulating in eastern Europe. Thus, we designed a set of primers, named ECO1A (5′-CCATTTATCCCCCGCTTTGG-3′ binding site 172,270–172,290) and ECO1B (5′-TCGTCATCCTGAGACAGCAG-3′ binding site 172,616–172,626), to amplify a 356-bp fragment located between the I73R and I329L genes and characterized by the presence of TRS (14). Primer binding sites were based on the genome of the ASFV from Georgia (GenBank accession no. FR682468.1). Using the same reaction conditions as used for full p54 gene amplification (10) and an annealing temperature of 60°C, we generated 367-bp amplicons from isolates from Ukraine, Belarus, Lithuania, and Poland. The estimated size of the remaining isolates from eastern Europe that were included in the study was 356 bp (data not shown). Nucleotide sequence analysis of the PCR products revealed that the size difference was caused by the insertion of an additional TRS (GGAATATATA) at nt 136 (Figure 3). All sequences generated in this study were submitted to GenBank under accession nos. KJ620028–51.

Current available molecular data derived by using standardized genotyping procedures (9) have indicated the presence of only 1 ASFV variant. That variant belongs to p72 genotype II, which has been circulating in eastern European countries since the introduction of ASFV into Georgia in 2007 (11). In agreement with those findings, results from our analysis of the 3 independent regions included in the classical genotyping showed that sequences for ASFV isolates from Lithuania and Poland were 100% homologous with those for ASFVs from eastern Europe. However, the long-term presence of ASFV in Russia and the Caucasus regions and the rapid spread of the virus to neighboring countries highlight the need for finding additional ASFV genome markers capable of discriminating among circulating virus isolates so that we may better determine their source and evolution.

The whole-genome sequence analysis of ASFV has identified some regions that contain tandem repeat arrays that have proven useful for discriminating between closely related ASFVs (15). Thus, the approach described in our study focused on analysis of the TRS in the intergenic region between the I73R and I329L genes at the right end of the genome (14). The results showed that the viruses from Poland and Lithuania had a TRS insertion identical to that present in ASFV isolates from Belarus and Ukraine. This TRS insertion was absent in the remaining viruses from eastern Europe, including those obtained in Tver Oblast, Russia, in 2012 and in Georgia in 2007. These molecular data, together with the epidemiologic findings, confirmed that the ASFVs detected in Poland and Lithuania most probably originated from Belarus. However, knowledge of the epidemiology of ASF and a full understanding of the evolution and spread of ASFV in this region require additional sequence analysis of ASFVs currently circulating in Russian regions bordering Belarus and Ukraine.

Our results show the genetic variability among ASFVs circulating in eastern Europe and describe a new method that can be useful for distinguishing between closely related ASFV isolates. Such genetic data are essential for determining the source and studying the evolution of ASFV isolates and to fully elucidate the spread of ASFV in the eastern and central European countries.

Dr Gallardo is the laboratory research coordinator of the European and Food and Agricultural Organization of the United Nations Reference Laboratory for African swine fever at CISA-INIA. Her research work mainly focuses on molecular characterization, epidemiology and diagnosis of ASF.

We appreciate the intellectual and practical contributions of our colleagues at the National Reference Laboratories for ASF in Poland, Lithuania, Belarus, and Ukraine and at the European Union reference laboratory for ASF. We are especially grateful to Elena Martín and Alicia Simón for technical assistance and Irene Iglesias for map generation.