We determined the prevalence of influenza A virus in dogs in Taiwan and isolated A/canine/Taiwan/E01/2014. Molecular analysis indicated that this isolate was closely related to influenza A(H6N1) viruses circulating in Taiwan and harbored the E627K substitution in the polymerase basic 2 protein, which indicated its ability to replicate in mammalian species.

Infections with influenza viruses are rare in dogs. However, interspecies transmission of an equine influenza A(H3N8) virus to dogs was identified during a respiratory disease outbreak in Florida, USA, in 2004 (1). Influenza A(H6N1) virus is the most common naturally occurring avian influenza virus in Taiwan (2). Therefore, to determine to the prevalence of influenza A virus infection in dogs in Taiwan, we performed serologic analysis, 1-step reverse transcription PCR (RT-PCR) screening, and virus isolation.

All serum specimens were tested for antibodies against influenza A virus by using a species-independent blocking ELISA (Influenza A Virus Antibody Test Kit; Idexx, Westbrook, ME, USA). All antibody-positive serum specimens were further tested by using a hemagglutination inhibition (HI) assay. HI was determined according to procedures recommended by the World Organisation for Animal Health. Chicken erythrocytes (1%) were used. Serum samples were treated with receptor-destroying enzyme (Denka Seiken, Tokyo, Japan) before conducting the assay to destroy nonspecific inhibitors (3). A/chicken/Taiwan/2838V/2000 (H6N1) and A/chicken/Taiwan/1209/03 (H5N2) viruses were used as antigens.

Phylogenetic trees were constructed with complete nucleotide sequences obtained from the Global Initiative on Sharing All Influenza Data (http://platform.gisaid.org/epi3/frontend#185d95) and GenBank. Multiple sequence alignments and phylogenetic analyses were performed by using MEGA6 software (5). Sequences were aligned by using the ClustalW method (http://www.genome.jp/tools/clustalw/). Trees were constructed by using the maximum-likelihood method and analysis with 1,000 bootstrap replications.

Nasal swab specimens from 4/185 (2.1%) dogs were positive by RT-PCR for influenza virus M gene. All 4 RT-PCR positive dogs had nasal discharges or coughing. Three of these dogs were <6 months of age and adopted from an animal shelter (n = 1) or rescued from the streets (n = 2). The fourth dog was a 15-year-old household pet.

Influenza A virus was isolated from a 4-month-old dog co-infected with canine distemper virus. The virus influenza isolate was designated A/canine/Taiwan/E01/2014 (GenBank accession nos. KM20333–KM203344). This dog was rescued from the streets and had severe purulent nasal discharge, cough, and fever. Chest radiographs showed a severe bilateral air bronchogram in the lung field. Serum specimens (collected on days 1, 7, 14, and 19 after hospitalization) from this dog were assessed by using ELISA and HI assay, but no seroconversion was observed.

Sequence homology of 8 influenza virus gene segments from A/canine/Taiwan/E01/2014 (H6N1) was compared with segments in the Global Initiative on Sharing All Influenza Data (Table 1). Hemagglutinin (HA) and neuraminidase (NA) genes of this virus had the highest nucleotide sequence similarity (99%) with A/chicken/Taiwan/1843/2012 (H6N1) and A/chicken/Taiwan/2084/2012 (H6N1), respectively. Polymerase basic 2 (PB2), PB1, nucleoprotein (NP), and nonstructural protein (NS) genes were closely related to those of H6N1 subtype virus isolates from chickens in Taiwan (similarity range 97%–99%). Polymerase acidic (PA) and M genes had the highest nucleotide sequence similarity (99%) to A/chicken/Taiwan/2593/2012 (H5N2). On the basis of HA and NA sequence analysis results, A/canine/Taiwan/E01/2014 was designated an H6N1 subtype influenza virus.

Only 1 basic amino acid (PQIATR*G) was found at the HA cleavage site of A/canine/Taiwan/E01/2014. G228S substitution (H3 numbering) on the receptor binding site for HA was also observed for this virus, which indicated increased virus binding ability for the α2–6 sialic acid receptor (6,7). In NA, a 14-aa deletion in the NA stalk region was observed at aa positions 42–53 and 68–69, which is associated with virus circulation in domestic poultry. The amino acid H275Y substitution (oseltamivir resistance marker) in NA was not found in this virus. In the M2 protein, A/canine/Taiwan/E01/2014 had an S31N substitution, which suggested resistance to admantanes (8,9).

Other major signatures associated with replication ability in a mammalian host or pathogenicity were also observed, including E627K in the PB2 and the PDZ ligand domain at the C-terminal region of NS1 of this virus. Additional molecular comparisons with H6N1subtype virus (A/Taiwan/2/2013) isolated from humans (7,10,11) and from dogs experimentally infected H6N1 subtype virus (A/mallard/San-Jiang/275/2007) (12) were made (Table 2). 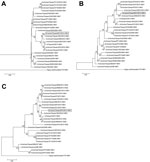 Figure. Phylogenetic relationship between influenza A(H6N1) virus A/canine/Taiwan/E01/2014 isolated from dogs in Taiwan (boxes) and other influenza A virus lineages. Maximum-likelihood analysis with bootstrap analysis was conducted with 1,000 replications. Only branches...

Phylogenetic analysis of HA and NA gene segments indicated that A/canine/Taiwan/E01/2014 belongs to the H6N1 lineage that has been circulating in chickens in Taiwan since 1997 (Figure, panels A, B). Although the lineage of internal gene segments (PB2, PB1, PA, NP, M, and NS) is composed mainly of H6N1 subtype viruses isolated in Taiwan, some H5N2 subtype isolates in the H6N1 lineage were observed (Figure, panel C; Technical Appendix).

Avian influenza A(H6N1) viruses have been widespread in chickens in Taiwan since 1972 (13–15). These viruses are clustered in a unique lineage that differs from viruses circulating in Hong Kong and southeastern China since 1997 (13). Unlike avian species, H6 subtype virus infections are rare in mammals.

Phylogenetic analysis showed that 8 eight virus genes were derived from H6N1 subtype viruses isolated in Taiwan. All 8 influenza virus genes found in the dog probably originated from avian sources. We speculate that a complete avian influenza virus had infected this dog. However, additional analysis is required to verify this hypothesis.

We thank the staff of the Heart of Taiwan Animal Care and National Taiwan University Veterinary Hospital for their assistance in sample collection.