To the Editor: Toxoplasma gondii, a zoonotic protozoan parasite for which felids are the only definitive hosts, can infect humans and other warm-blooded animals. Transmission usually occurs orally from oocysts shed by felids in water and on food, through tissue cysts in undercooked meat, or transplacentally. In particular, young cats shed oocysts that can sporulate and become infectious within a day, depending on temperature and humidity. Sporulated oocysts can survive in moist soil for months to years (1).

In September 2014, the number of dead squirrels reported to the Dutch Wildlife Health Centre and the Dutch Mammal Society increased suddenly. The red squirrel (Sciurus vulgaris) is the only species of squirrel endemic to the Netherlands. Members of the public claimed that squirrels were “dropping dead from trees.” Subsequently, the public was encouraged to report and submit dead squirrels. A total of 187 animals were reported through October 2014, of which 37 were submitted for necropsy. Necropsy included macroscopic examination; cytologic analysis of liver, spleen, lungs, and intestinal contents stained with hemacolor (Merck, Darmstadt, Germany); and histologic examination of samples of various organs fixed in formalin, embedded in paraffin, cut into 4-μm sections, and stained with hematoxylin and eosin.

For 8 adult animals, body condition (based on degree of fat storage and muscle development) was good; 12 juveniles were in poor condition. Typically, the trachea contained foam, and lungs were hyperemic and edematous. The liver was enlarged and pale, and the spleen was enlarged. In 13 animals, numerous small crescent-shaped organisms, with eccentrically placed nuclei consistent with tachyzoites of T. gondii, were identified by cytology in lung, liver, and spleen (2). Main histopathologic findings were pulmonary interstitial lymphoplasmocytic and neutrophilic infiltrates with edema and numerous intra-alveolar macrophages (17/20) and multifocal lymphoplasmocytic infiltrates with necrosis in the liver (13/20). Extensive splenic necrosis was occasionally observed (4/20). Intestines contained mild plasmacytic infiltrates. Numerous tachyzoites consistent with T. gondii were present in alveolar macrophages and epithelial cells, splenic macrophages, and hepatocytes. Duplicate slides were stained immunohistochemically by using polyclonal antibodies against T. gondii following a standard ABC protocol (3). Organisms stained for T. gondii in liver, spleen, lungs, and intestine. Toxoplasma was not detected in any brain. DNA was isolated (DNeasy Blood and Tissue Kit; QIAGEN, Hilden, Germany) from tissues of 14 squirrels and tested by quantitative PCR (1); T. gondii DNA was detected in 13. We successfully sequenced the T. gondii GRA6 gene for 11 squirrels and identified sequences to clonal type II T. gondii previously identified in sheep from the Netherlands (GenBank accession no. GU325790) (4). Incidental findings in the animals tested were encephalitis (2/20), coccidiosis (5/20), trauma (6/20), myocarditis (4/20), nephritis (1/20), lymphadenitis (1/20), and intestinal (3/20) and external (5/20) parasites. 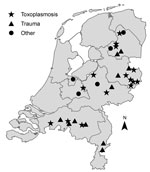 Figure. Spatial distribution of wild red squirrels (Sciurus vulgaris) investigated for Toxoplasma gondii and classified by cause of death, the Netherlands, 2014.

On the basis of necropsy and molecular findings, we conclude that 20 of 37 examined squirrels died of disseminated T. gondii type II infection. These animals included adults and juveniles and were not restricted to specific geographic areas (Figure). The remaining animals died of trauma (12/17) or other causes (5/17).

Red squirrels are susceptible to T. gondii, and infection can lead to death. However, in our sample, the proportion of squirrels that died of toxoplasmosis (>50%) was higher than in other studies (≈16%) (5–7). The apparent increase in squirrel deaths and unexpectedly high proportion of fatal T. gondii infections suggests a toxoplasmosis outbreak among red squirrels. Possible explanations for this surge in cases include increased exposure to the parasite, increased susceptibility to infection, or increased virulence of the pathogen. Clonal T. gondii type II, the strain most frequently involved in human cases and endemic to Europe and North America, was identified. An increased virulence of the pathogen could not be proven (8). On the basis of lymphoid hyperplasia in the spleen and lymph nodes, affected squirrels had no signs of immunosuppression. Thus, the most likely explanation is increased exposure to the parasite.

Sources of infection for red squirrels are not known; however, oocysts shed in cat feces may contaminate the nuts, fungi, shoots, and berries that constitute the diet of the squirrel. Stray, unspayed cats are common in the Dutch countryside. More than 3 million domestic cats (Felis domesticus) exist in the Netherlands, including several tens of thousands of free-roaming cats that reproduce (9). Determining the exact source of infection is important because humans also harvest wild fruits, nuts, and fungi from these areas. This outbreak highlights that contamination of the environment with T. gondii oocysts is of concern not only from a public health viewpoint but from a biodiversity perspective as well (1,10).

We thank R. Thomas for proofreading and J. van der Giessen for facilitating the molecular work.