During November 2012–July 2013, a marked increase of adenovirus type 7 (Ad7) infections associated with severe disease was documented among pediatric patients in Singapore. Phylogenetic analysis revealed close genetic links with severe Ad7 outbreaks in China, Taiwan, and other parts of Asia.

Human adenoviruses (HAdVs) are classified into >50 types and are associated with clinical manifestations that include respiratory, gastrointestinal, ocular, genitourinary, and neurologic disease (1). HAdV infections have been estimated to cause 5%–10% of acute respiratory illnesses in children <5 years of age. Although most infections are subclinical or result in mild upper respiratory tract illnesses, HAdVs can also cause severe pneumonia. Among the HAdV types, type 7 (Ad7) has most often been associated with severe respiratory disease (2).

Recent reports have noted increased incidence of severe Ad7 disease in Asia: among the general population and pediatric inpatients in Taiwan; among persons in a military training camp in Shaanxi, China; and among those in a police training center in Kuala Lumpur, Malaysia (2–4). During January–June 2013, physicians in Singapore noted an increase in HAdV pediatric inpatients. Here we characterize the clinical and molecular epidemiology of this outbreak by reviewing data from government hospitals, the military, and a nationwide influenza-like illness (ILI) laboratory surveillance network in Singapore.

We retrospectively reviewed demographic and clinical information of adenovirus infections reported in Singapore during January 2011–July 2013 in 3 populations: 1) pediatric inpatients at KK Women’s and Children’s Hospital (formerly known as Kandang Kerbau Hospital) and National University Hospital, which are the only government hospitals in Singapore that have pediatric departments; 2) military personnel; and 3) outpatients reported to the nationwide ILI surveillance network housed in the National Public Health Laboratories (NPHL). Institutional review boards of the participating hospitals approved this study.

Cases of HAdV infection among military personnel were detected by a sentinel surveillance program in 5 military camps in which occurrences of febrile respiratory illnesses, defined as presence of acute respiratory symptoms (cough, sore throat, or both) and fever (oral temperature ≥37.5°C) (5), are monitored. All male citizens of Singapore undergo 2 years of conscripted military service upon turning 18–19 years of age; new personnel continuously enter the camps. To identify cases among the civilian population, the NPHL ILI laboratory surveillance network processes upper respiratory tract samples from patients with acute onset of fever (oral temperature ≥38°C) and respiratory symptoms referred by physicians at 23 sentinel clinics (6).

Figure 1. Number of adenovirus cases by month, January 2011–July 2013, Singapore. A) The first confirmed case of adenovirus type 7 was reported in November 2012 in KK Women’s and Children’s Hospital. The...

During January 2011–July 2013, samples from 421 pediatric inpatients, 752 military personnel, and 85 pediatric outpatients from the NPHL ILI surveillance network were positive for adenovirus. During August 2011–July 2013, a total of 289 (96.0%) pediatric inpatient cases were genotyped. The number of pediatric inpatients increased from 32 during January–July 2012 to 200 cases during January–July 2013 (Figure 1). This increase was predominantly related to Ad7 infections, which were first detected in November 2012 and represented 48.5% (n = 97) of all genotyped adenovirus cases in the first 7 months of 2013. The increase in Ad7 pediatric inpatients was accompanied by a smaller increase in detection of subgroup B HAdV infections (n = 47) among military personnel, from September 2012 to July 2013; all patients recovered with outpatient treatment. Of the samples from military personnel, 35 (74.5%) were genotyped; all were Ad7. During September 2012–July 2013, of 19 HAdV cases among pediatric patients (<16 years of age) detected and genotyped by the community ILI surveillance, none were Ad7; of 17 HAdV cases identified among adults, 3 (17.6%) were Ad7. 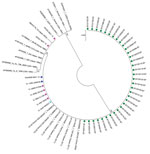 An abrupt increase in severe Ad7disease in pediatric inpatients in Singapore occurred during November 2012–July 2013. A corresponding rise was noted among military personnel during October 2012–April 2013, but no statistically significant increase in Ad7 infections was detected by the NPHL community ILI surveillance program. Partial hexon gene sequences of the Singapore isolates had 100% nucleotide identity with sequences reported from outbreaks in Taiwan and China (2,3,10).

Ad7 has been reported to cause outbreaks in 3 main patterns: 1) severe disease among young children, especially during winter in temperate countries; 2) less severe disease in nonseasonal community outbreaks; and 3) outbreaks among military personnel (11). The outbreak we report was marked by severe disease among young children and mild disease among military personnel. In the 2 government-owned hospitals, 1–2 cases among pediatric patients were identified per month by using community ILI surveillance. Failure to detect an increase in Ad7 remains unexplained but might be related to the low number of samples collected and tested.

Ad7 can be subclassified by restriction enzyme analysis (12). The available Singapore partial hexon gene sequences were most closely related to Ad7d and Ad7d2 genome types, which have been associated with outbreaks of acute respiratory illness in Asia. Ad7d, the predominant Ad7 circulating virus in China since the early 1980s, was the cause of outbreaks in South Korea during 1995–1997; during a community and pediatric outbreak in Taiwan in 2011, Ad7d replaced Ad7b as the main Ad7 strain (2,13). The closely related Ad7d2 was described in Israel in 1992 and has caused outbreaks in the United States and Japan (14,15). Systematic HAdV typing in Singapore was initiated in late 2011, so it remains unknown if Ad7 substrain replacement, specifically the circulating pediatric HAdV strain in early 2011, was a factor in the outbreak we report.

Our findings indicate a need for improved vigilance for detection and surveillance of severe Ad7 disease in Asia, as well as whole-genome sequencing and seroprevalence studies to perform accurate typing of outbreak strains and to identify correlates of pathogenicity. These practices could facilitate effective, early deployment of vaccine prevention and antiviral therapy.

We thank the staff of all participating institutions who contributed to patient care and data collection for this analysis.

This study was supported by the Transition Award (NMRC/TA/0009/2012) grant, the Singapore National University Health System H7N9 grant (NUHSRO/2013/144/H7N9/06), and the NHG Small Innovative Grant (SIG/14015). The funders had no role in study design, data collection and analysis, decision to publish, or preparation of the manuscript.