Three cases of influenza A(H10N8) virus infection in humans have been reported; 2 of these infected persons died. Characterization of the receptor binding pattern of H10 hemagglutinin from avian and human isolates showed that both interact weakly with human-like receptors and maintain strong affinity for avian-like receptors.

Human infections with avian influenza A(H10N8) virus were reported in China during the 2013–14 winter influenza season. The first patient, a 73-year old woman, became ill in November 2013 a few days after visiting a live poultry market in Jiangxi Province (1). Two additional patients, a 55-year-old woman and a 75-year-old man, were admitted to hospitals in the same province in January 2014 (2). Severe pneumonia and subsequent acute respiratory distress syndrome developed in all 3 patients; 2 of the patients died, 5 and 6 days after admission (2).

We analyzed the amino acid sequence of the receptor binding site of HA from the isolate A/Jiangxi-Donghu/346-1/2013 (H10-JD346; Global Initiative on Sharing Avian Influenza Data [GISAID, http://www.gisaid.org] accession no. EPI530526) from the first patient infected by influenza A(H10N8) virus. In addition, several human and avian influenza viruses (sequences from GISAID or the National Center for Biotechnology Information website) and a recent harbor seal isolate (5) were compared with H10-JD346 (Table). We observed that residues involved in receptor binding for H10 subtype influenza viruses suggest avian-like receptor specificity. However, we identified 2 amino acids in avian and human H10, T135 and S186, that are common in circulating human influenza viruses and were associated with changes in receptor binding in other avian influenza A virus subtypes (6,7). In accordance with this finding, Vachieri et al. found substantial levels of binding of an avian H10 HA to SAα2,6 that retained the ability to interact with SAα2,3 (8). 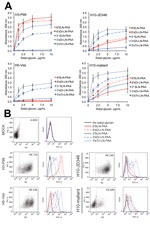 As expected, H3-P99 bound strongly to the SAα2,6 tested, and H5 showed higher levels of binding to SAα2,3 than to SAα2,6 (Figure 1, panel A). When we analyzed H10-mallard and H10-JD346, we found a similar binding profile, which is consistent with the presence of similar amino acids affecting the receptor binding specificity (Table). Although both H10 proteins had a prevalent avian-like binding profile, low levels of binding to SAα2,6 were also observed.

To confirm this data, we used a flow cytometry–based assay and the same synthetic glycans (9,10). We infected MDCK epithelial cells with H10-JD346 virus (6:2 re-assortant with the backbone of laboratory strain A/Puerto Rico/8/1934 [PR8], which was generated as described) (9,10); H10-mallard (wild-type); human isolate H3-P99 (wild-type); and H5-Viet 6:2 (low pathogenicity reassortant with the backbone of PR8) (9,10) at a multiplicity of infection of 1. Cells were harvested 24-h postinfection and incubated with antibody against matrix protein 2 (E10), which was detected by using an antibody against IgG (Alexa 647 antibody; Invitrogen, Carlsbad, CA, USA) as a control of infection and with the sialyl-glycans (detected with streptavidin–fluorescein isothiocyanate; Jackson Laboratories, Bar Harbor, ME, USA). We determined the percentage of infected cells in each sample and gated the infected population to determine the SA binding profile (Figure 1, panel B).

H3-P99 showed high levels of binding to SAα2,6 and H5-Viet bound more efficiently to SAα2,3 than to SAα2,6, which is similar to observations with recombinant HAs in the solid-phase binding assay. H10-mallard and H10-JD346 showed similar binding profiles with preferential binding for SAα2,3 and binding to SAα2,6 slightly higher than that for the negative control.

Analysis of receptor binding of H10-JD346 and of H10-mallard with 2 independent assays indicated that the H10 subtype influenza virus interacts slightly with human-like receptors and maintains preferential binding to avian-like receptors. Consequently, these data suggest that H10 subtype influenza virus might have the ability to interact with the upper human respiratory tract, which is rich in SAα2,6 (3).

Figure 3. Replication of influenza A(H10N8) H10-JD346 virus in human epithelial cells. A549 cells (a human lung epithelial adenocarcinoma cell line) were infected at a multiplicity of infection of 0.1 with the H10-JD346...

To test this hypothesis, we precomplexed H3-P99 and H10-JD346 with primary antibody (mouse anti-His tag) and secondary fluorescent antibody, then incubated the complex with 2 human tracheal samples (12). As expected, H3-P99 HA bound to the surface of respiratory epithelia (Figure 2). Recombinant H10-JD346 HA also interacted with respiratory epithelia (Figure 2), which suggested that the virus might be able to attach and replicate in the human upper respiratory tract. However, the 6:2 reassortant virus H10-JD346 virus showed markedly decreased replication compared with that of an H3N2 subtype virus (PR8 6:2 reassortant) in a human lung epithelial cell line (Figure 3).

HA of novel influenza A(H10N8) virus interacts with SAα2,3 and slightly with SAα2,6, at levels similar to that for an avian H10 subtype HA, and binds to cells in the human upper respiratory tract. Our findings are consistent with those of Vachiery et al. (8) but show some differences from those of Yang et al. (13) and Wang et al. (14), who did not detect interaction with SAα2,6 or human trachea. Variations in the experimental settings and protocols (e.g., concentration of HA or glycans used) might account for these dissimilarities.

Only 3 cases of human infections with influenza A(H10N8) viruses have been reported. However, H10N7 subtype viruses have caused conjunctivitis or mild respiratory symptoms in humans. An epidemic among seals caused by this virus subtype is currently ongoing in Europe (5). A study by Beare and Webster showed that ≈50% of volunteers experimentally infected with influenza A(H10N7) virus shed virus (15), which our data suggests might be caused by initial attachment to the upper respiratory tract. Immune responses were not detected in these volunteers, and mild, if any, symptoms developed, which indicated limited virus replication.

The low incidence of H10 influenza virus indicates a limited pandemic potential of H10N7 and H10N8 viruses. Therefore, further changes in receptor binding, as well as acquisition of genomic segments from other avian influenza virus strains through co-infection, would be required to increase fitness and transmissibility in mammals. Isolate H10-JD346 amino acid sequence had a mixture of E and K in position 627 of basic polymerase protein 2; the K627 mutation is associated with mammal adaptation (1). This finding highlights the need for an efficient surveillance network to track and identify possible changes, as well as extensive research to identify them and understand their functional consequences.

Dr. Ramos is an assistant professor in the Department of Microbiology at the Icahn School of Medicine at Mount Sinai, New York, NY. Her main research interests focus on receptors for influenza viruses and innate immunity to these viruses.

We thank CFG for providing reagents. Some of the data will be published on the CFG website (http://www.functionalglycomics.org/). We also thank the Flow Cytometry Shared Facility and the Microscopy Core Facility at Icahn School of Medicine at Mount Sinai for assistance, the Icahn School of Medicine Institutional Biorepository for providing human tissue sections, John Steel and Randy A. Albrecht for providing recombinant influenza viruses, and GISAID for making H10N7 and H10N8 subtype virus sequencing data publicly available.