We genetically characterized 32 canine rabies viruses isolated in Mali during 2006–2013 and identified 3 subgroups that belonged to the Africa 2 lineage. We also detected subgroup F rabies virus. This information should be useful for development of mass vaccination campaigns for dogs and eventual large-scale control programs in this country.

Rabies causes an estimated 70,000 human deaths annually worldwide, and >99% occur in developing countries, of which ≈43% occur in Africa, where rabies virus circulates in the dog population (1). A person bitten by a rabid dog, if not given postexposure prophylaxis, has an ≈5% (if bitten on the hand) to 70% (if bitten on the face) probability of showing development of clinical rabies (2). However, postexposure prophylaxis is often unavailable or unaffordable in many developing countries.

Numerous infectious diseases, including tuberculosis, malaria, dengue fever, and rabies, are present in Mali. The domestic dog is the major reservoir and vector of rabies in this country. Although disease surveillance is insufficient throughout Mali, the level of underreporting of rabies cases is unknown. Animal and human cases are recorded mainly in urban and suburban areas. Surveillance data reflect rabies mainly in Bamako (the capital of Mali; population 1.8 million), where rabies diagnostic testing is available.

A standard procedure is in place in Bamako for reporting of an animal bite. The bitten person should immediately contact the Division of Epidemiology, Prevention and Control of Diseases, which is part of the National Directorate of Health. Persons with suspected cases of rabies are referred to a specialized clinic (Lazaret Clinic) in Bamako. Dog owners are requested by the Division of Epidemiology, Prevention and Control of Diseases to bring their dogs to a veterinary clinic for a 15-day quarantine. Rabies diagnosis of suspect animals is made by the Central Veterinary Laboratory (CVL) in Bamako. A diagnosis of rabies in humans is based only on results of a clinical examination because of sociocultural reasons (3). In other cities in Mali, there are reference health centers, hospitals, and veterinary regional services for diagnosis (4).

During 2000–2013, samples from 468 animals showing clinical signs of rabies or to whom humans were exposed were submitted to the CVL for rabies testing by using the fluorescent antibody test (5). Of 468 animals analyzed, 447 (435 dogs, 4 cats, 4 cows, and 4 monkeys) showed positive results for rabies. Twenty-eight human cases of rabies were reported during 2007–2009 in Bamako, which indicated an incidence of 3.3 cases/1,000,000 persons/year despite 141 postexposure prophylaxis vaccinations/1,000,000 persons/year (4). Assuming a dog:human ratio in Bamako of 1:121, the annual incidence of rabies in dogs is ≈2.24 rabid dogs/1,000 dogs during the past 13 years, which is higher than that observed in N’Djaména, Chad (6), which borders Mali.

Four lineages (Africa 1–4) of rabies virus and several subgroups have been detected in Africa. All lineages include classical rabies virus species and vary by geographic area, virus evolution, and reservoir species (7,8). The most comprehensive study of western and central African rabies viruses included some isolates from Mali (7). The purpose of our study was to obtain more detailed information on genetic characteristics of rabies virus circulating in Mali and to clarify the geographic distribution and transboundary spread of this virus in the canine population in Mali.

Figure 1. Locations of origin for 100 specimens analyzed in this study (95 with positive results and 5 with negative results) submitted for rabies virus diagnosis, Mali, 2002–2013. Inst shows closer view of...

During 2002–2013, a total of 468 specimens were submitted from various regions in Mali to the CVL for rabies diagnosis (Figure 1). Samples were tested by using the fluorescent antibody test (5) and stored at −20°C for further analyses. We selected 100 samples (95 with positive results and 5 with negative results) for further testing on the basis of their geographic origin. 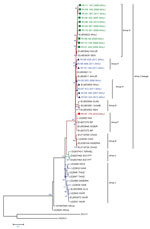 We analyzed phylogenetic relationships between 18 partial nucleoprotein gene sequences and 31 representative sequences of Africa lineages of rabies virus. This analysis (Technical Appendix Figure 1) showed that all samples that belonged to the Africa 2 lineage were widely distributed in western and central Africa (7), including Mali and neighboring countries (Mauritania, Guinea, Senegal, Niger, Nigeria, Côte d’Ivoire, and Burkina Faso).

Analysis of the nucleoprotein gene identified canine rabies subgroups G and H in Mali, as reported (7), and subgroup F, which was found throughout Burkina Faso and Niger (8). Subgroup G circulates in Mauritania, Burkina Faso, and Senegal. Subgroup H contains viruses from Mauritania, Mali, Burkina Faso, and Côte d’Ivoire. The RV57 isolate included in subgroup F was isolated from a rabid dog at the border with Niger in 2010. Strong nucleotide identity (99.6%) was shown between RV57 and the strain isolated in Niger in 2010 (Genbank accession no. EU853646).

We identified 3 subgroups of the Africa 2 lineage of rabies virus in Mali. The presence of subgroup F could be explained by the movement of rabid animals across country borders. Previous studies reported rabies virus transmission by human-mediated animal movements (13,14). The information we obtained in this study should be useful for development of mass vaccination campaigns for dogs and eventual large-scale control programs in this country.

Dr. Abdallah Traoré is a research scientist at the Central Veterinary Laboratory, Bamako, Mali. His primary research interest is diagnosis of viral diseases in livestock and poultry.

This study was supported by the European Union Seventh Framework Program (grant no. 221948, Integrated Control of Neglected Zoonoses) and the French Agency for Food, Environmental, and Occupational Health and Safety.