To assess the prevalence of malaria among illegal gold miners in the French Guiana rainforest, we screened 205 miners during May–June 2014. Malaria prevalence was 48.3%; 48.5% of cases were asymptomatic. Patients reported self-medication with artemisinin-based combination therapy. Risk for emergence and spread of artemisinin resistance among gold miners in the rainforest is high.

Malaria control programs on the Guiana Shield, a region of South America, are challenged by migrant populations looking for gold. Since 2008, the “Harpie” operation to control and reduce illegal gold mining activities has been conducted by French Armed Forces in French Guiana. Military deployments at illegal gold mining sites have resulted in several outbreaks and increased incidence of malaria in French forces (1–4), which suggests high transmission levels in those areas. Illegal gold mining sites are isolated places in the rainforest, far from health posts. The miners are usually hidden in the forest to avoid police controls, and they live in unsanitary conditions. 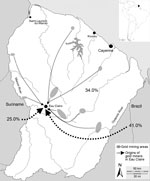 Figure 1. Origins of gold miners (N = 205) before they began to work in the illegal gold mining site of Eau Claire, French Guiana. Inset shows location of French Guiana in South...

Although formal health monitoring is not carried out in these communities, the effects of infectious diseases are of concern. In 2013, a group of 34 illegal gold miners with severe diarrheic and respiratory symptoms were evacuated by plane from a health post to the reference regional hospital in Cayenne. The outbreak was attributed to co-infection with several parasitic, bacterial, or viral agents: seasonal influenza A(H1N1)pdm09, Shigella flexnieri, Necator americanus, Leishmania spp., Streptococcus pneumoniae, and Plasmodium vivax (5). All patients came from the illegal gold mining site of Eau Claire (3°36′00′′N, 53°34′60′′W) (Figure 1). Given these problems, French health authorities decided to provide primary medical care in the field and also to assess the sanitary situation in Eau Claire. We describe the results of the cross-sectional study conducted to assess the epidemiologic situation of malaria.

Because of violence and insecure conditions at illegal mining sites, French military health services conducted the mission. Twelve soldiers and military policemen accompanied the medical team to ensure their protection but also that of the miners’ community. A primary care clinic and laboratory were set up under tents at the Eau Claire gold mining camp from May 28, 2014, through June 6, 2014. Active malaria screening was offered to every person who sought care for any reason.

Data were collected by physicians concerning each person’s recent medical history, protection measures against mosquito bites, use of medications, and recent travel inside or outside of French Guiana. Patient anonymity was stringently respected; every patient was issued a unique identification number. Only verbal consent could be obtained to avoid references that might reveal the identity of undocumented persons engaged in illegal activities.

Dried blood spots were obtained on filter paper by fingerstick and packaged in individual plastic bags with a desiccant until processing. Plasmodium DNA was extracted subsequently and tested with a nested PCR targeting P. falciparum and P. vivax 18S rRNA genes, according to the method of Snounou et al. (6). The propeller domain of pfK13 gene was sequenced in P. falciparum isolates (7). 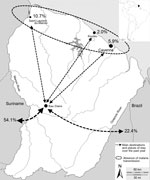 During the 10 days of field work, almost all inhabitants of the gold mining site sought medical care. The high prevalence of malaria and asymptomatic Plasmodium infections observed confirms that malaria is hyperendemic there (8). Because of the mobility of gold miners within French Guiana, malaria also could be highly prevalent among persons at other illegal gold mining sites where competent vectors exist (3). This hypothesis is strengthened by the recurrent malaria outbreaks experienced by French forces involved in operations to control illegal gold mining, particularly in the center of the region (3).

Systematic self-medication by patients using ACTs without following a full course of treatment is a serious risk for emergence of resistance to artemisinin and associated drugs (9). The high price of ACTs in the field (2 g gold) was the primary reason patients gave for not completing treatments. The mobility of gold miners raises 2 issues: the reintroduction of the disease in malaria-free areas (10) and the spread of antimalarial drug resistance if the disease emerges (11). In 2013, parasite persistence on day 3 after treatment with Coartem was described in Suriname, and most participants in that study had worked in gold mines in French Guiana (12,13). In Guyana, pfK13 C580Y mutants obtained from samples in 2010 were recently reported (14). These results may be viewed as ominous. Collaboration between countries of the Guiana Shield to control malaria among mobile populations is urgently needed (15).

We thank all military personnel from French Forces and French military health services who contributed to the study.

Dr. Pommier de Santi is a military physician and specialist in public health and epidemiology at the French Military Center for Epidemiology and Public Health, Marseille, France. In recent years, his work has focused on malaria and other tropical diseases affecting the French Armed Forces deployed in French Guiana.