Human hantavirus disease cases, caused by Puumala virus (PUUV), are mainly recorded in western and southern areas of Germany. This bank vole reservoir survey confirmed PUUV presence in these regions but its absence in northern and eastern regions. PUUV occurrence is associated with the presence of the Western bank vole phylogroup.

Puumala virus (PUUV) causes most hantavirus disease cases in Central and Western Europe and is the only human pathogenic hantavirus in Fennoscandia (1). The human infection is characterized by a mild-to-moderate form of hemorrhagic fever with renal syndrome designated nephropathia epidemica (NE), with a case fatality rate of <0.1%. The only virus reservoir in Central and Western Europe is the bank vole, Myodes glareolus (1).

Figure 1. Geographic distribution of Puumala virus (PUUV)–positive and PUUV-negative bank voles in Germany (A) and assignment of bank voles to the evolutionary lineages Western, Eastern, and Carpathian (B). The coloration of the...

PUUV causes most human hantavirus infections in Germany, with an incidence of 10.31 cases/100,000 inhabitants (2). Human disease reports fluctuate temporally with peaks in the years 2007, 2010, and 2012, but reports also show a heterogeneous spatial distribution (2,3). Generally and during outbreak years, the highest numbers of cases occurred in the western and southern parts of Germany, whereas in the northern and eastern parts of the country only a few cases were recorded (Figure 1, panel A).

Molecular analyses of bank voles from endemic regions detected the presence of PUUV at 30 sites in Germany (Figure 1, panel A) and resulted in the definition of several PUUV sublineages of the Central European (CE) clade (3,8). In addition, an 8-year monitoring study on the bank vole populations in a PUUV-endemic region of northwestern Germany indicated the long-term presence of particular PUUV strains (4).

To evaluate potential reasons for the almost total absence of human PUUV infections in northern and eastern Germany, we investigated bank voles from these regions and from PUUV-endemic regions in the western and southern parts of Germany for the presence of PUUV and typed the voles to major evolutionary lineages on the basis of cytochrome b gene sequences.

First, serologic investigation of 1,758 chest cavity lavage samples indicated 99 seropositive voles exclusively originating from the endemic regions in southern and western Germany (Figure 1, panel A; Technical Appendix Table). This analysis failed to detect any antibody-positive animals within the 1,210 bank voles of this panel originating from the eastern and northern parts of Germany.

Subsequent conventional PUUV RT-PCR analysis of RNA samples from 440 voles (comprising 86 seropositive and 334 seronegative voles, 9 with equivocal results, and 11 not investigated because of the lack of chest cavity lavage samples) revealed 79 positive and 361 negative samples (Technical Appendix Table). All RT-PCR–positive samples again only originated from the PUUV-endemic regions. A final real-time RT-PCR investigation of 364 RNA samples, 34 being positive and 329 being negative by conventional RT-PCR, confirmed the results of the conventional RT-PCR analysis.

Including results of previously published studies (3,4,7), PUUV seroprevalence in the endemic regions showed an average of 23.9% and varied between 4.6% and 66.7% (Technical Appendix Table). According to the serologic and RT-PCR data, a PUUV-endemic region can be identified spanning the western and southern parts of Germany (Figure 1, panel A, below the dotted red line). In this study, the easternmost PUUV-positive sites were located in Saxony-Anhalt (site 97), Lower Saxony (site 60), and Thuringia (site 100) (7). The northernmost sites were located in Lower Saxony (sites 57 and 60) and Saxony-Anhalt (site 97). Nucleotide sequence determination and subsequent phylogenetic analysis showed that all PUUV sequences belong to the CE PUUV clade, which is divergent from other European PUUV lineages (Technical Appendix Figure).

To test for a potential association between PUUV distribution in the reservoir and evolutionary bank vole lineages, we isolated mitochondrial DNA from 383 selected voles by using the GeneMATRIX Tissue DNA Purification Kit (Roboklon, Potsdam, Germany) according to manufacturer’s guidelines. The cytochrome b PCR was performed and used for determination of the bank vole evolutionary lineages as described previously (12). 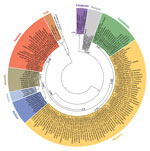 Figure 2. Phylogenetic relationships of European bank vole lineages. Sequences are categorized on the basis of mitochondrial cytochrome b gene sequences and shown as a maximum clade credibility phylogenetic tree with posterior probabilities...

The cytochrome b–based typing revealed the presence of the bank vole Western, Eastern, and Carpathian evolutionary lineages (Figure 2). Most of the territory of Germany was inhabited by the Western evolutionary lineage, with its northern and eastern borders located close to the Elbe River (Figure 1, panel B). The distribution of the Eastern lineage ranged over almost the entire northern part of Germany, with partial sympatric occurrence of the Carpathian lineage in the northeast (sites 34, 68, 77) and the Western lineage in the central and northwest (sites 41, 52, 53, 57, 93, 97, 98). The Carpathian lineage was additionally located in the southeastern part of Germany (sites 28–30).

The occurrence of PUUV in Germany (and Belgium and France) is preferentially associated with the presence of the Western evolutionary lineage of the bank vole, but the virus was also detected in sympatric animals of the Eastern or Carpathian lineage. Future studies will have to determine if the current distribution of PUUV can be explained by the postglacial colonization of Germany by bank voles of the Western evolutionary lineage from western refugia through southern Germany (13–15).

Dr. Drewes is currently a postdoctoral researcher at the Friedrich-Loeffler-Institut in Greifswald-Insel Riems, Germany. His research interests include epidemiology and molecular evolution of hantaviruses in association with their corresponding hosts.

We kindly acknowledge Konrad Wanka, Dörte Kaufmann, Anke Mandelkow, and Marie Luisa Schmidt for their excellent assistance, our numerous collaborators within the network Rodent-borne Pathogens and Arbeitskreis Mäuse im Forst for providing bank vole samples, our colleagues involved in dissection and sample analyses, Patrick Wysocki and Nicole Neumann for creating Figure 1, and Daniela Reil for the provision of unpublished data. Collection of samples in Baden-Wuerttemberg, North Rhine-Westphalia, Thuringia, and Mecklenburg-Western Pomerania (permits 35-9185.82/0261, 8.87-51.05.20.09.210, 22-2684-04-15-107/09, 7221.3-030/09) were done in the frame of UFOPLAN project 370941401.