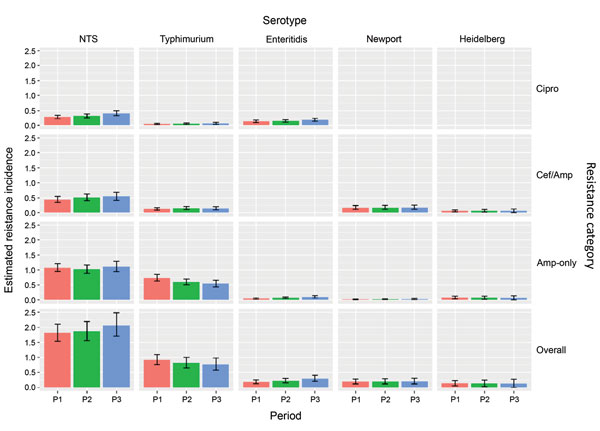 Figure 3. Estimated incidence of NTS infections with clinically important resistance (no. infections/100,000 person-years), by period, serotype, and resistance category, United States, 2004–2012. Estimates were derived by using Bayesian hierarchical models. All NTS includes the 4 major and other serotypes. Three mutually exclusive resistance categories were defined. Isolates in each category may have resistance to other agents. Data on Cipro among Newport (8 isolates), Cipro among Heidelberg (7), and Cef/Amp among Enteritidis (2) were too sparse to use in the Bayesian hierarchical models. Overall resistance was defined as Cipro, Cef/Amp, or Amp-only. Data were grouped into 3 periods (P): 2004–2006 (P1), 2007–2009 (P2), and 2010–2012 (P3). Error bars indicate 95% credible intervals. Amp-only, resistant to ampicillin (MIC >32 μg/mL) but susceptible to ceftriaxone and ciprofloxacin; Cef/Amp, resistant to ceftriaxone (MIC >4 μg/mL) and ampicillin; Cipro, nonsusceptible to ciprofloxacin (MIC >0.12 μg /mL) but susceptible to ceftriaxone; NTS, nontyphoidal Salmonella; P, period.