Since 1996, highly pathogenic avian influenza (HPAI) A viruses of the A/goose/Guangdong/1/96 lineage have caused major losses in the poultry industry worldwide and ≈800 confirmed human cases with a mortality rate of ≈50% (1,2). Wild waterbirds, the natural reservoir of low pathogenicity avian influenza viruses, are probably involved in long-distance spread of HPAI viruses (3,4).

In May–June 2016, a novel reassortant of HPAI virus subtype H5N8 clade 2.3.4.4a was detected in diseased waterbirds in China (5) and on the border between Russia and Mongolia (6). In October 2016, a similar H5N8 strain was found in a dead mute swan (Cygnus olor) in Hungary (7). H5N8 viruses then spread rapidly across Europe, causing widespread death among wild waterbirds (8).

To quantify deaths among species groups with known susceptibility (4,11) or that tested positive for H5N8 during the outbreak, we assembled daily mortality data from organizations gathering death reports or removing carcasses in the Netherlands during November 2016–January 2017 (Technical Appendix 1 Table 1). This collection was facilitated by close cooperation between ornithologists, virologists, animal health organizations, and other organizations involved in managing the H5N8 outbreak. After potential double-counts were excluded as much as possible, ≈13,600 wild birds of 71 species were reported dead (Table); 49% of all carcasses were identified by species, most of which were tufted duck (Aythya fuligula [39%]) and Eurasian wigeon (Anas penelope [37%]). Unidentified waterbird carcasses probably also mostly represented these species. H5N8 infection was confirmed in 21 species and not detected among the low numbers of sampled birds representing 13 other species (Technical Appendix 1 Table 2). 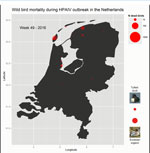 Because these data are based on numbers of reported carcasses, they provide an underestimation of actual deaths. Although carcass detection rates during daily searches at Gouwzee and Wolderwijd were estimated to be 90%–95% (C. Oshaar, pers. comm., June 12, 2017), search efficiency was probably much lower at other outbreak hotspots. Collection rates of waterbird carcasses during typical avian botulism outbreaks are 10%–25% (12), suggesting that the number of carcasses reported during this H5N8 outbreak represented a limited proportion of total deaths.

We screened a relatively small proportion of carcasses for HPAI virus by real-time reverse transcription on tracheal and cloacal swab samples. We then determined pathogenicity and N-subtype by sequencing, as previously described (9,13). Testing confirmed H5N8 infection in a large proportion of sampled tufted ducks, Eurasian wigeons, gulls, raptors, and corvids (Table); another HPAI virus subtype was detected only twice (H5N5 in tufted duck and mute swan).

We used the public science database of Sovon (Dutch Center for Field Ornithology, Nijmegen, the Netherlands) to compare the number of deaths per species group during November 2016–January 2017 with those occurring in the same timeframe from 2010–2011 to 2015–2016 (Figure 2). Death counts among diving ducks (including tufted ducks) were >2,000 times higher than average during November 2016–January 2017, and the relative prevalence of deaths substantially increased (4–177 times) for dabbling ducks, herons, geese, swans, and corvids. The same analysis based on another database (http://www.waarneming.nl) yielded similar results (Technical Appendix 2 Figure).

The first H5N8 outbreak among poultry in the Netherlands occurred on November 25, two weeks after the first detection in wild waterbirds and coinciding with increasing death reports in Eurasian wigeons. This time lag might be related to the limited mobility of wintering Aythya ducks, which, in contrast to Eurasian wigeons, rarely fly over land between foraging and roosting sites. Wild bird ecology might thus affect infection risk among poultry, which was further explored by researchers using network analyses of virus sequences obtained from wild birds and poultry during the same outbreak (14).

The quality of reporting of wild bird deaths during this H5N8 outbreak was vastly improved compared with earlier outbreaks, when species names, death rates, and spatiotemporal patterns of deaths were rarely recorded. However, documentation and management of future outbreaks in wild birds can be further improved. To contain outbreaks and minimize losses in the poultry sector, early HPAI virus detection in wild birds is crucial. Monitoring of wild bird deaths can be optimized (e.g., by timely investigation at sites where migratory birds first arrive, especially when surrounding countries report outbreaks). Awareness of clinical signs in wild birds (Technical Appendix 2) might facilitate this effort. Detailed, real-time, active and passive surveillance during outbreaks might help assess acute risk for infection in poultry. Such surveillance would require central coordination of information exchange during outbreaks, which would also facilitate evaluation afterward.

Readily available specific guidelines would help management of HPAI virus outbreaks in wild birds. National HPAI preparedness plans should include specific protocols about how to handle carcasses (e.g., biosafety and disposal instructions) and what to report (e.g., species, number of birds, demographic parameters, and presence of leg bands). Moreover, sufficient resources should be available for adequate sampling and testing of specimens to rule out other diseases and to track virus dynamics during an outbreak.

Our findings indicate that the 2016–2017 H5N8 outbreaks in the Netherlands were associated with unprecedented high HPAI-related mortality rates in a wide range of wild bird species. These latest H5N8 outbreaks have shifted the paradigm of wild birds as unaffected agents of HPAI viruses, with increasing concerns about potential effects on their populations. The Netherlands and other important staging areas for migratory waterbirds across Eurasia that have been affected by the 2016–2017 H5N8 outbreaks (3,15) are at risk for substantial numbers of bird deaths during future HPAI outbreaks. International responsibilities regarding migratory bird populations should stimulate national authorities to avert HPAI outbreaks not only in poultry and humans but also in wild birds.

Dr. Kleyheeg is a postdoctoral researcher at the Max Planck Institute for Ornithology, Radolfzell am Bodensee, Germany. His primary research interest is the relation between bird movement and the spread of pathogenic and nonpathogenic organisms.

Financial support for this study was provided by the Dutch Ministry of Economic Affairs and the US National Health Institute’s National Institute of Allergy and Infectious Diseases (contract no. HHSN272201400008C).