Four types of influenza viruses (A–D) have been confirmed (https://www.cdc.gov/flu/about/viruses/types.htm). The recently discovered influenza D virus is thought to cause respiratory diseases primarily in cattle and to a lesser extent in pigs (1–4). Moreover, serologic evidence for influenza D virus infection in small ruminants and humans has been established (5,6). Since the initial influenza D virus isolation in the United States in 2011 (1), the virus has been reported in China, Mexico, France, Italy, and Japan (7–11). Genetic analysis of the hemagglutinin-esterase-fusion gene demonstrated that these viruses had 2 distinct lineages, represented by D/OK and D/660 (12). Recently, a novel influenza D virus that emerged in Japan has been proposed as the third lineage (11). D/OK lineage–related viruses were previously identified in native Luxi yellow cattle in Shandong Province, northern China (7). Despite good progress in identifying domestic cattle as the primary reservoir of influenza D virus, we know little about prevalence in other animals. We conducted a study to clarify the origin and transmission dynamics of influenza D virus in goats, buffalo, and pigs as well as farmed cattle. 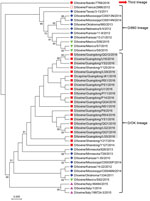 Sequence alignment analysis showed that the nucleotide sequences of influenza D viruses found in this study shared high similarity (99%–100%) with previously described sequences from China (7) and low similarity (93.8%–98.8%) with sequences originating from the United States, France, Italy, Mexico, and Japan (1,8–12). Similarly, phylogenetic analysis revealed that all influenza D virus sequences in this study clustered together with previous sequences from China and belonged to the D/OK lineage (Figure 2).

When first discovered, influenza D virus was reported in diseased pigs in the United States (1). Later, it was identified in cattle and swine herds in several other countries, with or without clinical manifestation (7–11). Moreover, antibodies to influenza D virus were detected in goats, sheep, and humans (5–6). Under experimental conditions, influenza D virus replicated and transmitted among ferrets and guinea pigs (13). We confirmed that influenza D virus is widely present in cattle species (dairy cattle, yellow cattle, and buffalo). We also found influenza D virus at a high prevalence (>30%) in pigs and goats (Table), which is in contrast to the low prevalence found in previous investigations (1,5,10). The high prevalence may be caused by poor biosecurity measures and high-density feeding mode practices in China’s animal industry as well as possible cross-species transmission (13). Taken together, our findings expand the host range of influenza D virus and further emphasize the health concern this virus poses to multiple animal species.

Previous studies have shown that influenza D viruses are mainly found in respiratory tract samples (1–4,7,9–12) and that they have played an etiologic role in bovine respiratory diseases (2–4). In this study, we found that influenza D virus RNA was present in cattle and goat serum samples; it was also present in goat rectal swabs, accompanied by peste des petits ruminants virus and caprine kobuvirus (data not shown). The distribution of influenza D virus in our study is not the same as that described under experimental conditions (3).

Influenza viremia, an indicator of disease severity (14), has been detected in 20.9% of severe cases during the acute phase of infection or before host death. Our detection of influenza D virus genome in serum samples from severely diseased animals (Table) implies that the virus could enter transiently into the animal’s circulatory system through capillaries lining the respiratory tract, which further contributes to the possibility of detecting virus in other organs. Similar to previous studies (2,4), we also found that the reverse transcription PCR positive rate was significantly higher (4%–40%) in diseased animals than the rate (<2%) observed in asymptomatic animals (p<0.05), which suggests a potential correlation between the disease severity and presence of influenza D virus. For influenza D virus found in rectal swabs, it might be that animals have swallowed the virus. Another possibility is that, similar to influenza A and B viruses, influenza D virus can replicate within the intestinal tract (15).

To date, 2 lineages of influenza D virus (D/OK and D/660) co-circulate in North America and Europe (8–10,12). However, only the D/OK lineage has been found in China, and a potential third lineage was found in Japan (7,11). Our study confirms and further extends the previous observation that D/OK lineage circulates in East Asia. The viral, host, and ecologic factors that shape the observed contrasting phylodynamics of influenza D viruses among different geographic regions warrant further investigation.

In addition, we found different minor genetic variants circulating on the same farm (Figure 2), indicating the ongoing evolution of influenza D viruses in their hosts (7,8,11). In comparing our sequences to the reference sequences from different animal species, we found 4 frequent nucleotide mutations (at positions 136, 231, 263, and 486) (online Technical Appendix Figure 1), which caused 2 amino acid mutations at positions 77 and 88 (online Technical Appendix Figure 2). Interestingly, among 4 nucleotide mutations, 1 unique nucleotide (T at position 486) was originally from the D/660 lineage. Moreover, we found several consistent sequences co-circulating in multiple animal species (online Technical Appendix Figure 1). Our speculation is that homologous recombination among different influenza D viruses and potential cross-species transmission under field conditions are possible, but further study is needed.

In summary, our study investigating the infection status of influenza D virus in different farmed animal species in Guangdong Province provides novel insights into the epidemiology and evolution of this virus. In particular, we document the molecular evidence for influenza D virus infection in goats and buffalo.

Dr. Zhai is an associate professor at Animal Disease Diagnostic Center, Institute of Animal Health, Guangdong Academy of Agricultural Sciences. His research interests focus on surveillance and rapid response research of emerging or reemerging animal pathogens. In 2016–17, he is a visiting scholar at the Department of Biology and Microbiology, South Dakota State University.

We are very grateful to Ben M. Hause, Milton Thomas, and Hunter Nedland for their suggestions and English editing when we revised this manuscript.