Highly pathogenic influenza A(H7N9) virus has infected humans every influenza season since 2013; the fifth epidemic wave occurred during the 2016‒17 season (1,2). Since 2013, a total of 1,565 laboratory-confirmed human cases and 612 related deaths have been reported (http://www.who.int/influenza/human_animal_interface/Influenza_Summary_IRA_HA_interface_12_07_2017.pdf?ua = 1). During the fifth wave, H7N9 viruses possessing hemagglutinin with multibasic amino acids at the cleavage site were isolated from birds and humans (2–4). H7N9 isolates from humans possessed hemagglutinin with a preference for human-type receptors and neuraminidase with inhibitor resistance (4,5); one of those isolates transmitted among ferrets via respiratory droplets (6). Emergence of highly pathogenic H7N9 viruses with such properties is a serious threat to public health. Full comprehension of the extent of this threat requires detailed characterization of these viruses.

We attempted to identify the replication-enhancing amino acids in the polymerase complex of H7N9 virus A/Guangdong/17SF003/2016 (GD), which was isolated from the first reported H7N9-infected patient (3,5) and harbors polymerase basic (PB) 2 with 271T, 588V, 591Q, 627E, and 701D. Amino acids at these positions are known to alter viral polymerase activity in mammalian and avian cells at different temperatures (7–11).

To examine the role of these amino acids on virus growth in human cells, we prepared wild-type and mutant viruses in the GD background by using reverse genetics. GD/PB2-482K and GD/PB2-588A viruses replicated less efficiently than wild-type GD virus in A549 cells (Technical Appendix Figure 2, panels A, B). Replication of GD/PB2-482K-588A and GD/PB2-482K-588A+PA-497K viruses was less efficient than that of GD/PB2-482K and GD/PB2-588A viruses. GD/PA-497K virus showed growth comparable to that of the wild-type GD virus. In DF-1 cells, all tested viruses produced similar growth curves (Technical Appendix Figure 2, panel C). These results indicate that PB2-482R and PB2-588V play a central role in enhancing virus replication in mammalian cells.

To assess the role of these amino acids in vivo, we compared virus titers in the lungs, nasal turbinates, and brains of mice infected intranasally with 102 PFU of each virus. On day 3 after infection, we did not detect GD/PB2-482K, GD/PB2-482K-588A, or GD/PB2-482K-588A+PA-497K viruses in the lungs or turbinates (Table 2). Replication of GD/PB2-588A or GD/PA-497K virus was significantly decreased in the lungs and slightly decreased in the turbinates. On day 6 after infection, we found similar trends to those observed on day 3. Wild-type GD virus was detected in the brain of 1 of 3 mice. 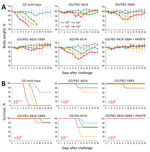 PB2-482R was located in 1 of 2 nuclear localization signals spanning amino acids 449 to 495 (13) within the cap-binding domain of the influenza A virus polymerase complex (Technical Appendix Figure 3, panel B). PB2-588V was located near PB2-627K in the 627 domain. PA-497R was located at 1 of 2 binding sites for transcriptional activator hCLE (14) but was not exposed on the protein surface. PB2-588V is probably involved in ANP32A-dependent high polymerase activity in mammalian hosts (15), and the role of PB2-482R might differ from that of other polymerase-enhancing amino acids in PB2.

Dr. Yamayoshi is project associate professor of Division of Virology, Institute of Medical Science, University of Tokyo. His research interests are virus–host interactions at the community, individual, cellular, and molecular levels.

We thank Kohei Oishi for assistance with experiments and Susan Watson for editing the manuscript.

This work was supported by the Japan Initiative for Global Research Network on Infectious Diseases from the Japan Agency for Medical Research and Development (AMED); Leading Advanced Projects for Medical Innovation from AMED; the e-ASIA Joint Research Program from AMED; a Grant-in-Aid for Scientific Research on Innovative Areas from the Ministry of Education, Culture, Science, Sports, and Technology of Japan (nos. 16H06429, 16K21723, and 16H06434); and the Center for Research on Influenza Pathogenesis funded by US National Institutes of Health, National Institute of Allergy and Infectious Diseases contract no. HHSN272201400008C.