An outbreak of trichinellosis occurred in Japan in December 2016. All case-patients had eaten undercooked bear meat, from which Trichinella larvae were subsequently isolated. DNA sequencing analysis of the mitochondrial genes cytochrome c-oxidase subunit 1 and internal transcribed spacer 2 confirmed that Trichinella T9 had caused the outbreak.

Trichinellosis is a parasitic disease caused by the Trichinella spp. nematode that is contracted by eating raw or undercooked meat from infected animals. Approximately 100 species of animals, including humans, can be infected (1). The most common source of human trichinellosis is meat from pigs or wild boar. A total of 65,818 human cases were reported from 41 countries during 1986–2009 (2).

In Japan, trichinellosis is rarely encountered in the clinical setting, and only 5 imported cases (1 in 1998 [3], 1 in 1999 [4], 1 in 2003 [5], 2 in 2009 [6]) have been reported during the past few decades. Three outbreaks of domestically acquired trichinellosis have been reported since 1975 (7), the last reported outbreak occurring in 1981; all were associated with bear meat consumption, but the etiologic agents were not identified at the species level. Since then, no outbreaks were reported until late 2016.

Figure 1. Bear meat dish implicated in an outbreak of Trichinella T9 infection, Japan, December 2016. Bear meat slices are marked with a circle and an arrow.

In December 2016, a previously healthy young man was referred to Tsukuba Medical Center Hospital (Tsukuba, Ibaraki Prefecture, Japan) for a fever, rash, malaise, and eosinophilia. He claimed that he had eaten a bear meat dish (Figure 1) at a restaurant in Mito, Ibaraki Prefecture, Japan, with his 4 friends, who all had similar signs and symptoms. Subsequently, a total of 32 patients who had consumed the bear meat were reported to the Ibaraki Prefecture Mito Health Center; 28 patients had been evaluated at hospitals. Ethics approval for this research was obtained from the Institutional Review Board of Mito Kyodo General Hospital, University of Tsukuba, Mito, Japan (No. 16-69). All patients provided informed consent for their data to be included in this study.

In total, 19 (90.4%) patients, all symptomatic, had an antibody titer higher than the cutoff (Table 1); 2 symptomatic patients had an antibody titer lower than the cutoff (titer <200 on convalescent serologic evaluations). All 7 asymptomatic patients had negative serologic test results. Consequently, we identified 21 trichinellosis patients in our study, representing 19 confirmed and 2 probable cases. 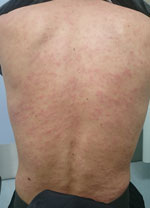 Figure 2. Rash on the back of a patient (patient 10 in Table 1) with confirmed Trichinella T9 infection associated with consumption of bear meat, Japan, December 2016. Patient had...

At the time of initial evaluation, the median eosinophil count was 1.0 × 109/L (range 0.1 × 109/L to 4.3 × 109/L), and the median creatine kinase level was 147 IU/L (range 57–786 IU/L). All patients were treated with albendazole (200 mg or 400 mg, 2×/d for 10–14 days), with or without prednisolone. In 1 case, albendazole was changed to mebendazole because of a mild increase in the patient’s aspartate aminotransferase and alanine aminotransferase levels, which was later considered to have occurred because of trichinellosis itself. None of the patients had serious complications of trichinellosis or major adverse events during treatment.

The bear meat came from a brown bear (Ursus arctos) that had been hunted in Hokkaido Prefecture in November 2016. The meat had been divided into 3 blocks that were preserved in cold storage. Two of these blocks were eaten during this outbreak. The first bear meat block was brought into a restaurant in Mito. In late November, it was seared and served in thin slices with herbs (Figure 1; Technical Appendix Figure). This bear meat was kept in cold storage and served for 2 days, after which it was preserved in a freezer. The temperature of the cold storage and the freezer were not recorded. Japan Industrial Standard (JIS B 8630) defines the temperature of refrigerated storage as not below 0°C and freezing as <–20°C. The bear meat was served after being reheated for a few minutes. The second bear meat block was cooked steak-style to a medium-rare condition; 1 of the patients had eaten meat from this block (online Technical Appendix Figure). The third bear meat block was stored in a freezer without being consumed. We used this meat for the analysis of Trichinella spp., which was performed at the National Institute of Infectious Diseases (Tokyo, Japan).

We artificially digested the bear meat with 0.5% pepsin-0.8% HCl solution and then performed a microscopic examination on the sediment. We detected encapsulated larvae with a distinctive esophageal structure (stichosome). The density of the larvae was 84 larvae/g. For the molecular identification of the larvae, we amplified cytochrome c-oxidase subunit 1 (cox1) and internal transcribed spacer 2 (ITS2) by using PCR with primer pairs described by Kanai et al. (9). A subsequent sequence analysis showed that both sequences (GenBank accession nos. LS361217 for cox1 and LS361216 for ITS2) were identical to the corresponding sequences of Trichinella T9 (GenBank accession nos. KM357420 for cox1 and AB255886 for ITS2).

Nine species (T. spiralis, T. britovi, T. nativa, T. nelsoni, T. murrelli, T. zimbabwensis, T. papuae, T. pseudospiralis, T. patagoniensis) and 3 unclassified genotypes (T6, T8, and T9) are currently recognized in the genus Trichinella (10). Among them, T. spiralis is the most common species in the world (11). The taxonomic status of Trichinella species in Japan has not yet been fully elucidated. A recent molecular study revealed that the Trichinella isolates obtained from animal specimens in Japan included Trichinella T9 (12) and T. nativa (13), but T. spiralis has not yet been found in Japan (9). Trichinella T9 has only been reported in Japan. Therefore, it is considered to be native to Japan. Trichinella T9 has been detected and confirmed in a brown bear (13), raccoons (14), raccoon dogs (13,14), and red foxes (13), but no cases of human infection have been reported.

In this outbreak, 2 symptomatic patients and 7 asymptomatic patients had negative serologic test results. A second blood specimen was collected from these patients 33–56 days after the consumption of the bear meat. According to the pertinent literature data (15), serum conversion has been observed up to 65 days postinfection. Thus, we need to consider the possibility of a delay in serum conversion for these 9 patients.

We describe an outbreak of trichinellosis that occurred because of the consumption of bear meat infected with Trichinella T9. Public awareness should be raised and education should be promoted to prevent further outbreaks of trichinellosis in Japan.