We evaluated genetic variation in Middle East respiratory syndrome coronavirus (MERS-CoV) imported to South Korea in 2018 using specimens from a patient and isolates from infected Caco-2 cells. The MERS-CoV strain in this study was genetically similar to a strain isolated in Riyadh, Saudi Arabia, in 2017.

The 2015 MERS-CoV outbreak in South Korea resulted in 186 laboratory-confirmed cases and 38 deaths. MERS-CoV spread via intrahospital and interhospital transmission at 16 clinics and hospitals across South Korea (2). This outbreak was recorded as the largest MERS outbreak outside of the Middle East (3).

In August 2018, eight laboratory-confirmed cases of MERS-CoV infection were reported in Saudi Arabia, with 4 associated deaths; 1 case in a person who had travel history to the Arabian Peninsula was reported in the United Kingdom (4). In September 2018, a man in South Korea with a history of travel to the Middle East became ill and was suspected of having MERS-CoV infection. We report the investigation of this case and genetic characterization of the virus on the basis of variation and phylogenetic analyses of the spike (S) gene and the full-length genome from patient specimens and isolates from Caco-2 cells.

On September 7, 2018, a 61-year-old man who had moved from Kuwait to South Korea visited the hospital with diarrhea and fever (5). The patient had a history of visiting the Middle East and was suspected of MERS-CoV infection; accordingly, he was transferred to a hospital with a national isolation ward.

On September 8, we collected nasopharyngeal swab and sputum samples from the patient and transported them to the Seoul Provincial Institute of Public Health and Environment (Seoul, South Korea). Real-time reverse transcription PCR showed that the sputum was positive for the upstream regions of the E protein (upE) and orf1a genes (6). Later the same day, we collected nasopharyngeal swab, throat swab, and sputum samples from the patient for further confirmation. The Korea Centers for Disease Control and Prevention (KCDC) confirmed that throat swabs and sputum samples were positive for upE and orf1a.

We added throat swab and sputum samples from the patient to a monolayer of Caco-2, Huh 7, and Vero E6 cells, which we incubated at 37°C in 5% CO2. We observed a cytopathic effect on the third day after inoculation in Caco-2 cells and confirmed viral replication of MERS-CoV in the supernatant of the infected cells by real-time reverse transcription PCR. 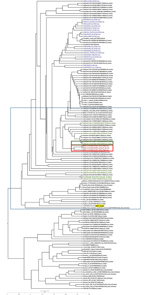 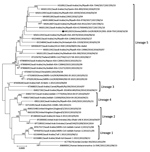 We used ClustalW (http://www.clustal.org) to align the S gene sequences of the isolates from the patient, MERS-CoV/KOR/KCDC/001_2018/SP-1 (from sputum sample), TS-1 (from throat swab sample), and TSVi (from Caco-2 processing), with those of 157 other MERS-CoV strains from GenBank and the MERS-CoV sequence database (https://www.ncbi.nlm.nih.gov/genomes/VirusVariation/Database/nph-select.cgi?cmd=database&taxid=1335626), deposited up to August 2018. We sequenced and analyzed the full-length genome of MERS-CoV/KOR/KCDC/001_2018/TSVi and 39 other MERS-CoV strains. We constructed phylogenetic trees by the maximum-likelihood method with 1,000 bootstrap replicates using MEGA7 (7) and RAxML (https://github.com/stamatak/standard-RAxML). We constructed phylogenetic trees from the MERS-CoV S genes (4,062 bp) (Figure 1) and the full-length genome (30,150 bp) of the virus (Figure 2) obtained from the patient in this study and the most similar human MERS-CoV sequences from other countries (4).

We characterized the S gene and full-length genome of MERS-CoV imported to South Korea from the Middle East using sputum and throat swab specimens from a patient and from Caco-2 cells exposed to throat swab samples from the patient (8,9). A comparative genetic analysis of 157 strains isolated in 27 countries including South Korea demonstrated that the imported MERS-CoV we isolated showed the highest identity (99.85%–99.90%) with a strain recently isolated in Saudi Arabia in 2017 (1,10). These strains differed at 2 positions (C309T and T519C). We detected no variation in NTD or RBD, which are the major functional sites of the S protein (11). In addition, the strains involved in the outbreak in South Korea in 2015 had 12 nt substitutions (NTD, 1 site; RBD, 2 or 3 sites), implying that the imported case in 2018 involved a different virus (4).

Despite 110 laboratory-confirmed cases of MERS-CoV reported globally during 2018, no genetic information has been obtained to date. Therefore, we could not compare the genetic relationships between the strain we isolated and MERS-CoV strains in the Middle East (12).

In summary, we obtained genetic information about a MERS-CoV strain in South Korea in 2018 that was probably imported from the Middle East. We expect the sequence data we identified to support future epidemiologic investigations of MERS-CoV, particularly to fill the need for recent data. Furthermore, the results of this study improve our understanding of the evolution of MERS-CoV and highlight the need for enhanced surveillance, especially for persons traveling to the Middle East.

Dr. Chung is a deputy director at the Division of Viral Diseases, Korea Centers for Disease Control and Prevention, Cheongju, South Korea. His research interests include the molecular characterization and pathogenesis of influenza and respiratory viruses.