Melioidosis is a neglected tropical disease with an estimated annual global mortality rate of 89,000 (1). Its cause is the gram-negative bacterium Burkholderia pseudomallei, which is found in environmental soil and water in Southeast Asia and northern Australia and is increasingly recognized across tropical regions (2). Known underlying risk factors that contribute to increased susceptibility to infection include diabetes, chronic kidney diseases, and alcohol abuse (3). The rapid expansion of type 2 diabetes, especially in low- and middle-income countries, is likely to exacerbate the situation further (4). In Thailand, B. pseudomallei is highly distributed in the environment in the northeast, where most of the country’s melioidosis cases have been reported (5). However, B. pseudomallei is also isolated from soil in the eastern and central parts of Thailand. A closely related species of minimal virulence, B. thailandensis, and a B. thailandensis variant (BTCV) expressing the B. pseudomallei–like capsular polysaccharide (CPS) are also present in the soil in Thailand (6). The genomic composition of B. thailandensis shows >85% similarity with B. pseudomallei (7). However, there are a few key differences, including the lack of virulence factors, such as capsular polysaccharide, and the presence of the arabinose assimilation operon (8) in B. thailandensis and BTCV. The hybrid BTCV exhibits several features found in B. pseudomallei, including resistance to decomposition by the complement system, intracellular survival inside macrophages, and colony morphology that resembles that of B. pseudomallei (9). Although BTCV has acquired B. pseudomallei–like CPS gene clusters, it has been shown to be nonpathogenic in mouse models (9).

Immune cross-protection conferred by B. thailandensis variants has been demonstrated in animal models (10). In particular, mice immunized with the BTCV isolate E555 showed superior cross-protection to that from the noncapsulated strain against a lethal dose of B. pseudomallei challenge, resulting in high CPS-specific IgG levels and decreased bacterial prevalence (10). To date, comprehensive immune cross-reactivity to B. thailandensis and BTCV has not been studied in humans.

Protective adaptive immunity in human melioidosis is complex, but defense against its intracellular pathogen is likely to require competent cellular immune responses largely mediated by T lymphocytes (11,12). Our team and others have shown that surviving melioidosis patients have elevated CD4 and CD8 T-cell–mediated interferon γ (IFN-γ) responses to B. pseudomallei compared with deceased case-patients (13,14). Along with key protective immunity conferred by cellular immune responses, humoral immunity against BP infection has been demonstrated to be a component of protection in rodent models (15), although antibody levels measured by indirect hemagluttination assay were not significantly associated with survival (p>0.05) in human patients after adjusting for other parameters (16). Our study aimed to characterize the relationship between the human B. pseudomallei–specific immune response and responses to B. thailandensis and BTCV. We evaluated humoral and cellular immune responses to B. pseudomallei, B. thailandensis, and BTCV in patients with acute melioidosis, in patients with other gram-negative bacterial infections, and in exposed populations in the endemic region with and without diabetes.

We prepared antigens in accordance with published methods, unless otherwise stated (17,18). For IHA, we used crude culture filtrate antigens from pooled isolates with the following specifications: B. pseudomallei Thai clinical isolates 199a and 207a (19), B. thailandensis Thai environmental isolates E264 (ATCC700388) and STBCC006 (20), and BTCV Thai environmental E555 and USA clinical isolate CDC3015869. We prepared B. thailandensis and BTCV antigens following a traditional IHA antigen preparation as described previously (17). For ELISA, we prepared whole-cell heat-killed antigens from B. pseudomallei Thai clinical isolate K96243, BT E264, and BTCV E555 as described previously (18). For IFN-γ ELISpot and whole-blood stimulation assay, we used a single culture filtrate antigen of each strain, B. pseudomallei 199a, B. thailandensis E264, and BTCV E555.

We determined serologic responses to B. pseudomallei, B. thailandensis, and BTCV by IHA, as well as IgM and IgG ELISA (18). We performed IHA as described previously (17), with an IHA titer of >1:80 considered positive (21).

We used a commercial IFN-γ ELISpot assay (Mabtech AB, https://www.mabtech.com) to quantify secreted IFN-γ from peripheral blood mononuclear cell (PBMC) in response to B. pseudomallei, B. thailandensis, and BTCV antigens as described previously (13). In brief, we added PBMC at a density of 2 × 105 cells per well to each of 2 antibody-coated plates and incubated them either in media only or in the presence of antigen for 18–20 h at 37°C: final concentration for B. pseudomallei was 88 µg/mL; for B. thailandensis, 78 µg/mL; for BTCV, 83 µg/mL; and for purified protein derivative (PPD), 20 µg/mL. We added 1 µg/mL of detector antibody and incubated for 3 h at room temperature, then for 2 h with streptavidin-conjugated ALP at room temperature. We used the AP Conjugate Substrate Kit (Bio-Rad, https://www.bio-rad.com) to develop spots for up to 20 min. We analyzed plates on the CTL ELISpot Reader (CTL Analyzers, http://www.immunospot.com) using the proprietary Smartcount automated settings. Results were reported as spot-forming units (SFU) per million PBMC. Background (PBMC in media only) responses in unstimulated control wells were typically <20 spots and were subtracted from those measured in antigen-stimulated wells. We used phytohemagglutinin (PHA) at a concentration of 10 μg/mL as a positive control.

For antigen stimulation, we added 500 μL heparinized blood to a 5 mL polystyrene round-bottom tube (Corning, https://www.corning.com) containing a final concentration of 1 μL/mL anti-human CD28 and CD49d (Becton Dickinson, https://www.bd.com), along with B. pseudomallei, B. thailandensis, or BTCV antigens, all at a final concentration of 1 mg/mL. We used staphylococcal enterotoxin B (SEB) at a final concentration of 10 µg/mL as positive control and RPMI medium supplemented with 10% fetal bovine serum (FBS) (R10 medium) as negative control. We incubated the tubes at 37°C, 5% CO2, 95% humidity. After 18 h, we added a final concentration of 10 μL/mL Brefeldin A (eBioscience, https://www.thermofisher.com) and incubated the assay for another 4–5 h under the same conditions. We then incubated samples with Live/Dead (LD) Fixable Near-IR Dead Cell Stain (Life Technologies, https://www.thermofisher.com) according to the manufacturer’s instructions, followed by a single 10-min incubation with FACS Lysing solution at room temperature for red cell removal (Becton Dickinson). We cryopreserved lysed blood cells in FBS with 10% dimethylsulfoxide (DMSO) (Sigma Aldrich, https://www.sigmaaldrich.com) and stored at −80°C until flow cytometry staining.

The outcomes of interest were correlation between level of immune responses (measured by IHA titers, optical density of IgM and IgG by ELISA and levels of cytokine-producing cells, and IFN-γ SFU) against 3 antigens: B. pseudomallei, B. thailandensis, and BTCV. We used Spearman’s correlation coefficient (ρ) to determine the correlation between the levels of immune responses against the 3 antigens. We compared ordinal and continuous variables using a nonparametric Mann-Whitney test (comparing 2 independent groups) and Wilcoxon matched-pairs signed rank test (comparing multiple tests on matched cases). We performed all statistical tests using GraphPad Prism version 7.0b for Mac OS X (GraphPad Software, https://www.graphpad.com).

We enrolled a total of 100 patients with culture-confirmed melioidosis during April 2016–November 2017 into the melioidosis cohort. We excluded 1 patient because of a positive concurrent diagnosis of tuberculosis. We recruited participants at a median of 5 days after admission (interquartile range [IQR] 4–6 days) (Table 2). Diabetes was an underlying condition for two thirds (67%) of the melioidosis cohort. The overall 28-day mortality rate was 30% (30/99), with no significant difference (p = 0.9) for patients with and without diabetes.

Humoral Immune Responses by IHA against B. pseudomallei, B. thailandensis, and BTCV

Humoral Immune Responses by IgG and IgM ELISA against B. pseudomallei, B. thailandensis, and BTCV 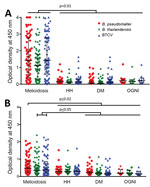 Figure 2. Human humoral immune responses to Burkholderia pseudomallei, B. thailandensis, and BCTV by IgG and IgM ELISAs, Thailand. IgG-specific (A) and IgM-specific (B) responses are shown for acute melioidosis patients (n =...

Interferon-γ ELISpot Responses to B. pseudomallei, B. thailandensis,and BTCV

Our results demonstrate that melioidosis patients show strong humoral and cellular cross-immunity between the pathogenic B. pseudomallei and the less pathogenic B. thailandensis and BTCV. On the other hand, the HH cohort and control cohorts in general had relatively low humoral immune responses to all 3 Burkholderia antigens but profound cellular immune responses. We showed that just over half of the acute melioidosis patients were positive by IHA; previous work in our group has shown that a significant proportion (12.6%) of melioidosis patients never seroconvert (16). We do not have enough information to confirm whether the persistence of seropositivity against B. pseudomallei in healthy persons is associated with latent infection or with successful clearance of B. pseudomallei after exposure events.

Cell-mediated immune responses by IFN-γ and type I immune responses (e.g., interleukin [IL] 12, IL-18, tumor necrosis factor α) are essential for the host immune system in fighting against intracellular infections (29–31). Nithichanon et al. showed that most of an exposed healthy population has acquired cellular immunity against broad immunogenic B. pseudomallei epitopes (32). Our IFN-γ ELISpot experiments suggest that both melioidosis patients and HH contacts engage strong cross-immune IFN-γ responses between B. pseudomallei, B. thailandensis, and BTCV, despite low humoral responses in the HH cohort. The IFN-γ responses predominantly from T cells during melioidosis are associated with protection and survival against B. pseudomallei infection (13). We demonstrate that IFN-γ responses to all 3 antigens are a mix of T and NK cell responses, with different contribution of T-cell subsets in the melioidosis cohort compared with the HH cohort. Whereas melioidosis patients predominantly exhibit CD4 T-cell IFN-γ responses, the HH cohort is characterized by a mix of double negative and CD4 T-cell responses and increased NK cell responses, suggesting an innate or innate-like driven immune response.

Low-dose exposure to B. pseudomallei in healthy persons may also contribute to immune responses. B. pseudomallei–specific cellular immunity in seronegative healthy participants showed detectable IFN-γ ELISpot responses in some subjects to virulent factors in B. pseudomallei, such as bopE (Type III secreted protein), pilO (Type IV pilus biosynthesis protein), and flgK (flagellar hook-associated protein) (12). Another possibility would be cross-reactivity to other gram-negative bacteria, as demonstrated by some OGNI participants exhibiting high IFN-γ responses to whole-cell heat-killed Burkholderia antigens (Figure 3).

In a previous study in this population, we demonstrated that acute melioidosis patients elicited strong cellular immune responses in both the CD4 and CD8 T-cell compartments (13). Cellular immune responses by CD4 T cells against B. pseudomallei antigen (AhpC) have been associated with survival (33). HIV positivity does not seem to be a major risk factor for melioidosis; a surge in melioidosis incidence and severity was not seen during the HIV epidemic in the 1990s in Thailand (34) although cases of tuberculosis and other opportunistic infections such as cryptococcal meningitis did increase. During this time, 2.8% (95% CI 0.8%–4.7%) of 286 patients in Ubon Ratchathani with B. pseudomallei tested positive for HIV, compared with 0.6%–1.1% of blood donors, but this difference was not significant (35). However, HIV infection is known to increase the risk for other gram-negative infections, such as Salmonella and Escherichia coli, and it is likely that a relationship between HIV and melioidosis could be demonstrated by sufficiently powered studies. To date, host immune responses by CD4 T cells in HIV-positive persons with melioidosis remain unknown. Host immune responses during acute melioidosis associated with survival have been shown to be dominated by CD8 T and NK cells (36,37), and some redundancy may occur to allow compensation of low CD4 counts in HIV.

Mr. Rongkard is doctoral candidate at the Centre for Tropical Medicine and Global Health, University of Oxford, Oxford, UK. His current research interests focus on the immunology of tropical infectious diseases, particularly melioidosis.

The authors declare no conflicts of interst.

P.R. was supported by a Master’s Fellowship in Public Health and Tropical Medicine by the Wellcome Trust (108395/Z/15/Z). S.J.D. is grateful for the support of a Wellcome Trust Intermediate Clinical Fellowship award (ref. WT100174/Z/12/Z).

1Preliminary results from this study were presented at the European Melioidosis Congress, March 19–21, 2018, Oxford, UK.