Hospital-acquired infections caused by multidrug-resistant (MDR) pathogens pose major challenges (1). Whereas the concept of transmission of pathogenic bacterial organisms through contact with medical staff is well established, other ways of spreading have not been sufficiently addressed. A tertiary care hospital in Germany observed sporadic outbreaks of MDR pathogens that could not be attributed to usual means of contamination. Concurrently, an increase in moth flies was observed.

Psychodidae, the family that encompasses moth flies, includes a few species that can cause severe health problems, including the species Psychoda alternata and Clogmia albipunctata. Both species occur in large numbers where poor hygienic conditions exist, such as in sewage treatment plants, hospital waste water systems, or other environments where microbial biofilms exists, and therefore are considered nuisance pests (2). Reports suggest that wounds attract adult moth flies (3) and larvae have even been reported in samples from tear ducts (3). C. albipunctata moth flies have become a severe source of insect infestations in hospitals. One report (4) provides a summary of the permanent distribution of the species throughout Europe.

Observations of both moth flies and outbreaks of MDR bacteria in the hospital were not initially linked. However, a newly constructed operating room (OR) could not be opened for use for ˃2 years due to occurrence of moth flies. The results of this study suggest that spreading of MDR bacteria by moth flies could explain these outbreaks.

We performed microbiologic analysis of all biofilm samples and moth flies by matrix-assisted laser desorption/ionization time-of-flight (MALDI-TOF) mass spectrometry (Bruker, https://www.bruker.com) and Phoenix automated microbiology system (Becton Dickinson, https://www.bd.com) according to European Committee on Antimicrobial Susceptibility Testing (EUCAST, https://eucast.org) guidelines. To visualize biofilms we used fluorescence in situ hybridization protocol on sections of embedded samples or moth flies (Appendix). We considered pathogens to be MDR if nonsusceptible to >1 agent in 3 of the defined categories, extensively-drug-resistant (XDR) if nonsusceptible to >1 agent in all but <2 of defined categories, and pan-drug resistant (PDR) if nonsusceptible to all listed antimicrobials (5). 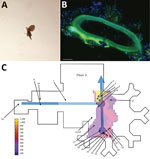 Figure 1. Investigation of multidrug-resistant bacteria spread by moth flies via biofilm in a hospital, Germany. A) Magnified Clogmia albipunctata moth fly. The length of the corpus is 2.5 mm. B) Fluorescence in...

Video 1. Multiple moth flies occurring through a drain of a bedpan-washer at location 6 in Table 1. The drain was chemically cleaned before and the bedpan-washer had been closed...

We identified the moth flies as C. albipunctata (Figure 1, panel A) and found that they had entered the hospital room from a forgotten shunt between the drains and the waste air system (Appendix). To confirm that sewage pipes contained bacterial biofilms and moth fly eggs, samples were taken from the pipes, fixed, and stained. Psychodidae eggs were found in the biofilm (Figure 1, panel B). Infestation with moth flies seemed to increase with proximity to the central drain (Figure 1, panel C). Furthermore, we observed that moth flies were able to pass through the water-filled siphon of a bedpan washer (Video 1) and we identified extensive biofilm in the drains (Video 2). 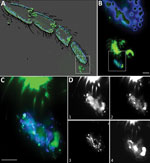 Figure 2. Fluorescence in situ hybridization (FISH) from a longitudinal section of a leg of a Clogmia albipunctata moth fly from a hospital in Germany. The fly was caught in the hospital, embedded,...

Fluorescence in situ hybridization and fluorescence microscopy on sections of embedded moth flies showed the presence of biofilms and bacteria on their feet (Figure 2). Not every moth fly caught was tested; however, representative moth flies from each identified location were tested. Furthermore, biofilm in sewage pipes revealed a kind of ecosystem consisting of moth fly larvae, vermicular, fungi, and bacteria (Appendix Figure 1). Subsequently we collected and microbiologically analyzed C. albipunctata and biofilm from different parts of the hospital (Tables 1, 2). Of the moth flies we analyzed microbiologically, we found that 41.1% carried MDR or even XDR bacteria (Appendix). Overall, 43.9% of specimens were MDR or XDR.

We subsequently examined pest control options. Our first approach, removing biofilm from accessible pipes in the sewage system, did not successfully reduce or eliminate moth flies. Our second approach, mechanically and chemically cleaning all sinks and proximal sewage lines, also did not prevent periodic reoccurrence of moth flies. Our third approach was more successful. We flushed all sinks in the OR at the same time with 60°C hot water for 15 min/wk, daily during summer, which suppressed C. albipunctata moth flies in the OR but not in the rest of the hospital.

Infection with and colonization by MDR bacteria is an increasing challenge in health care (6). Psychodidae (moth flies) are small, 1–4 mm in size, and have been regarded as unharmful vermin except in highly sterile areas. Therefore, they have often been overlooked or ignored and not considered a high-consequence problem.

The results of our study suggest a change in this point of view is needed. If generalized to other hospitals, our findings indicate that C. albipunctata moth flies in hospitals, combined with MDR, XDR, or PDR (pandrug-resistant) bacteria in biofilms, pose an underestimated threat. The danger from this symbiotic system between moth flies and these bacteria results from moth fly eggs and larvae living in biofilm that is contaminated by a patient’s bacterial flora. Furthermore, biofilms can rapidly grow and spread over distances kilometers in length (7) and are almost impossible to eradicate. In the third and fourth stages of development, larvae living in the biofilm can begin to move, thus overcoming the water barriers in showers, bathtubs, toilets, and other washing units. At this point, adult moth flies can enter the hospital (Video 1) and transport drug-resistant bacteria from the microbial flora of the biofilm into the hospital.

We frequently found Stenotrophomonas maltophilia on C. albipunctata moth flies and also in clinical samples from deep respiratory material, wounds, blood culture, urine, and bile. In 1 patient, for example, we found hospital-acquired S. maltophilia and a genetically identical strain in drains in a ward ≈250 m away (data not shown). Even though this evidence is scant, it does support our hypothesis.

In addition, low doses of antimicrobials excreted by patients can result in the quick development and spread of plasmids (resistance genes) and virulence factors in biofilms (8). This process might result in resistance developing not only in a patient’s microbiota but also in hospital biofilm. Our observations suggest that the adult C. albipunctata moth flies can move freely throughout sewage systems and that they carry bacterial biofilm on their feet. Many authors have suggested the existence of missing links in polyclonal outbreaks and in other hard-to-explain observations (9,10). We hypothesize that moth flies in symbiotic combination with biofilms could, in part, explain one such observed transmission. However, the findings of this study are limited by the moderate number of moth flies, which should be addressed in future investigations.

Currently, there are no proven strategies, including chemical methods, to prevent or eradicate moth flies in sewage systems. However, weekly or, during summer, daily flushing with hot water (60°C) for 15 min was sufficient to suppress the moth flies in our study. We propose a prevention protocol including flushing weekly or daily with hot water (60°C), mechanical removal of biofilms; deconstruction of unused siphons or replacement by heatable siphons; and checking for unexpected outlets, such as drill holes, from drains into hospital rooms. These measures will not eliminate but might substantially suppress the problem. Once moth flies leave the drains, among the few available biofilms are patient wounds. Research has reported that adult moth flies are attracted to them, and C. albipunctata larvae have been found in wounds (11,12). Searching for moth flies and determining their microbial load might be advisable, especially if an unexpected bacterial outbreak occurs. Finally, our observations should be taken into account in the planning of hospital sewage systems in the future.

Dr. Thomas Rupprecht is a lecturer at the University Erlangen Nürnberg and medical director at the hospital Bayreuth. His research interests are complex human and environmental biosystems, their influence on disease occurrence and treatment, and mathematical modeling in both.

The authors declare no conflict of interest.

Page created: April 29, 2020
Page updated: July 18, 2020
Page reviewed: July 18, 2020
The conclusions, findings, and opinions expressed by authors contributing to this journal do not necessarily reflect the official position of the U.S. Department of Health and Human Services, the Public Health Service, the Centers for Disease Control and Prevention, or the authors' affiliated institutions. Use of trade names is for identification only and does not imply endorsement by any of the groups named above.