Highly pathogenic avian influenza (HPAI) A(H5Nx) clade 2.3.4.4 viruses, which originated from the HPAI A(H5N1) clade 2.3.4 of the A/Goose/Guangdong/1/96-lineage in China, have spread globally, causing severe disease in poultry and wild birds (1–4). According to the World Health Organization, clade 2.3.4.4 viruses have evolved into 8 subclades, designated as clades 2.3.4.4a–h (https://www.who.int/influenza/vaccines/virus/202002_zoonotic_vaccinevirusupdate.pdf). In 2013, a novel reassortant A(H5N8) clade 2.3.4.4b virus was isolated from domestic ducks in eastern China (2); this virus was later detected in Korea and Japan (3). Since 2014, clade 2.3.4.4b viruses have spread to Europe and Africa along the migratory flyways of birds (4,5). These introductions caused large HPAI outbreaks in wild and domestic birds in Europe during the winter of 2016–17 (6). At the same time, wild birds carried clade 2.3.4.4c viruses to North America (4).

In early 2020, outbreaks of clade 2.3.4.4b viruses mainly occurred in Europe (7). Beginning in July 2020, several outbreaks of H5N8 viruses in poultry and wild birds were reported in Eurasia, including Kazakhstan, Russia, Poland, England, Netherlands, Korea, and Japan (7–10); outbreaks were not reported in China until October 2020, when clade 2.3.4.4b viruses related to those circulating in Eurasia were detected in 2 dead swans in Mongolia (11). Because eastern China is a major bird migration destination, migratory birds might carry HPAI viruses to this region. We detected 32 H5N8 viruses of 2 genetically distinct lineages in wild birds in eastern China. 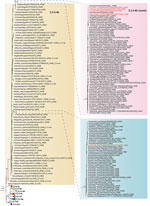 Results showed that the isolates belonged to clade 2.3.4.4b and formed 2 distinct genetic sublineages (Figure). The isolate JDS20103116-H5N8 clustered with the isolates found in East Asia (including South Korea and Japan) in late 2020, as well as the isolates found in Europe in late 2019 and early 2020 (14). The other 4 H5N8 isolates clustered with the viruses found in poultry and wild birds in Eurasia (including South Korea, Japan, China, and Europe) in late 2020. The cluster showed high bootstrap support; we proposed the clade to be a novel genotype of the 2.3.4.4b clade (Figure). The topologic structure of trees based on the other gene segments were identical to that of the tree based on the HA gene segment (Appendix Figure).

The novel genotype of the 2.3.4.4b clade also was closely related to viruses detected in poultry in Iraq in May 2020 and in Egypt in 2019, suggesting that these viruses might be the source of the novel genotype. After the outbreaks in Iraq, clade 2.3.4.4b viruses were detected in backyard poultry in Russia in late July 2020 and in wild birds in Russia and Kazakhstan in September 2020. In October 2020, those viruses were also prevalent among birds traveling along various migratory flyways of Europe and Asia (7–10). We speculate that these viruses circulated among domestic birds in Egypt and then among migratory birds in Russia before emerging in Eurasia in late 2020. Because of the lack of surveillance data at breeding sites in 2019 and early 2020, the transmission routes of these viruses remain unclear. In February 2021, an avian influenza H5N8 infection was reported in a person in Russia. The causative virus, designated A/Astrakhan/3212/2020H5N8, belonged to the 2.3.4.4b clade. These observations suggest that the H5N8 viruses in this novel genotype of 2.3.4.4b clade could infect a wide range of hosts and might spread globally, as did previous H5N8 outbreaks that spread from Asia to Europe and North America in 2014 (15).

Molecular analysis of HA cleavage sites demonstrated that the 5 H5N8 isolates contain multiple basic amino acids, PLREKRRKR/GL, which are characteristic of HPAI viruses. The HA1 receptor-binding sites of all 5 H5N8 isolates have amino acid residues Q226 and G228 (H3 numbering), indicative of an avian-like (a2, 3-SA) receptor-binding preference. We documented 2 new amino acid substitutions, T140A and N236D (H3 numbering), in the HA protein of the novel genotype of the 2.3.4.4b clade. The significance of these 2 new mutations remains undetermined. We did not find the E627K and D701N residues in the polymerase basic 2 protein, suggesting that the viruses have not adapted to mammal hosts.

During our annual surveillance, we detected 32 H5N8 HPAI viruses from migratory ducks without signs of illness in Shanghai, China. Results of phylogenetic analyses of 5 representative isolates showed that they belonged to 2 sublineages of H5N8 viruses circulating in this region. Some isolates clustered with a novel genotype of 2.3.4.4b clade that was identified in Europe and East Asia in late 2020. The detection of these H5N8 AIVs in asymptomatic migratory birds support the hypothesis that free-living wild birds play a crucial role in the dissemination of these viruses. More active surveillance is needed to detect new AIVs, especially in the breeding grounds and migratory sites of various birds. Because of their high genetic diversity, new AIVs might pose a substantial threat to global health.

This work was supported by grants from the National Key Research and Development Program (grant no. 2016YFD0500201), Shanghai Science and Technology Committee (grant no. 18DZ2293800), and Shanghai Wildlife-Borne Infectious Disease Monitoring Program.

Page created: August 09, 2021
Page updated: October 19, 2021
Page reviewed: October 19, 2021
The conclusions, findings, and opinions expressed by authors contributing to this journal do not necessarily reflect the official position of the U.S. Department of Health and Human Services, the Public Health Service, the Centers for Disease Control and Prevention, or the authors' affiliated institutions. Use of trade names is for identification only and does not imply endorsement by any of the groups named above.