Severe fever with thrombocytopenia syndrome (SFTS) is an emerging tickborne infectious disease caused by SFTS virus (SFTSV). We report 7 cases of spontaneous fatal SFTS in felines. Necropsies revealed characteristic lesions, including necrotizing lymphadenitis in 5 cases and necrotizing splenitis and SFTSV-positive blastic lymphocytes in all cases. We detected hemorrhagic lesions in the gastrointestinal tract in 6 cases and lungs in 3 cases, suggesting a more severe clinical course of SFTS in felids than in humans. We noted necrotic or ulcerative foci in the gastrointestinal tract in 3 cases, the lung in 2 cases, and the liver in 4 cases. We clarified that blastic lymphocytes are predominant targets of SFTSV and involved in induction of necrotic foci. We also found that thymic epithelial cells were additional targets of SFTSV. These results provide insights for diagnosing feline SFTS during pathological examination and demonstrate the similarity of feline and human SFTS cases.

Severe fever with thrombocytopenia syndrome (SFTS) is an emerging infectious disease characterized by acute onset of high fever, hemorrhagic tendency, gastrointestinal and neurologic symptoms, thrombocytopenia, and leukocytopenia (1–4). The causative agent of SFTS is a novel Dabie bandavirus, SFTS virus (SFTSV), of the family Phenuiviridae (5). On the basis of epidemiologic evidence, SFTS is classified as a tickborne disease, and the main reservoir and vector involving human infection is thought to be the Haemaphysalis longicornis tick (6,7). In addition, various species of domestic and wild mammals, including goats, sheep, cattle, pigs, dogs, cats, boars, and deer, have been found to harbor SFTSV genomic RNA or SFTSV antibodies (8–10). These data demonstrate the infectivity of SFTSV in these animal species and circulation of SFTSV between ticks and animals in nature. Reported cases of SFTS in cheetahs and domestic cats have shown that nonhuman mammalian species can develop fatal disease similar to human SFTS (11,12). Susceptibility of cats to SFTSV also was confirmed by experimental SFTSV infection in cats, which caused a high incidence of severe hemorrhagic fever (13). Analyses of these cases confirmed shedding of viral particles from saliva and feces (11,13), which can cause transmission of SFTSV from diseased animals to humans (14).

Analysis of animals with SFTSV infection can inform the pathogenesis of SFTS in humans. Experimental infection in wild type and α/β interferon receptor knockout mice, rhesus macaques (Macaca mulatta), and signal transducer and activator of transcription-2 knockout hamsters have been reported (15–19), but hepatitis and splenitis have been reproduced only in hamster models (19). However, hemorrhagic and necrotic lesions in the liver, spleen, intestines, and lymph nodes have been reported only in fatal SFTS cases in humans and experimentally infected felines (13,20–22). Investigations of disease in animals that mimics human SFTS is crucial for informing prevention of animal-to-human transmission and controlling virus transmission among animals and ticks. Analysis of fatal cases in felines can clarify the pathology of SFTS and inform STFS diagnosis in animals. We provide evidence of characteristic macroscopic and microscopic lesions collected from 7 cases of spontaneous fatal SFTS in felines.

We performed necropsies on 7 cats with SFTS symptoms, such as acute onset of thrombocytopenia, leukocytopenia, and lethargy (Table 1). We confirmed SFTSV infection by conventional reverse transcription PCR (RT-PCR) using 2 primer pairs targeting the small segment of the SFTSV genome (23). We collected and fixed tissue samples in 10% neutral buffered formalin and then processed the samples to create paraffin-embedded tissue sections. We cut tissue into sections 4-μm thick and stained sections with hematoxylin and eosin for histopathologic examination.

Figure 1. Gross pathology of lesions from cats with fatal severe fever with thrombocytopenia syndrome, Japan. A) Enlarged follicles (white spots) in the spleen. Ruler represents centimeters. B) Hemorrhage in the colon.... 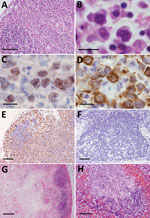 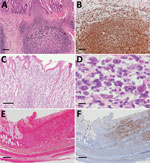 Figure 3. Histopathological lesions in the intestinal tracts from fatal cases of severe fever with thrombocytopenia syndrome (SFTS) in cats, Japan. A, B) Hematoxylin & eosin (HE)–stained (B) and immunohistochemistry-stained (A) ileum...

We noted SFTSV-positive blastic lymphocytes in the intestinal tract in all cases (Figure 3), mainly in the Peyer’s patches, the localized lymphoid follicular structure in the intestinal submucosa; some of these cells infiltrated the lamina propria (Figure 3, panels A, B). We observed infiltration of these cells in all hemorrhage lesions and ulcers (Figure 3, panels C, D), suggesting a relationship between blastic lymphocytes and lesions. 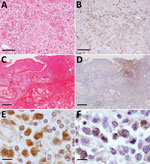 Figure 4. Necrotic foci in the liver and lung from fatal cases of severe fever with thrombocytopenia syndrome (SFTS) in cats, Japan. A, B) Hematoxylin & eosin (HE)–stained (A) and immunohistochemistry-stained (B)...

In the livers from 3 cats, we noted formation of small necrotic foci (Figure 4, panel A). The necrotic lesions always were surrounded by SFTSV-positive blastic lymphocytes (Figure 4, panel B), but the cells usually were distributed in the portal area. We also found bile pigmentation and hemophagocytic macrophages in the liver.

Immunohistochemistry revealed that SFTSV-positive signals were limited to the blastic lymphocytes, and these were of B cell lineage and expressed CD79a (Figure 2, panel C). We performed further characterization by using immunohistochemical stains against Ig lambda chain and Ki67. The results demonstrated that SFTSV-positive atypical lymphocytes expressed Ig lambda chain and Ki67 (Figure 4, panels E, F). Hence, we considered these cells plasmablasts, which are immature plasma cells retaining proliferation activities.

SFTSV-Positive Cells in the Thymus

In addition to blastic lymphocytes, we found SFTSV-positive cells with spindle-to-polygonal morphology in the thymus gland. Double immunofluorescence analysis of SFTSV and cytokeratin revealed that these cells were thymic epithelial cells (Figure 6).

We analyzed the pathological changes in 7 fatal cases of SFTS in domestic felids. We detected characteristic lesions in the lymphoid organs, including the lymph nodes and spleen. We observed gross enlargement and hemorrhage of multiple lymph nodes and formation of white spots in the spleen in all 7 cases (Figure 1, panel D). Because these findings are highly suggestive of but not specific for feline SFTS, additional cases with these findings should be further examined to confirm viral infection by testing, such as RT-PCR.

Similar to human cases (20–22), we frequently observed necrotic lymphadenitis in this study and found accumulation of SFTSV-positive atypical lymphocytes in all 7 cases (Table 2). In addition, all 7 cats had necrotic splenitis, similar to human SFTS cases (20,21). Therefore, lesions in the lymphoid organs, or accumulation of atypical B cells can be considered characteristic and highly specific for lesions in SFTS for both humans and felines. Furthermore, these lesions can be useful indicators of whether experimental infection in laboratory animals appropriately reproduces spontaneous SFTS. In fact, feline cases of experimental infection showed necrotic lymphadenitis and splenitis (13).

Although some reports have detected SFTSV antigens in macrophages, our study demonstrated that SFTSV-positive cells mostly were blastic lymphocytes (Figure 2, panels B–D; Figure 4, panels E, F). Immunofluorescence revealed that only punctate signals were detected in the macrophages (Figure 5). This result indicates that macrophages can phagocytose SFTSV but do not support SFTSV replication. Our findings also showed that SFTSV targets the cells of B-cell lineage and that plasmablasts were the predominant site of viral replication. Such tropism of SFTSV to plasmablast also has been reported in human cases and in vitro analysis clarified SFTSV targeted plasmablastic cell line, not B cell lymphoma cell lines (25). However, why large numbers of plasmablasts appeared and accumulated in the lymph nodes remains unclear. Dysregulated immunological response of plasmablasts to SFTSV infection and viral modulation of host-plasmablast dynamics are 2 possible causes of plasmablast accumulation in the lymph nodes. Furthermore, in all cases, we found SFTSV-positive blastic lymphocytes in and around the intestinal ulcerative lesions (Figure 3, panel F) and necrotic foci in the liver and lungs (Figure 4, panels A–D), suggesting a role of blastic lymphocytes in the pathogenesis of ulcers and necrotic lesions. Depositing of Ig in the necrotic foci and expression of death ligands in SFTSV-positive cells should be analyzed in future cases. Expression of cell death-inducing factors on SFTSV-positive blastic lymphocytes, such as self-reactive Ig and death ligands, could indicate a relationship between these cells and necrotic foci; further study is warranted. Our study demonstrated that the thymic epithelial cells can be another target of SFTSV. However, the significance of viral infection in the thymic epithelium is unclear.

Gastrointestinal manifestation is one of the clinical features of human SFTS (1–4). A lethal case of severe intestinal hemorrhage and another case of multiple gastrointestinal ulceration have been reported in humans (20,26). However, the incidence of these lesions is unclear because cases without obvious intestinal findings also have been reported (21). Experimental SFTSV infection in cats and our results have demonstrated a high rate of gastrointestinal hemorrhage (6/7 cases; Figure 1, panel A) and gastrointestinal ulcers (3/7 cases; Figure 3, panel E), which suggests that human and feline cases share a common pathogenesis and that feline cases show more severe gastrointestinal lesions than human cases (13). Pulmonary hemorrhage and necrotic foci also suggest the severity of feline SFTS. This severe pathogenesis in many tissues can cause high lethality, ≈70% (27), suggesting that feline SFTS is a typical lethal viral hemorrhagic fever.

Jaundice was frequently observed in our cases (Table 2) and in experimental infection in cats (13). Also, marked elevation of serum hepatic enzymes were detected in most cases (Table 1). However, in this study, morphologic lesions in the liver were only sporadic small necrotic foci, insufficient to cause systemic jaundice and marked elevation of serum hepatic enzymes. Microscopic lesions of the liver were also mild in human SFTS cases and in cats with experimental infection (13,21). These findings suggest microscopically undetectable hepatic damage or functional failure of the hepatobiliary system. Further analysis is needed to clarify the mechanism of liver damage in SFTS.

Our study demonstrated typical lesions of spontaneous fatal cases of feline SFTS, consisting of similar pathological lesions and a more severe hemorrhagic tendency than in human SFTS cases. Information on disease in animals that mimics human SFTS can help prevent animal-to-human transmission. Thus, we believe feline models can be used to study the pathogenesis of SFTS.

Dr. Sakai is an assistant professor in the Laboratory of Veterinary Pathology, Joint Faculty of Veterinary Medicine, Yamaguchi University. His research interests include the histopathology and molecular pathology of animal infectious diseases, especially zoonotic viral diseases.

We thank Shigeru Morikawa for providing the antibody against SFTSV. We also thank Shiho Hamada and Mari Shimizu for supporting the necropsy and laboratory work.

This research was supported by Japan Agency for Medical Research and Development under grant no. 20fk0108069.

Page created: February 17, 2021
Page updated: March 18, 2021
Page reviewed: March 18, 2021
The conclusions, findings, and opinions expressed by authors contributing to this journal do not necessarily reflect the official position of the U.S. Department of Health and Human Services, the Public Health Service, the Centers for Disease Control and Prevention, or the authors' affiliated institutions. Use of trade names is for identification only and does not imply endorsement by any of the groups named above.