Azithromycin-nonsusceptible Neisseria gonorrhoeae strains are an emerging global public health threat. During 2015–2018, the prevalence of azithromycin-nonsusceptible gonococcal infection increased significantly in Argentina. To investigate the genomic epidemiology and resistance mechanisms of these strains, we sequenced 96 nonsusceptible isolates collected in Argentina during 2005–2019. Phylogenomic analysis revealed 2 main clades, which were characterized by a limited geographic distribution, circulating during January 2015–November 2019. These clades included the internationally spreading multilocus sequence types (STs) 1580 and 9363. The ST1580 isolates, which had MICs of 2–4 μg/mL, had mutations in the 23S rRNA. The ST9363 isolates, which had MICs of 2–4 or >256 μg/mL, had mutations in the 23S rRNA, a mosaic mtr locus, or both. Identifying the geographic dissemination and characteristics of these predominant clones will guide public health policies to control the spread of azithromycin-nonsusceptible N. gonorrhoeae in Argentina.

Gonorrhea, caused by infection with the bacterium Neisseria gonorrhoeae, is the second most prevalent bacterial sexually transmitted infection (STI) globally (1,2). The World Health Organization (WHO) estimated that in 2016, a total of 86.9 million incident gonorrhea cases occurred among persons 15–49 years of age, including 13.8 million cases in the WHO Region of the Americas (1). Researchers have documented antimicrobial resistance (AMR) to all drugs used to treat gonorrhea (2,3). Ceftriaxone, an extended-spectrum cephalosporin, is the last option for first-line empirical treatment, but the emergence of ceftriaxone resistance has raised concerns about future treatments (2,4). Consequently, WHO guidelines and national guidelines of many countries now recommend a combination of ceftriaxone (250 mg–1 g) and azithromycin (1–2 g) as first-line treatment for uncomplicated gonorrhea (5,6). However, in 2016 Fifer et al. (7) reported the failure of dual therapy. Two years later, a gonococcal strain with ceftriaxone resistance and high-level azithromycin resistance was isolated in Australia and England (8–10). In recent years, international reports of azithromycin-resistant N. gonorrhoeae have substantially increased (2,3,11,12). The WHO Global Gonococcal Antimicrobial Surveillance Program showed that in 2016, a total of 48.4% of reporting countries had an >5% increase in rates of azithromycin resistance (3).

Argentina has reported low azithromycin resistance levels since the early 2000s (13). In Argentina, the proportion of azithromycin-nonsusceptible isolates (i.e., requiring MICs ˃1 μg/mL) increased from 0.1% in 2015 to 4.3% in 2018 (p˂0.01) (14). The Clinical and Laboratory Standards Institute currently states a susceptible-only breakpoint for azithromycin (15); for simplicity, we refer to these isolates as resistant. High-level azithromycin-resistant isolates requiring MICs >256 μg/mL have emerged in several countries, including Argentina (16–20). Azithromycin resistance threatens the effectiveness of dual antimicrobial gonorrhea treatment.

For phylogenetic analysis, we identified single-nucleotide polymorphisms (SNPs) in sequence reads mapped against the WHO P reference genome using the variant calling tool Snippy version 4.4.5 (https://github.com/tseemann/snippy). We identified and filtered recombinant regions using Gubbins version 2.1.0 (Sanger, https://sanger-pathogens.github.io/gubbins); the resulting core SNP alignment consisted of 9,415 sites. We used IQ-tree version 1.6.1 (http://www.iqtree.org) to infer a maximum-likelihood tree from the whole-genome SNP alignment with a generalized time-reversible model of evolution using gamma correction for among-site rate variation with 4 rate categories; branch support was estimated by bootstrap analysis of 10,000 replicates (32). We visualized the resulting phylogeny with Figtree version 1.4.4 (http://tree.bio.ed.ac.uk/software/figtree) and phandango (33). We clustered sequences using RAMI with a branch length threshold of 0.01 (34). For comparison, we selected international isolates and publicly available genomic data on the basis of MICs, MLST STs (i.e., ST9363 and ST1580), and NG-MAST genogroups (i.e., G470 and G12302) from the National Center for Biotechnology Information (https://www.ncbi.nlm.nih.gov), European Molecular Biology Laboratory (https://www.embl.org), and the DNA Data Bank of Japan (https://www.ddbj.nig.ac.jp). We found 17 genomes from the United Kingdom, 3 from Canada, 3 from Scotland, 17 from Australia, 28 from the United States, 7 from Brazil, and 11 from Norway (16,17,24,25,35–37). We generated a phylogenetic tree of 86 international and 96 isolates from Argentina as described for domestic isolates and visualized the tree in Figtree version 1.4.4. Sequence reads are available from the European Nucleotide Archive (accession no. PRJEB41007). 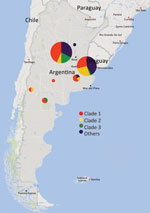 Figure 1. Geographic distribution of Neisseria gonorrhoeae isolates with azithromycin MICs of >2 μg/mL, Argentina, January 2005–November 2019. Circle size corresponds to the number of isolates in each...

Analysis of the phylogenomic tree revealed 14 clades. In total, 63 (65.6%) isolates were grouped into 3 clades, each containing 10–38 isolates (Figure 2) (https://microreact.org/project/AZM_Project/006b822d). The remaining 33 isolates were singletons or belonged to smaller clonal groups of 2–6 isolates each.

Figure 3. Phylogenomic tree of Neisseria gonorrhoeae isolates with azithromycin MICs of >2 μg/mL, 2004–2017. A) MLST ST1580 and NG-MAST genogroup 470 isolates from Argentina in the context...

We characterized the genomes of azithromycin-resistant N. gonorrhoeae isolates collected in Argentina during 2005–2019. Phylogenomic analysis showed that isolates from Argentina clustered into distinct clades, including 3 clades comprising 63 (65.6%) isolates collected during 2016–2019. All isolates also were resistant to benzylpenicillin, tetracycline, and ciprofloxacin, or some combination, but susceptible to ceftriaxone and cefixime.

In Argentina, dual therapy is recommended as first-line treatment for uncomplicated gonorrhea, according to the WHO guidelines (6). The Argentine Ministry of Health and the Sociedad Argentina de Infectología recommend a single 1-g dose of azithromycin monotherapy for the treatment of Chlamydia trachomatis and Mycoplasma genitalium infections (41,42). These guidelines also recommend antimicrobial treatment for suspected infections. Azithromycin has a long half-life, resulting in detectable drug concentrations in human plasma for up to 14 days (43). Undiagnosed N. gonorrhoeae infections concurrent with the treatment of C. trachomatis and M. genitalium infections might lead to prolonged exposure to subinhibitory concentrations of azithromycin, thereby prompting the induction of or selection for resistance genes. In the United States and United Kingdom, dual therapy is no longer the first-line treatment. Instead, high-dose ceftriaxone monotherapy (500 mg in the United States or 1 g in the United Kingdom) is now recommended for treatment of uncomplicated gonorrhea (44,45). Moreover, additional treatment with doxycycline (100 mg 2×/d for 7 d) is recommended if chlamydial infection has not been excluded (44). Similar empirical antimicrobial therapies for gonorrhea and chlamydial infections might be of benefit in Argentina to reduce patient exposure to azithromycin and avoid the emergence of resistant gonococcal strains.

Azithromycin resistance (i.e., MICs of >2 μg/mL) in N. gonorrhoeae has been mainly associated with mutations in the 23S rRNA target (38). The 23S rRNA A2059G mutation causes high-level resistance (i.e., MICs of >256 μg/mL) and the C2611T mutation causes low-level resistance (i.e., MICs of 2–16 μg/mL) (38). We found that 75% of isolates had the C2611T mutation. These isolates were phylogenetically diverse; however, clade 1, which was predominated by MLST ST1580 and NG-MAST G470, comprised 38 (52.8%) isolates. NG-MAST ST470 has been associated with high-level resistance to azithromycin in Scotland (18). In addition, NG-MAST ST470 has >99% similarity to ST9768, which caused an outbreak of high-level azithromycin-resistant N. gonorrhoeae in the United Kingdom (16). Previous gonococcal evolution studies have estimated that ≈4 (range 0–14) SNPs occur per year per genome, enabling phylogenetic analysis (21). Isolates from Argentina differed from isolates from Scotland by >4 (mean 7.9) SNPs and the United Kingdom by 13 (mean 16.8) SNPs. In addition, NG-MAST ST470 isolates from the United States, Brazil, and Australia, all of which showed low-level resistance to azithromycin, were closely related to isolates from Argentina (mean 7–11 SNPs). These findings support the hypothesis that NG-MAST G470 strains from Argentina might be descended from 1 lineage of the ST470 clone, which has spread internationally and can develop high-level and low-level resistance to azithromycin. Previous research, especially that of Unemo et al. (38), hypothesized that gonococcal antimicrobial-resistant strains emerge through genetic events, such as horizontal gene transfer or spontaneous mutations; these strains can spread quickly within a geographic region through sexual networks. Furthermore, compensatory mutations or gene exchange might have preserved this lineage in Argentina. The presence of additional STs, such as the co-circulation of MLST ST1584 and MLST ST1580 (NG-MAST G470), suggests that novel introductions also have occurred.

The mtr locus recently has been described as a hotspot for genetic recombination; mosaic-like mtr loci are associated with decreased susceptibility to azithromycin (i.e., MICs of 1–4 μg/mL) and contribute to the survival and transmission of N. gonorrhoeae (39,40, 46). Most clade 2 isolates were associated with MLST ST9363 and had a mosaic-like mtr locus. MLST ST9363 was the predominant strain type of isolates with MICs of 2–4 μg/mL identified in Australia during 2017 and the United States during 2014–2017 (24,25,35). We found that MLST ST9363 isolates from Argentina shared a high level of genomic similarity with the ST9363 clones reported in Australia, the United States, Canada, Norway, and Brazil, indicating that importation and dissemination has occurred. Those data further support the hypothesis that N. gonorrhoeae isolates carrying a mosaic-like mtr locus contribute to the emergence of isolates with low-level resistance to azithromycin in many countries (24,25). Isolates with MICs of >256 μg/mL have recently reemerged in Argentina (20). Those isolates belonged to clade 2 and were distinguished by the mosaic-like mtr locus and the A2059G mutation in all 4 23S rRNA gene alleles. The phylogenetic tree showed that these isolates were closely related to isolates from Norway (mean 10.2 SNPs) that also had MICs of >256 μg/mL, suggesting that strains carrying a mosaic-like mtr locus and 23S rRNA A2059G mutation can disseminate internationally. Previous studies have suggested that isolates carrying the A2059G mutation or mosaic mtr locus have enhanced fitness; elucidating the effects of both mechanisms on N. gonorrhoeae evolution might help predict the emergence and spread of azithromycin resistance (39,46,47).

Because we received a small number of isolates from some provinces, our dataset might have been limited by selection bias. In addition, we did not have access to therapy strategies and treatment success rates, which might have provided insight into the generation of resistance or the selection of azithromycin-resistant isolates. Finally, we obtained limited data regarding patients’ sexual orientation and HIV status, but found that clade 2 strains were slightly more associated with male patients, including men who have sex with men, than clade 1 strains (100.0% vs. 92.1%). In addition, 3 patients who had infections caused by clade 2 strains were HIV-positive (data not shown). Increased awareness of the transmission dynamics of azithromycin-resistant gonococcal strains within sexual networks is crucial to confirming these observations. Continuing surveillance of the prevalence and distribution of azithromycin-resistant strains in addition to genomic monitoring using individual-level epidemiologic data should provide a more complete picture of azithromycin-resistant gonococcal strains. These data will inform public health strategies to control azithromycin-resistant N. gonorrhoeae.

In conclusion, the recent increase in the prevalence of azithromycin-resistant N. gonorrhoeae isolates in Argentina was mainly the result of the introduction and expansion of 2 clones belonging to MLST ST1580 and ST9363. The integration of appropriate STI diagnosis and antimicrobial prescription into health services combined with genomic, phenotypic, and epidemiologic gonococcal surveillance data will be critical in preventing the dissemination of gonococcal clones resistant to azithromycin, ceftriaxone, or both, and preserving the current available therapeutic option for gonorrhea.

We are grateful to Beatriz Lopez for her commentary on the manuscript.

1Members of this group are listed at the end of the article.

Page created: July 01, 2021
Page updated: August 17, 2021
Page reviewed: August 17, 2021
The conclusions, findings, and opinions expressed by authors contributing to this journal do not necessarily reflect the official position of the U.S. Department of Health and Human Services, the Public Health Service, the Centers for Disease Control and Prevention, or the authors' affiliated institutions. Use of trade names is for identification only and does not imply endorsement by any of the groups named above.