Ehrlichia spp. are tickborne obligate intracellular bacteria and comprise different pathogenic species that affect both veterinary and public health (1). Ehrlichia minasensis was first detected in cattle and deer in Canada and later in cattle and Rhipicephalus microplus ticks from Brazil (2–4). Infected cattle manifest signs that include fever, lethargy, depression, and anorexia (3,4). Borrelia theileri belongs to the relapsing fever group of borreliae and causes bovine borreliosis, which is a mild febrile disease associated with lethargy, hemoglobinuria, and anemia (5). This spirochete is transmitted by Rhipicephalus (formerly Boophilus) sp. ticks and has been documented in Africa, Europe, Oceania, and South America (5,6). To our knowledge, E. minasensis or B. theileri infections have not been reported in cattle from Colombia. 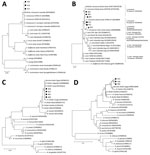 These results showed the simultaneous circulation of E. minasensis, B. theileri, and A. marginale in bovids from Cauca department, Colombia. In Latin America, E. minasensis has been identified in Brazil (7) and Colombia (found in R. microplus ticks) (8), and B. theileri has been found in Argentina (6), Mexico (9), and Brazil (10). The R. microplus tick is likely the main vector for both pathogens in these regions and has been confirmed by molecular detection of E. minasensis in tick specimens collected from the same animals (H.C. Martínez-Diaz, unpub. data) and various reports in Latin America for B. theileri (9,10). Despite the lack of clinical signs in these animals, tickborne infections caused by these pathogenic bacteria often occur as subclinical infections or with intermittent clinical manifestations. E. minasensis and B. theileri infections, either separately or as co-infections, may be more frequent than previously recognized and should be considered potential etiologies of febrile syndrome in cattle from this and other regions of Colombia.

We thank all personnel involved in sample collection in Cauca, Colombia.

Page created: July 21, 2022
Page updated: September 21, 2022
Page reviewed: September 21, 2022
The conclusions, findings, and opinions expressed by authors contributing to this journal do not necessarily reflect the official position of the U.S. Department of Health and Human Services, the Public Health Service, the Centers for Disease Control and Prevention, or the authors' affiliated institutions. Use of trade names is for identification only and does not imply endorsement by any of the groups named above.